While the opposite was true for Auburn basketball, last season was a difficult year for the Auburn football program. The Tigers finished 6-7 with a 3-5 mark in the SEC and five straight losses to close the season, including a loss to Mississippi State and a tough Iron Bowl loss to the Alabama Crimson Tide that went through four overtime periods. It was a year that saw SEC rivals battle it out for the national championship, with the Georgia Bulldogs coming out on top, while Auburn lost to Houston in the Birmingham Bowl. After that, they lost their three-year starting quarterback and a handful of other players to the transfer portal. That being said, there is still much to be excited about on The Plains in 2022.

With last season in the rearview, Auburn brings back one of the best defensive pairings in the country and an impact running back. While still a ways away from returning to its status as a college football powerhouse, Auburn should have a stronger season this year. Here are the five Auburn football players that will help get them there. 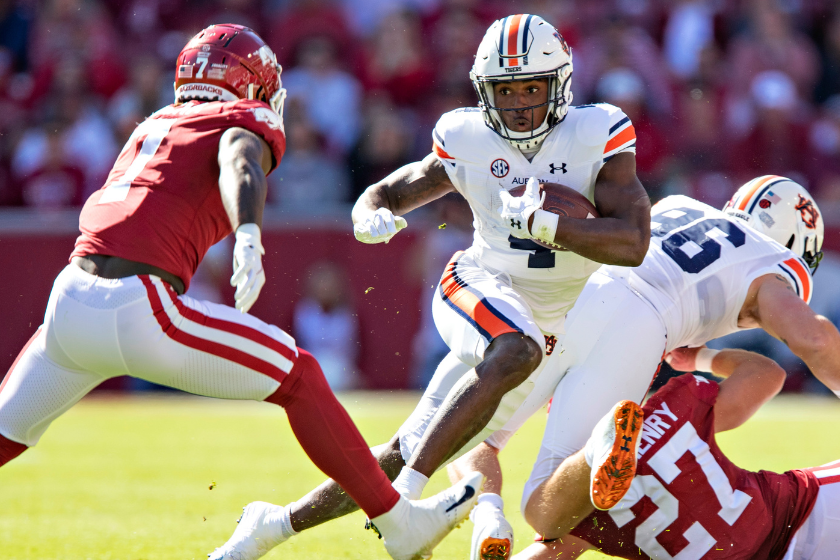 Tank Bigsby probably had one of the more disappointing seasons in 2021. While his numbers improved from his freshman year, they didn't meet the high expectations many had for him. There was even talk of Bigsby entering the transfer portal in the wake of the changing Auburn offensive philosophy. But Tank Bigsby is set to stick it out down on The Plains, and we think he could end up being a top back in 2022. In fact, he is currently ranked as one of the top 12 players in the SEC. Auburn's offense will revolve around him, giving him one more chance to meet and exceed those high expectations. 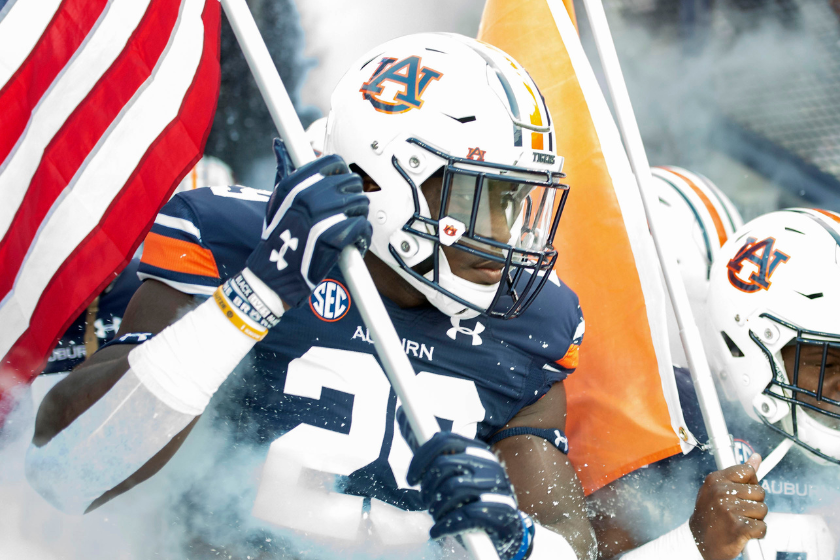 ESPN's Todd McShay thinks defensive lineman Derick Hall could be a first-round selection in the 2023 NFL draft, and we think most Auburn fans would agree. How could you not when looking at his 52 tackles and career-high 9.0 sacks from last year? Hall's sack total was good enough for 3rd in the SEC and led to Second Team All-SEC honors in his sophomore season. Look for that dominance on the defensive line to continue as Hall looks poised to lead this defense along with Colby Wooden on the other end of the line in 2022. 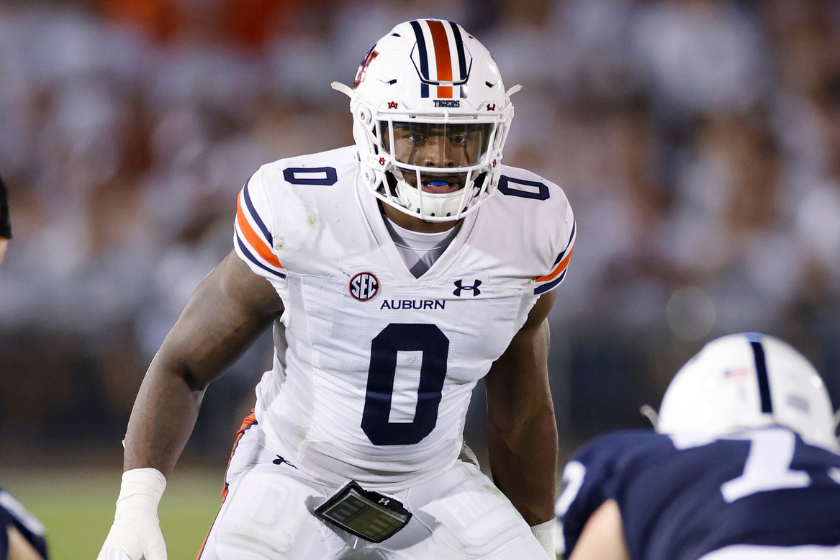 Owen Pappoe returns as the lone starting linebacker from last season as Zakoby McClain left for the NFL. Injuries derailed Pappoe's 2021 momentum, but the former five-star recruit racked up 93 tackles and four sacks in 2020. The team captain has unbelievable raw talent and great field IQ. Along with Derick Hall, the duo will be one of the most feared in the SEC if they can remain healthy. 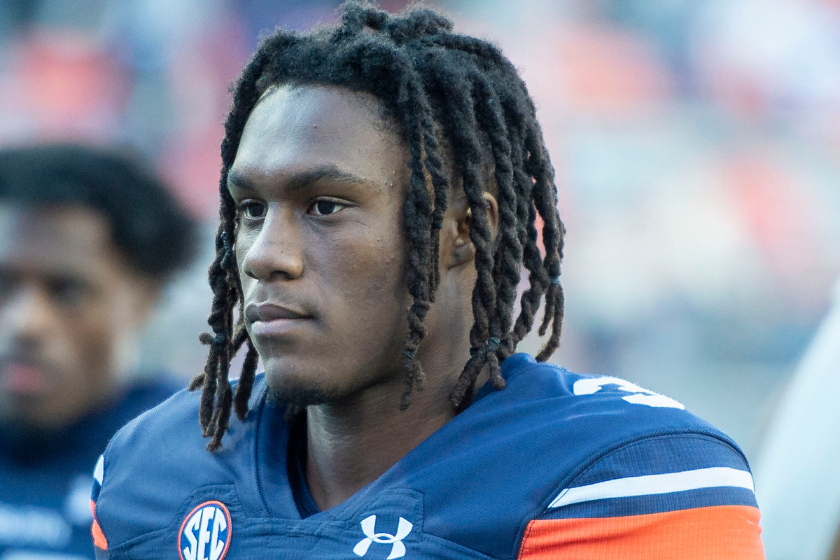 The speedy freshman wide receiver should start to get noticed early and often by SEC defenses with his athleticism and play-making ability. He was utilized as a gadget receiver in the A-Day scrimmage in April, getting the ball on more than one end around to go with his three receptions for 28 yards. Dawson is a bit undersized at 5-foot-10 and 161 pounds, but we think he will get targets based on his speed. Look for Auburn to use tight end John Samuel Shenker as a check-down option and use Dawson as a deep threat. The question is, will head coach Bryan Harsin continue to use him in gadget packages? We think it's criminal if he doesn't. 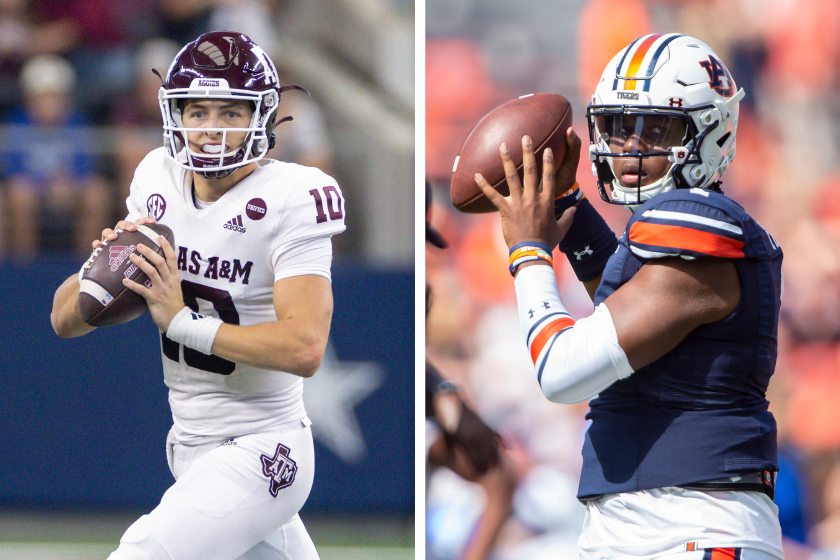 RELATED: Auburn's Colors Were Stolen From Another School

Three-year starter Bo Nix transferred to Oregon, leaving a wide-open quarterback competition this summer on The Plains. Zach Calzada was brought in from Texas A&M to compete with TJ Finley, who previously transferred from LSU. Finley tossed six touchdowns to one INT in his limited work behind Nix last year, so he has the inside track. Adding to Finley's lead is the fact that a shoulder injury kept Calzada out of the spring game.

However, where Finley lags, Calzada excels. Deep ball accuracy is something Finley has struggled with, going 3-for-22 on passes exceeding 20 yards (this was at LSU in 2020 mind you). Calzada, on the other hand, had a 45.5 percent accuracy rate on balls 20 yards or more downfield and is far more mobile than his counterpart. We think Calzada will win the starting position if that shoulder is rehabbed by camp. If not, then expect Finley to receive the ball from Nick Brahms, Auburn's center, to start the season.