5 Auburn Traditions That Every Tigers Fan Should Know 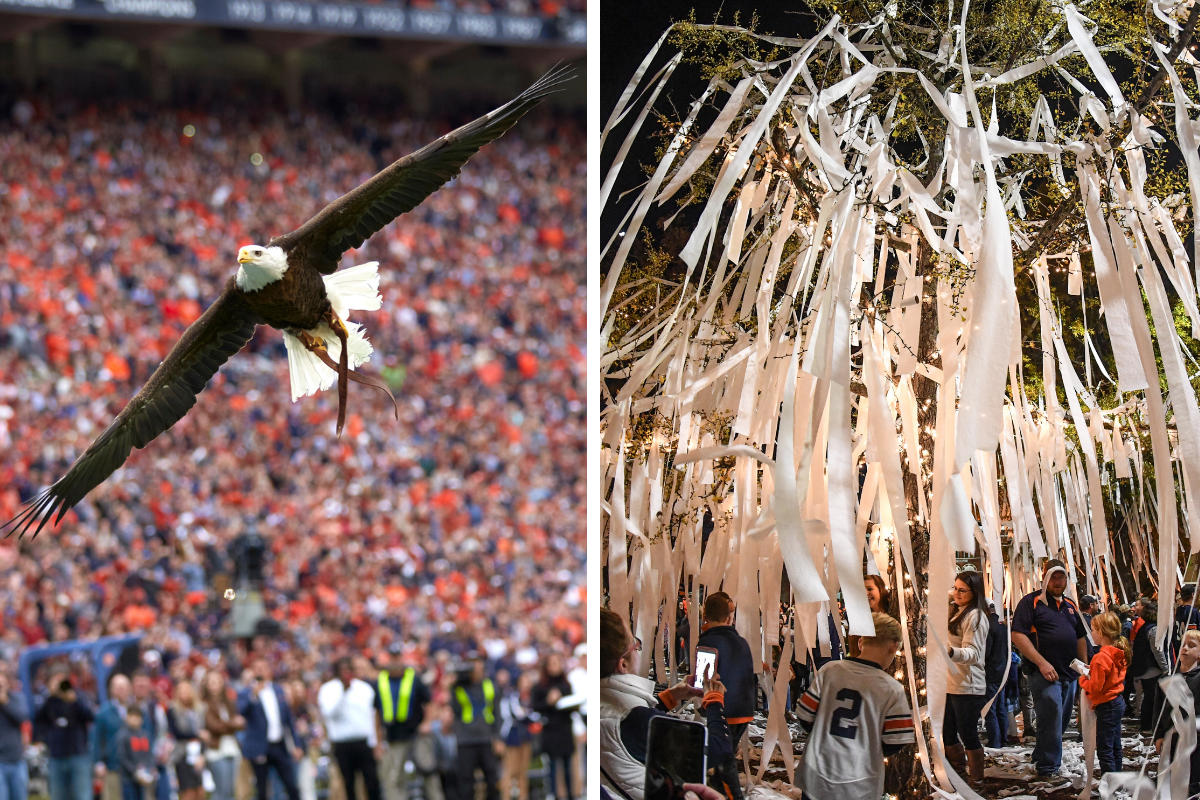 Traditions are the heartbeat of college football. From marching bands to mascots to fight songs to tailgates, there are plenty of opportunities to show your school pride on Saturdays in the fall.

It’s no different in Auburn, Alabama.

Auburn University is the home of the Auburn Tigers. Generations of students roll through The Plains wearing orange and blue until it goes out of fashion. (Some say it never has.) No matter what you’re wearing, all that matters is showing your Auburn spirit on game day.

Traditions are bountiful during a college football game. At Auburn, there are five that stand above the rest.

5 Auburn Traditions Every Tiger Should Know

“I believe that this is a practical world and that I can count only on what I earn. Therefore, I believe in work, hard work.

I believe in education, which gives me the knowledge to work wisely and trains my mind and my hands to work skillfully.

I believe in honesty and truthfulness, without which I cannot win the respect and confidence of my fellow men.

I believe in a sound mind, in a sound body and a spirit that is not afraid, and in clean sports that develop these qualities.

I believe in obedience to law because it protects the rights of all.

I believe in the human touch, which cultivates sympathy with my fellow men and mutual helpfulness and brings happiness for all.

I believe in my Country, because it is a land of freedom and because it is my own home, and that I can best serve that country by “doing justly, loving mercy, and walking humbly with my God.

And because Auburn men and women believe in these things, I believe in Auburn and love it.”

Auburn fans are required to learn how to say “War Eagle” as soon as they can talk. The famous battle cry can be heard at every Auburn game, no matter the sport. Although the tradition has various origin stories, greeting fellow Tiger fans with a “War Eagle” immediately creates a shared bond, especially after an Auburn win.

Speaking of Eagles, Auburn’s most famous tradition involves a live Eagle circling the stadium and landing on the midfield logo before kickoff. Whether you’re an Auburn fan or not, seeing an Eagle fly up close brings on goosebumps.

The Eagles of Auburn symbolize strength, power and courage while also promoting wildlife conservation. The majestic raptors are golden eagles most of the time. However, bald eagles, like Spirit, will sometimes grace the sky of Jordan-Hare Stadium.

Donahue Drive is the place to be two hours before every home game kickoff. Auburn fans will line the street to cheer on the football team as they make their way from the Athletics Complex to Jordan-Hare. Joined by Aubie the Tiger, the marching band and thousands of fellow fans, the Tiger Walk shows support for the team before it heads into battle.

The first time the Tiger Walk took place at Jordan-Hare was before the 1989 Iron Bowl. It’s a staple of Auburn football.

The best place to head after an Auburn win is Toomer’s Drugs at the corner of Magnolia Avenue and College Street. The famous drug store was the home of the only telegraph in town back in the day and informed fans of Tiger road victories by throwing ticker tape over power lines.

The tradition has evolved into throwing toilet paper over the famous Auburn oak trees. Rolling Toomer is a timeless Auburn tradition that feels extra special with wins over Alabama, LSU and Georgia.