Why on Earth Did Temple Football Have Stormtroopers on the Sidelines? 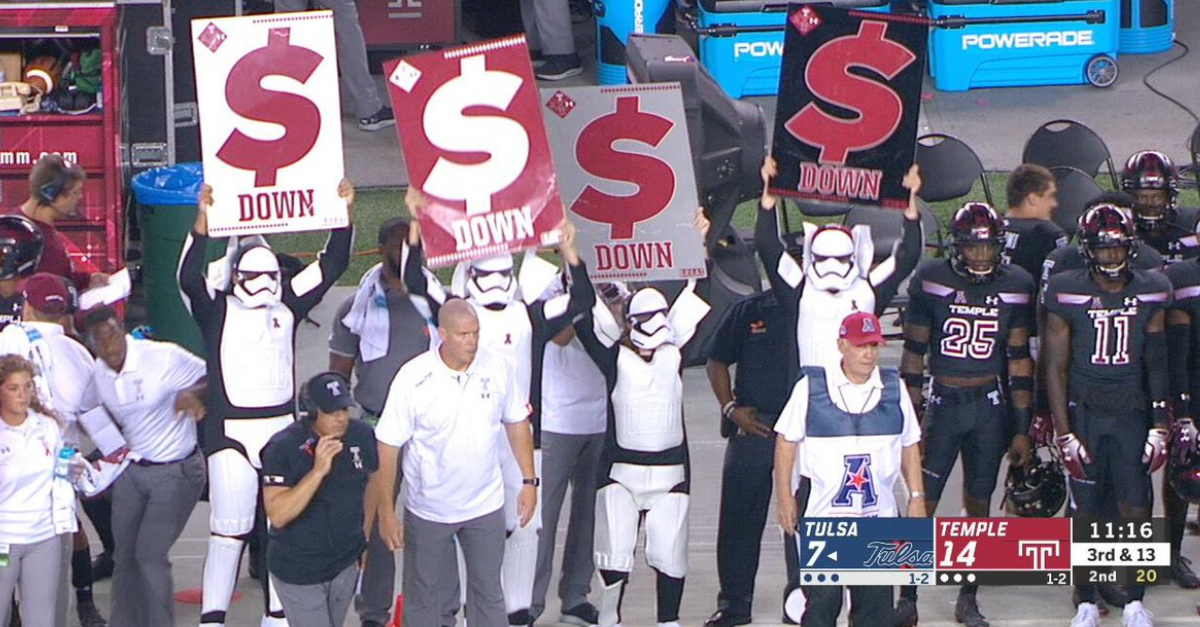 For those who were looking for a football game to watch Thursday night, there was a pretty epic and historic one for the Cleveland Browns. There was even a big party after it, too. But for those who didn’t catch that, or choose to boycott the NFL, then Temple against Tulsa was easily the next best option.

The Temple Owls took it to the Tulsa Golden Hurricanes, 31-17, at Lincoln Financial Field in Philadelphia, Pennsylvania. The actual American Athletic Conference game itself wasn’t nearly as exciting as the mayhem that took place on the Temple sideline during the contest.

In a college football world with gaudy turnover chains, and even turnover thrones, the Owls had a few stormtroopers — famously from the epic Star Wars movies — holding signs and jumping up and down.

What in the HELL is going on on Temple's sideline??? pic.twitter.com/lKJFu18YlB

Well, here are the answers.

The what is simple: Temple has stormtroopers on the sidelines, holding “$ DOWN” signs, and jumping like crazy to let the Owls and the crowd know it is third down and the Owls mean business.

The why is just as simple: The Temple Owls are trying to cause as much mayhem as possible on third downs, and this is the team’s creative way to do so. Temple University has also embraced “the dark side” from Star Wars and even created the @_DARKside18 Twitter handle for its defense.

Did it work? Did it ever.

Those are some seriously fierce numbers and the plays were even more spectacular.

At Temple, it’s all about #GETtheBALL, and it showed the college football-watching nation on ESPN just how dangerous this defense can be.

Look out, AAC. The Temple Owls mean business and chances are they are looking to distract you with a few stormtroopers, too.