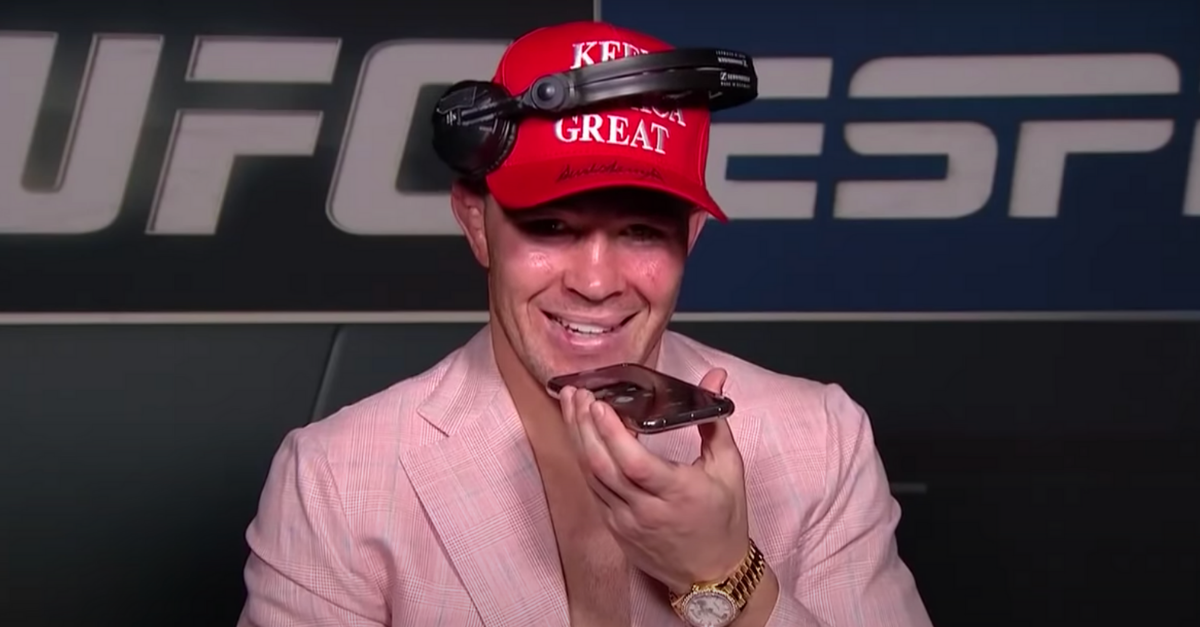 Colby Covington is a confident dude. Whether it?s in the Octagon or talking into a microphone, he isn?t afraid to show off his talent or tell you exactly how he feels. The MMA fighter embraces the spotlight and he was on a completely different level Saturday night in Las Vegas.

Covington defeated former champion Tyron Woodley in the UFC Vegas 11 main event. The fifth-round TKO was massive in his pursuit for the UFC welterweight title. He felt on top of the world.

Then, during his post-fight interview on ESPN, Covington received a phone call from President Donald Trump.

Colby Covington supports President Donald Trump. In fact, he wants you to know he does. He made that loud and clear after his grudge match with Tyron Woodley, who suffered a rib injury during the fight.

With an American flag over his shoulders, Covington called out former Vice President Joe Biden about the upcoming presidential election and even Los Angeles Lakers superstar LeBron James in an unexpected rant.

?Ladies and gentlemen, the silent majority is ready to make some noise. If you thought that was a beating, wait until Nov. 3 when Donald Trump gets his hands on sleepy Joe. That?s going to be a landslide.

Social media went crazy over those comments, but Covington wasn?t done there. He wore a ?Keep America Great? hat to do his ESPN post-fight interview and then his phone rang. It was President Trump on the line. The POTUS wanted to call to congratulate the UFC fighter on his victory and Covington put it on speaker phone.

?Thank you so much, Mr. President,? Covington replied. ?You gave me the dragon energy when you shook my hand on Sunday at your rally. It doesn?t matter if King Kong was in front of me, I was not going to lose after getting to shake your hand.?

?You weren?t going to lose,? the President of the United States added. ?He?s a strong-looking guy, too. He?s a tough guy. He?s a great fighter. He was a champ, and that was relatively easy work for you. I?m proud of you, man.?

The phone call lasted approximately two minutes. President Trump told Covington he?s a ?big fan? and he ?appreciated the shoutout tonight.? They even talked about another meeting at the White House once he becomes the welterweight champion.

Covington, who lost to current champion Kamaru Usman last year, will likely get his chance soon enough and there?s also a good chance President Trump will be watching.