Donald Trump Helicoptered Into Stadium, Then Bounced His First Pitch 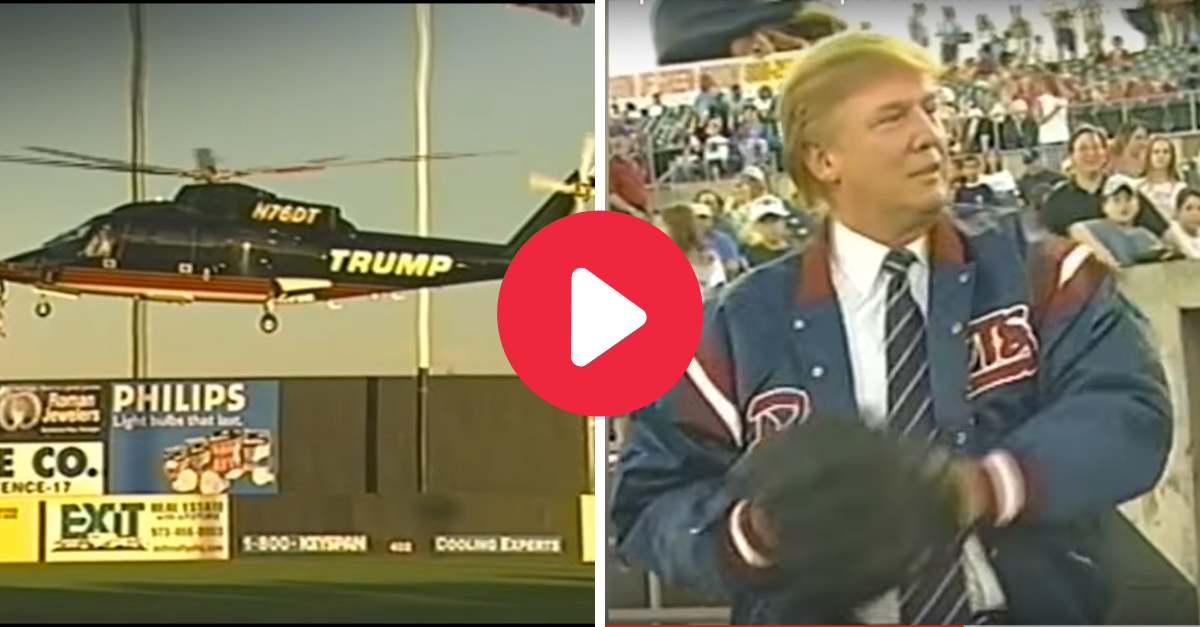 Like so many presidents before him, President Donald Trump grew up playing sports. Gerald Ford and Dwight Eisenhower both played college football, Ronald Reagan was a cheerleader and both George Bushes had a knack for slinging the baseball. Remember George W. Bush’s unforgettable 2001 World Series first pitch, which was also the first time a president did so in a Fall Classic since Jimmy Carter in 1979?

We know these days Trump still keeps his athletic prowess sharp on the golf course despite serving in the White House. But in his younger days, the 45th President of the United States was actually a pretty good baseball player. In fact, the Philadelphia Phillies and Boston Red Sox scouted Trump in his high school days, and he once told MTV he was “supposed to be a professional baseball player.” Weren’t we all?

The logical question everyone has is what does that arm look like? Considering President Trump has turned down opportunities to toss out the ceremonial first pitch at an MLB game, baseball fans and citizens across the country have been dying to know. OK, maybe not dying but at least a little curious.

To get your hands on that pivotal piece of information you’d have to travel back to 2004, when the then-58-year-old business mogul and TV star announced his presence in the most elaborate way possible at a minor league baseball game.

Donald Trump could throw out the opening day first pitch at Nationals Park, according to a report. https://t.co/QnDpKpK3aO pic.twitter.com/B7KsgGijjl

It must take some serious guts to get out on the mound in front of thousands of people. The pressure that mounts must be sky-high, and then you still have to follow up by throwing a strike (or at least not throwing like 50 Cent).

Now imagine landing your own helicopter in the middle of center field in what has to be the biggest power move ever pulled off at a minor league baseball game.

That’s exactly what Donald Trump did at a Somerset Patriots game in New Jersey on September 10, 2004. Still engaged to his future wife Melania Trump, the two literally dropped in on the game on their way to an event held by former New York Yankees manager Joe Torre.

The billionaire warmed up his arm and then took to the mound to unleash a fastball even Nolan Ryan might admire.

RELATED: President Trump Gets Boos, ?Lock Him Up? Chants at World Series

Yeah, Trump’s pitch bounced before reaching the catcher. But that arm action tells us everything we need to know about his baseball background.

Patriots Vice President of Public Relations Marc Russinoff told the Chicago Tribune that Trump didn’t balk at the idea of showing off his cannon.

“Trump ‘said not only would he be honored to throw out a first pitch, but he thought it would be fun to arrive in his helicopter and land in center field,'” Russinoff said.

Since winning the 2016 U.S. Presidential Election, Trump has yet to throw out a first pitch in a Major League Baseball game. Judging from this heater back in 2004, I think it’s time he shows off that arm on a national stage.

Why Trump Hasn’t Thrown a First Pitch as President

Donald Trump reportedly turned down an invitation to throw out the #Nationals' first pitch on opening day. https://t.co/qYn2mYjZ75 pic.twitter.com/TMytD3cdY8

Throwing out the Opening Day first pitch in Washington, D.C. is a long-held presidential tradition that began with William Howard Taft’s two-seamer to kick off a game between the Washington Nationals and Philadelphia Athletics at National Park (later known as Griffith Stadium).

That continued through the Lyndon B. Johnson and Richard Nixon eras but was paused until the Nationals returned to the nation’s capital in 2005. That’s when George W. Bush and Barack Obama picked it back up again.

Trump hasn’t thrown out a MLB first pitch yet, but he’s had the opportunity. He turned it down in 2017 because of a scheduling conflict. That was probably a smart move considering fans in D.C. booed him and chanted “lock him up” during the 2019 World Series Game 5 between the Washington Nationals and Houston Astros at Nationals Park.

Trump was offered the chance to take the mound before Game 5, but he declined. Instead, celebrity chef José Andrés threw out the first pitch. He was vocally opposed to the Trump’s handling of Hurricane Maria and Puerto Rico.

“I don’t know. They gotta dress me up in a lot of heavy armor. I’ll look too heavy. I don’t like that,” Trump told CNN about the opportunity.

Trump is no stranger to ballparks. He once sang “Take Me Out To The Ballgame” with New York Yankee fans at Yankee Stadium. He’s also thrown out the first pitch at a Boston Red Sox game at Fenway Park and a Chicago Cubs game at Wrigley Field. He’s a baseball guy through and through.

You have to wonder if and when No. 45 will finally toe the rubber again.

Because of my strong focus on the China Virus, including scheduled meetings on Vaccines, our economy and much else, I won’t be able to be in New York to throw out the opening pitch for the @Yankees on August 15th. We will make it later in the season!

Days after National Institute of Allergy and Infectious Diseases Director and White House Coronavirus Task Force leader Dr. Anthony Fauci threw out an ugly first pitch at the Washington Nationals-New York Yankees season opener on July 23, President Donald Trump canceled plans to throw out a first pitch at a Yankees game in the Bronx in August. It was a decision former New York City mayor Bill de Blasio ripped the Yankees over for welcoming Trump on the mound at all.

Trump was scheduled to throw out the first pitch on August 15, but scrapped the idea while the country tries to get a handle on the COVID-19 pandemic. It should be noted not everyone was in favor of the Yankees baseball team, including Giancarlo Stanton, Aaron Judge and Aaron Hicks, kneeling before the national anthem in the team’s opener.

“Because of my strong focus on the China Virus, including scheduled meetings on Vaccines, our economy and much else, I won?t be able to be in New York to throw out the opening pitch for the @Yankees on August 15th. We will make it later in the season!” Trump tweeted on July 26.

Trump did have time to play catch with former Yankees closer Mariano Rivera on the White House lawn, however, and spent a day on the golf course with former NFL quarterback Brett Favre. It seems the coronavirus pandemic isn’t keeping him too busy.

This post was originally published on April 13, but has been updated since.