Rory McIlroy may have slipped from the No. 1 spot on the Official World Golf Ranking after a 100-week stay on the throne, but things are still looking up for the 31-year-old Irish golfer.

McIlroy, who was born in Northern Ireland to parents Rosie McDonald and Gerry McIlroy, was coached in golf by his father from a very young age, following the blueprint of another golf phenom: Tiger Woods. McIlroy won his first golf event at the World Championship at the Doral Golf Resort & Spa, where he topped the 9-10 age group.

McIlroy was dominant on the golf scene as an amateur in Europe. He received a scholarship offer to play golf at East Tennessee State University, but after a pair of key wins in 2005, McIlroy opted to continue playing at an amateur level in Europe.

It's clear that McIlroy's upbringing played a huge role in his success as a professional golfer, so perhaps Rory will hand his own daughter a golf club from a young age.

That's a task made easier when you're married to a former PGA employee. 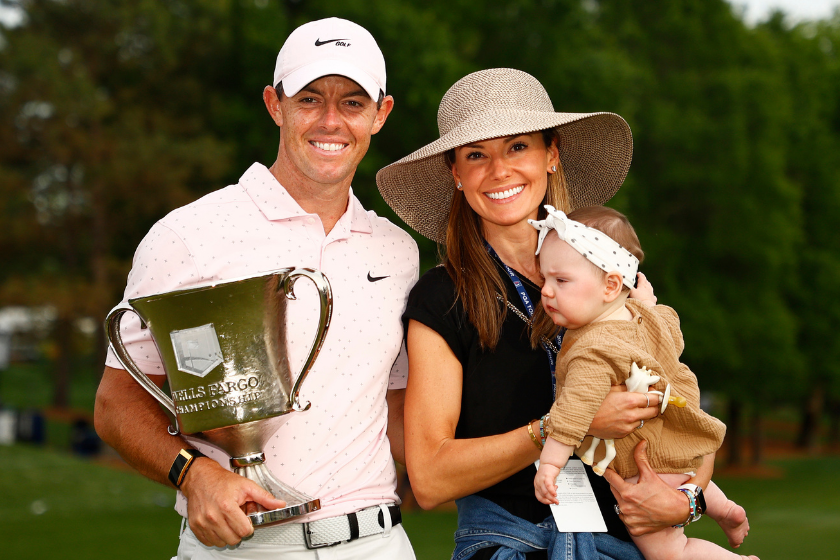 Rory McIlroy started dating Erica Stoll in 2015. Stoll is from New York and has been described as a low-key person who prefers to be out of the limelight. When Stoll met McIlroy, she was working as a PGA of America employee.

The couple first met in 2012, when Rory famously almost overslept his tee time for the Ryder Cup. Stoll was the employee sent to retrieve him and his caddie and ensure they reached the golf course in a timely fashion.

At the time McIlroy and Stoll met, McIlroy was engaged to professional tennis star Caroline Wozniacki, to whom he proposed in 2013. The couple split up just a few months later, however.

Prior to being involved with Wozniacki, McIlroy had been in a lengthy relationship with Holly Sweeney.

Stoll and McIlroy were engaged in December 2015 after Rory popped the question in Paris and officially tied the knot in April 2017 at Ashford Castle in Ireland.

The wedding was a huge one, featuring celeb guests such as Chris Martin from Coldplay and One Direction's Niall Horan. Star musicians Stevie Wonder and Ed Sheeran performed at the exquisite event.

In September 2020, some major news broke during the third round of the BMW Championship via the Golf Channel's Steve Sands, who claimed Mcilroy and Stoll were expecting a child.

Poppy, who Rory described as the "absolute love of our lives" was born at the Jupiter Medical Center in Jupiter, Florida. Rory thanked Dr. Sasha Melendy and her staff via social media for the "amazing care" they took of both Erica and Poppy.

Shortly after the birth of Poppy, McIlroy boarded a plane to East Lake in Atlanta in order to play in the Tour Championship.

Rory McIlroy turned professional in 2007 but didn't earn a PGA Tour win until the 2010 Quail Hollow Championship. That victory put him next to Tiger Woods in the golf history books as he became the only player since Woods to win their first PGA Tour event before the age of 21.

In 2011, McIlroy was on the verge of winning The Masters. A disastrous final round in Augusta saw him blow his lead and end up placing 15th. He quickly bounced back, however, winning his first major event on the tour -- the U.S. Open -- in a record-setting performance.

After winning the Honda Classic in 2012, McIlroy claimed the No. 1 ranking for the first time and moved into fourth in the FedEx Cup standings.

Throughout his career, McIlroy has gone on to win 28 professional events and 18 PGA Tour events, including major victories at the 2012 and 2014 PGA Championship, the 2014 Open Championship and the 2011 U.S. Open.

As it stands, McIlroy is still trying to reclaim his top spot on the Official World Golf Rankings, currently sitting at No. 9. He's just one spot behind Dustin Johnson, and eight places behind world No. 1 Scottie Scheffler.

Hopefully, the birth of his daughter, Poppy, will see him shoot back up the leaderboards, reclaim the top spot in the world rankings and potentially win his fifth career Major.