Rory McIlroy is one of the greatest golfers in the world, which means most of the time he can strike a ball with pinpoint accuracy.

When the four-time Major Championship-winner lined up for an approach shot at the par-4 seventh hole at Augusta National Golf Club during the first round of 2021 The Masters, he sent an errant shot toward spectators.

Of all people, it hit his father, Gerry McIlroy.

Forget a hole-in-one. Rory nearly put a hole in his dad.

Rory McIlroy hitting his dad on 7 is early candidate for shot of the tournament ? #TheMasters pic.twitter.com/QvRX2aB1UU

It was only Round 1, but it was still the shot of the tournament.

Rory immediately knew his shot was flaring to the right. He yelled out "fore!" to let fans know. His father, Gerry, was standing near a sand trap and must not have heard it.

That's when the white, dimpled golf ball struck him in the leg and probably left a welt.

Gerry was a good sport about his son drilling him. According to CBS Sports golf writer Kyle Porter, he limped away while laughing.

"I should ask for an autographed glove," McIlroy's dad said.

Was standing on No. 7 when Rory flared one out to the right and hit his dad in the leg. As he limped away, laughing, he looked over at us and said, "I should ask for an autographed glove."

Tremendous. It looks like Rory might not be in too much trouble on the car ride home.

While this moment wasn't the kind we're used to seeing at the Masters, the 2021 tournament held at Augusta National was certainly one to remember. The field included stars like Brooks Koepka, Bryson DeChambeau, Dustin Johnson and Phil Mickelson. Tiger Woods miraculously won in 2019 and Johnson took home the green jacket in 2020. At the end of the final day it was Hideki Matsuyama at the top of the leaderboard as he became the first Japanese-born professional golfer to win a men's major golf tournament.

McIlroy and his caddie will need to straighten out his shots on the golf course if he wants to win it all this year.

Who is Rory McIlory's Dad? 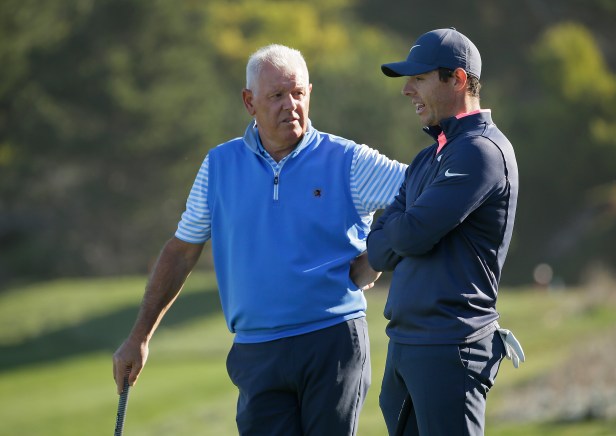 When Rory was younger, Gerry used to work two jobs to ensure his son could become a star golfer. He cleaned toilets at a rugby club in the morning and then worked at night as a bartender at Holywood Golf Club in Northern Ireland, according to Global Golf Post.

Rory McIlroy has won the PGA Championship twice (2012, 2014), the U.S. Open once (2011) and The Open Championship once (2014). He only needs a win at The Masters to complete a career grand slam. Perhaps it's time for Gerry to make another friendly wager.

If he's the one wearing the Green Jacket after the final round on Sunday, I'm sure his dad will be the first one to congratulate him. Even if he remembers his bruised leg.

This article was originally published April 8, 2021.