The last year or two have been interesting, as we've navigated COVID-19 and found our way back to "normal" when it comes to sporting events. But, among everything else, something is happening this year that we all should be excited about. Tiger Woods is returning to Augusta National. And he's looking to add another green jacket to his collection by winning The Masters for a record-tying sixth time. Arguably one of the best golfers to ever swing a club, Tiger has a rich PGA history. And his talent was evident from a young age.

After a practice round ahead of the 2022 Masters, golf legend Fred Couples was asked how the Tiger we all saw in 2019 compared to the Tiger playing right now. "Y'know, that's a great question," he said. "I personally think...I really, personally think he looks the exact same."

So as we prepare for a Woods return to Georgia, let's take a look back at his journey to get yet another shot at victory at Augusta National Golf Club. 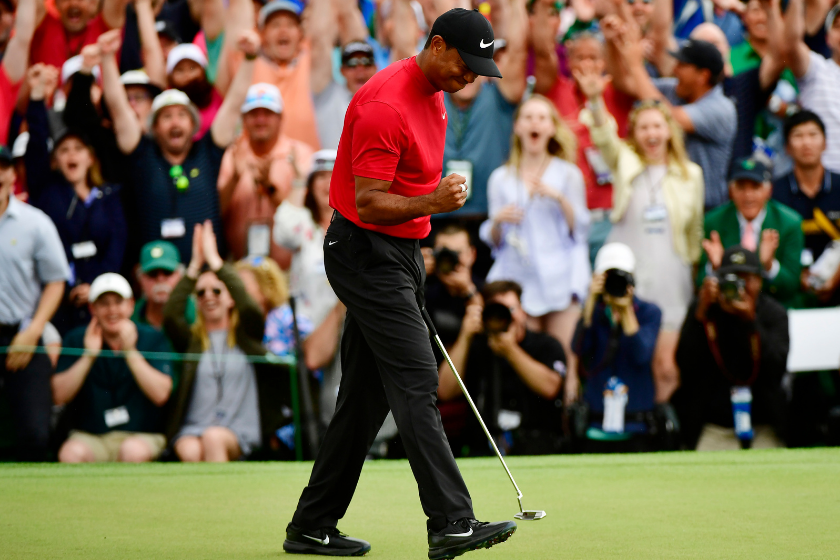 When I was 19 years old, I was working three jobs, going through a breakup and struggling to afford my $400 per month rent. When Tiger was 19, he was the only amateur to make the cut at his first major tournament. It just so happened to also be his first Masters tournament. That's absolutely wild to me. At 19, Tiger went to Augusta, Georgia, and shot 72-72-77-72. And he did that the same year as finishing PAC-10 player of the year while swinging clubs for Stanford.

A year later, he missed the cut after shooting a 75 in each of the first two rounds. But then, at 21 years old, Tiger Woods made history in a staggering number of ways. Woods donned a green jacket for the first time, set a Masters record by shooting 70-66-65-69, good for a total of 270 over 72 holes and had a 12-stroke margin of victory, and won his first major championship. He also managed to win the Jack Nicklaus Award (PGA Tour Player of the Year), the Associated Press Player of the Year, was the youngest ever Masters Champion and became the youngest to ever reach the number one world ranking.

Fast forward another four years and Tiger continued to etch his name in the record books. He won the Masters for a second time, Won the Jack Nicklaus Award for a third consecutive year, became the first golfer to win a "Tiger Slam" by holding all four major tournament championships (US Open, The Open, PGA Championship, Masters) at the same time, and became the all-time leading money winner in PGA Tour History. There are countless other insane checkpoints that he hit that year, but I'm not writing his biography. Back to the Masters. 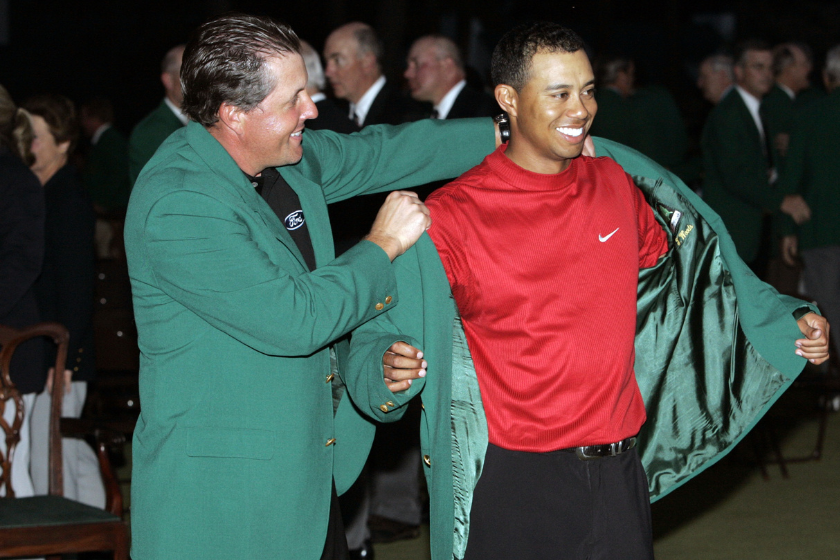 At 26, Tiger added his third Masters title. Then, at 29, he won his fourth, tying Arnold Palmer for second-most Masters titles. He also completed the career Grand Slam (all four major championships) for the second time. The year is 2005. I have just graduated high school and Tiger is already en route to being the best ever before his 30th birthday.

It would be 14 years before Woods would experience glory again at Augusta. Once he entered his 30s, Tiger's life took some weird turns. While he continued to perform on the links, and rake in plaudits, he ran into some personal issues. He got into a car crash in a domestic dispute with his then-wife, and his career was in the spotlight for the first time for something other than a golf tournament. From a golf standpoint, everything was good. But elsewhere was proving to be the beginning of an odd and hard part of Tiger's life.

He took a long hiatus in his early 30s before returning to the game and continuing to break records. That would be short-lived, as Woods then needed to go under the knife to treat a pinched nerve and he was no longer looking to be the superhuman he once was. By 39, despite returning to The Masters Tournament and finishing tied for 17th, he announced he was taking a break from the game.

Ultimately, Tiger found himself going under for four back operations, and his career seemed all but officially over in his 2017. But then he came charging back after everyone had counted him out. At 42 years old, Tiger captained the US Presidents Cup team, was selected to the US Ryder Cup Team, competed in his first major tournament since 2015, won the 2018 Tour Championship and finished second in the FedEx Cup Standings.

The following year, Tiger was back to his old ways. HIs patented red shirt was covered by his fifth green jacket, as he continued his pursuit of Jack Nicklaus for the most Masters victories. His incredible run at the Masters that year saw him finish just a single stroke ahead of Dustin Johnson, Brooks Koepka and Xander Schauffele. At 43 years old, he was the second oldest golfer to ever win the Masters behind, you guessed it, Jack Nicklaus himself.

Tiger competed with his son Charlie in the 2020 PNC Championship as he looks to help pass that major champion crown down to his children. They came in seventh, as Woods; friend and practice round partner Justin Thomas and his father Mike took home the silverware. Funny enough, that Team Thomas win might have been Tiger's fault. Jon Rahm once chided Woods for never giving him any advice on his game, instead stating that Thomas benefits the most from Wood's wealth of knowledge.

Also following his miraculous Masters win, Woods also famously played in Capital One's The Match, alongside Peyton Manning against Phil Mickelson and Tom Brady, as they raised funds for COVID-19 relief. The pandemic was, well still is, an odd time.

When You Hit Rock Bottom, You Can Only Go Up 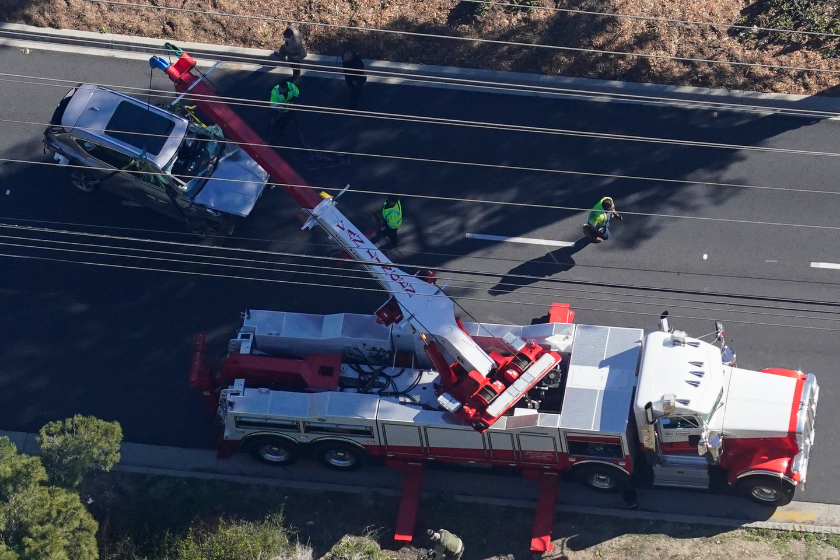 Photo by Mark J. Terrill for For The Times

Then in 2021, something awful happened. Instead of being able to beat himself out as the second-oldest Masters Champion, Tiger was in a horrific car accident. His car veered across into oncoming traffic and he shattered his ankle as well as fracturing his tibia. His right leg caused some serious issues, including a threat to his ability to walk again.

That's why it's so incredible that now, 14 months from that awful accident, we've been able to see Tiger meandering Augusta, playing practice rounds and preparing himself to have the chance to hit yet another major winning putt in the final round. The fact that he's able to play in a PGA Tour event at all is incredible, considering the back and leg injuries he's endured. Tiger should still be in Florida, resting and recuperating. But that's not how Tiger rolls and that wouldn't be a fitting way from his comeback story to begin.

The fact that he could tie and set some records, at the Masters of all places, is reminiscent of being written in a fictional Hollywood story. It seemed as though it would be a game time decision, but Tiger had his tee times set and has come out on fire.

Tiger Woods Returns to the Masters in 2022 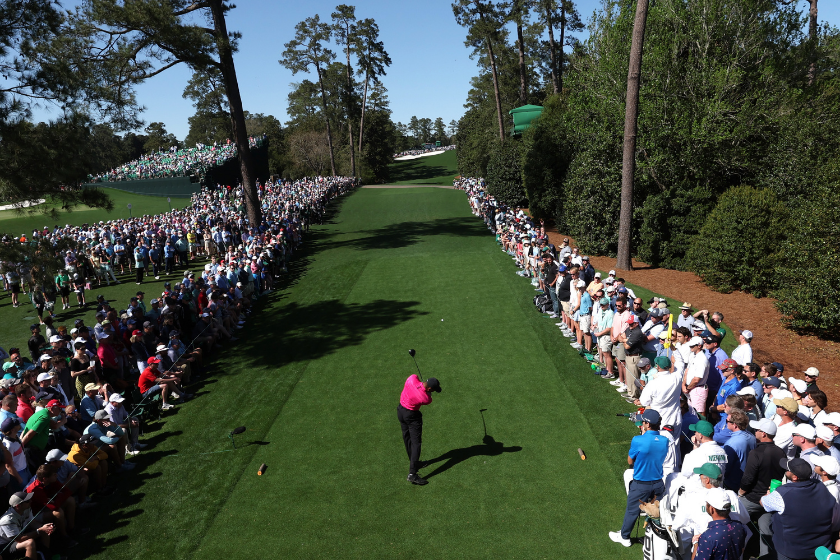 And after his first round at the Masters, Tiger Woods says there's only one thing on his mind for the evening: "Lots of ice."

There are no first round nerves showing, as Tiger has the utmost confidence in his ability to compete. Being paired with Louis Oosthuizen and Joaquin Niemann, it's almost as if the pressure was more on them than golf's GOAT. If he's able to win this thing, he'll be able to strut off the golf course with his record-tying sixth green jacket, surpassing the golden bear by a hair over a month to become the oldest ever champion, and finally passing Sam Snead for a sole grip on all-time PGA Tour victories.