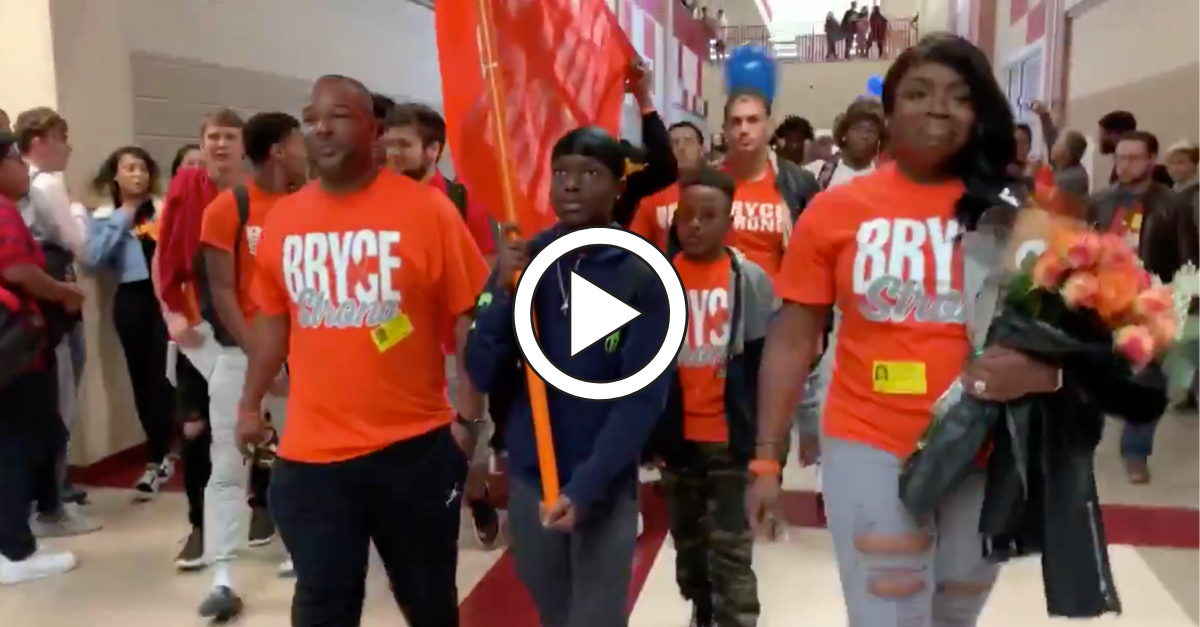 Cancer sucks. There?s no other way to put it. You, or someone you are close with, might have been affected by it in some way, and it?s awful. Sure, there are some amazing, heartwarming stories that come to light, but by no means is it all sunshine and roses. A Texas family has quickly learned that.

Back in March, junior Bryce Wisdom, a Judson High School football player was diagnosed with a Wilms? Tumor, a rare kidney cancer, according to the Mayo Clinic. The tumor is usually found in children under the age of five, but young Bryce found out as a teenager.

So Wisdom, a native of Converse, Texas, went through the battle this summer, going through 19 weeks of treatment and chemotherapy. He even rang the bell for being cancer free back in late August. Unfortunately, another tumor was found in his body in September, according to his family, and ?now the fight must begin again.?

On October 11, Wisdom left Judson once again to begin 25 weeks of chemotherapy. And as he exited the school alongside his parents, he received one of the most touching send-offs imaginable.

The school?s marching band led the way. Bryce Wisdom carried an orange flag reading ?BRYCE STRONG? while several of his peers and teammates wore t-shirts with the same message. Banners were hung in the hallways. Orange and blue balloons were flying everywhere with loud cheers for support.

The love and support from #Judson community in full force for @BryceWisdom20 last day of school. He starts 25 weeks of chemo and radiation and has been such an inspiration to everyone around him💛 @JudsonFootball @JudsonISD @dianawisdom pic.twitter.com/HAB6eJuJOE

This is love. This is what being part of a community is all about. There?s a chance not everyone knew who Bryce Wisdom was, especially considering the high school has over 3,000 students, but the Judson community was there to support him before the biggest battle of his life.

A GoFundMe account was set up by Wisdom?s mother, Diana Wisdom, to help with medical expenses. The goal was set at $7,500. At the time of this publication, the fundraiser brought in nearly $13,000.

?On March 18, 2019 Bryce found out he has cancer, Wilms Tumor. He went through 19 weeks of treatment and chemo therapy and he even rang the bell on August 23rd on his last day of chemo. Sadly on Sept 12th Bryce was told that another tumor was in his body and now the fight must begin again. This Go Fund Me has been set up for donations so that if you want to help the family you have the chance. The funds will go towards medical bills, meals and other needs for Bryce. Give if you can but the family asks for your prayers and positivity. #BryceStrong?

According to Cancer.net, approximately 500 to 600 children are diagnosed with a Wilms tumor in the United States. Bryce Wisdom is definitely one of the rare cases for it to be discovered while in high school.

As Wisdom gets ready for more cancer treatment, he will always have a special memory of how his friends responded on his last day of school for a little while.

READ MORE: Steelers RB Reveals ?I Had a Week to Live? Before Cancer Diagnosis