Some actions are absolutely off-limits in softball's book of unwritten rules. Sliding with your spikes up toward an infielder is a no-no. Throwing a bean ball at a batter's head will piss off everyone, too. Catchers throwing elbows at incoming runners is bush league as well.

Pretty much any move or play that involves intentionally injuring an opponent is completely uncalled for. The same goes for umpires, coaches and anyone else on the diamond.

If you ask me, intentionally beaning the blue behind the plate is as bush league as it gets.

Look, I get it. Bad umpires exist. They miss calls. We tell them they're blind. That's how the world works.

But what took place between the Minors Gold and California Cruisers Mel Sievers softball teams in West Covina, California, brought shame to the sport.

The girl in the circle is Cruisers pitcher Hailey Hilburn, according to Larry Brown Sports. Hilburn played for Canyon High School at the time and played college softball at Utah.

Hilburn and her coaches were clearly upset at a ball four call on a pitch that looked down the middle and walked in a run. Fans rain down insults on the umpire and that's when the coach (allegedly Sievers) walks from the dugout to the infield to calm down his pitcher (or so we think).

After the timeout, the very next pitch from Hilburn drills the home plate umpire in the facemask. The catcher made no attempt to catch the ball, even jumping away from the pitch entirely to make it very clear what was going on.

Here's the exact moment it happens: 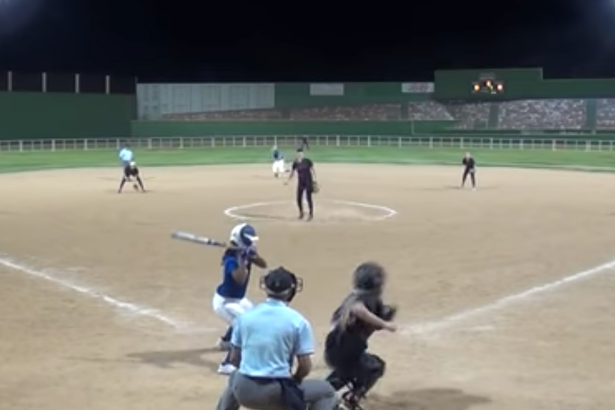 The game is immediately called and the coach, pitcher, and catcher are all ejected.

I don't care how terrible a strike zone that ump had or if he robbed the team on multiple bad calls throughout the game, you just don't do that. It's horrendous sportsmanship. If that coach really did tell his pitcher to hit the umpire with a fastball on purpose, he shouldn't ever coach again. Period.

Ejections were necessary, obviously. That's not how we want our children behaving, is it? And you know what, umpiring isn't easy. The crap these officials have to deal with is already enough. To wear a heater off the dome is too far.