Softball isn't a traditionally dirty sport, at least not in the way that football (even at the pee wee level) can be. Still, that doesn't mean pitchers don't intentionally hit umpires and catchers don't level back-to-back runners.

Sometimes, it's hard to tell if a play is malicious. Encounters at second base on steals and collisions at home often fall in that gray area. Even kicking another player who's in the way can be a tough call.

Ejections happen all the time in this sport. Arguing balls and strikes will get you tossed. Sliding spikes up into a base might, too.

Somehow, this softball runner was able to avoid penalty from the home plate umpire.

As she rounded third on a base hit, the female catcher caught the throw from the outfield just before the runner reached her. Instead of attempting to go around the catcher, she just jumped and kneed her in the chest.

The catcher didn't hang on to the ball and the runner was ruled safe. Apparently, it was all legal.

My opinion is ad follows: This would've been dirty had the throw been right to the plate where the catcher originally stood. Since it took her a few steps into the base path across the batter's box, the runner had little time to do anything but run her over.

Look where she starts: Look where she ends up: 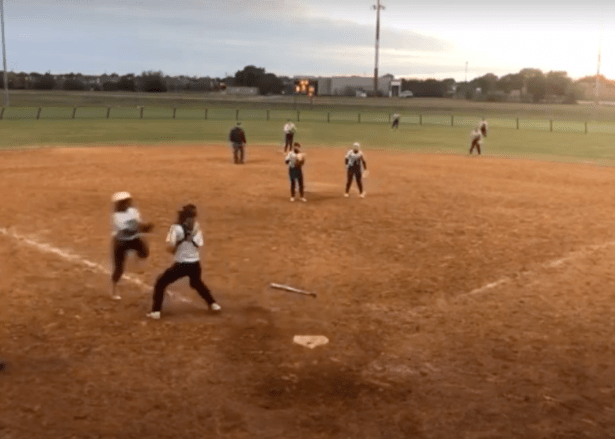 Was the jump kick necessary? No, it looked a whole lot like Antonio Brown karate kicking a punter.

Did she do it with the intent to hurt the girl? I sure hope not. Still, I bet her coaches and parents probably gave her some words of wisdom after that play.

In the same way that a train isn't liable for what stumbles on the tracks, this baserunner isn't at fault here.

What do you guys think?