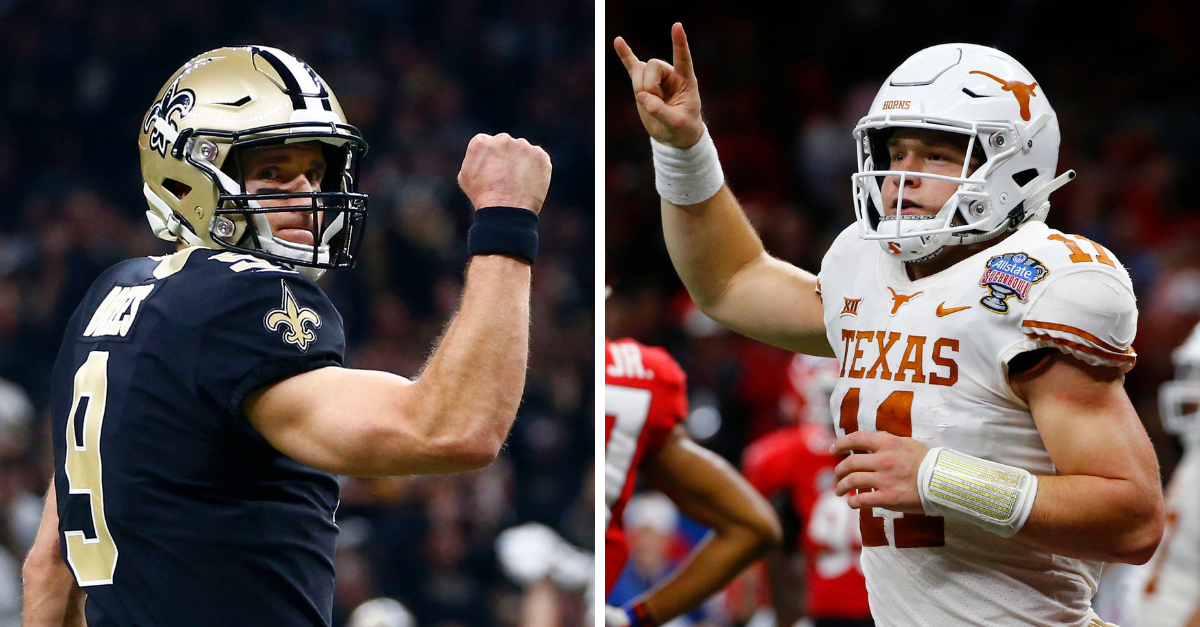 The second-largest state in the U.S. holds domain over 268,597 square miles of land as more than 28 million people call Texas home. It’s no surprise that massively famous athletes like “Mean” Joe Greene (Temple) and Shaquille O’Neal (San Antonio) found their game in the Lone Star State. These two definitely help back up the saying: “Everything’s bigger in Texas.”

The same can be said for two of the biggest alumni to come out of Westlake High School in Austin. New Orleans Saints quarterback Drew Brees and Texas Longhorns quarterback Sam Ehlinger are larger-than-life in the communities where they play, and their shared past in Austin has blossomed into a mutual respect that grows stronger with every touchdown they rack up.

When Ehlinger’s Texas Longhorns traveled to face the Georgia Bulldogs at the 2019 Allstate Sugar Bowl, which was held in Brees’ home arena inside the Mercedes-Benz Superdome, the future NFL Hall of Fame quarterback reached out to his fellow Westlake alum to wish him good luck.

“I have pride in the fact that I went to his high school,” Ehlinger said prior to the Sugar Bowl. “And to be able to play in the Superdome where he’s absolutely gone off and set records and done those things for the Saints organization. It’s really, really cool.”

Before taking on Georgia, Ehlinger honored another Westlake graduate by wearing Brees’ high school jersey during the pregame, and the Saints superstar definitely noticed.

“It was awesome. He was rocking the jersey walking into the stadium. I thought that was cool,” Brees said. “He said he was trying to get some of that mojo.”

Drew Brees is the NFL’s all-time leader in passing yards, but the MVP of Super Bowl XLIV was winning titles and setting records long before his pro career. During his time at Westlake High School, Brees led his team to a 28-0-1 record in two seasons as their starter, which included the Texas 5A State Championship during his senior season in 1996. It’s still the only state football title in Chaparrals history.

Throughout the years, he’s kept a close eye on Ehlinger’s rise to stardom in Austin, Texas.

“I felt like I’ve seen him grow up a little bit. Knowing him ever since middle school, high school, and some of his goals and aspirations. You know, I think he’s always envisioned himself being in that position playing for the University of Texas, the hometown team and leading them at quarterback. He’s done a phenomenal job of that in his first two years.”

A state title avoided Sam Ehlinger during his time as a three-year starter for Westlake, but the accolades did not. Ehlinger set school records for passing yards (7,491), passing touchdowns (89), total yards (9,886), and finished his career with 125 total touchdowns, as well as earning numerous state and national honors.

After rocking Brees’ Westlake jersey, Ehlinger completed 19 of 27 passes, racked up 233 total yards and scored three rushing touchdowns in his team’s Sugar Bowl win that helped return the Texas football program back to the top under head coach Tom Herman.

“He’s a stud. He’s a tough guy,” Brees said of Ehlinger. “[The Sugar Bowl] was fun to watch. Man, he played big, his team played great. His future is very bright.”

Brees is the precision pocket passer, and Ehlinger is the bruising dual-threat quarterback, but both are Westlake, Texas-bred winners. There must be something in the water because Westlake churns out star quarterbacks that just know how to win.

Just in case you need any more validation into the quarterback lineage at Westlake, Super Bowl LII Most Valuable Player Nick Foles is also 2007 graduate.

READ MORE: The Reason Why the Saints Lost Has Nothing to Do With Pass Interference