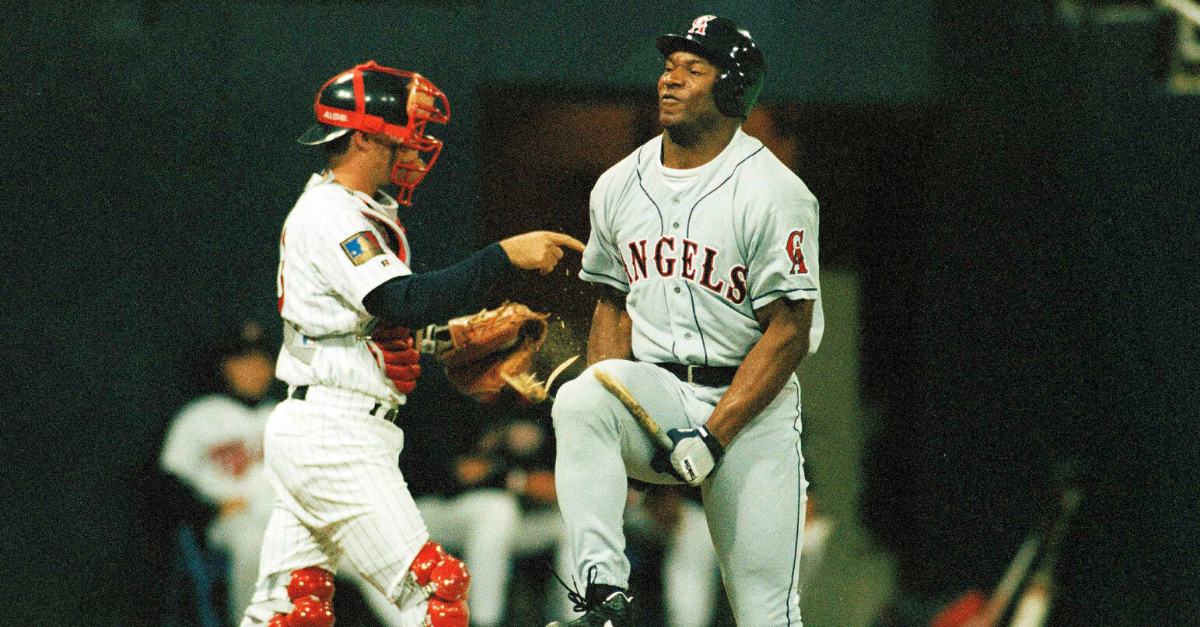 Bo Jackson is one of the strongest athletes to ever walk the earth. He trucked opposing defenders while playing running back at the University of Auburn en route to winning the 1985 Heisman Trophy award. However, it wasn’t until the former NFL and Oakland Raiders halfback made his transition to Major League Baseball that MLB fans witnessed firsthand Jackson’s Hulk-like abilities.

Jackson once lined a ball so hard while with the Kansas City Royals that he turned Texas Rangers and MLB Hall-of-Fame pitcher Nolan Ryan into an blood-oozing mess. Don’t worry, Ryan was fine and finished the game.

Behind eye-popping muscles that would’ve rivaled those of the Steroid Era, Jackson slugged 141 home runs in eight MLB seasons with the Royals, Chicago White Sox and California Angels and even made an All-Star team.

Don’t be fooled, though. The true test of baseball player’s strength isn’t crushing baseballs into the upper deck of the Kingdome like the one Mark McGwire once hit off of Randy Johnson.

No, it is the ability to break a wooden bat over one’s knee or, better yet, head. Bo Jackson mastered both of those bat-breaking skills and probably had to remove a few splinters from his skin during the course of his career.

Bo Knows how to break bats. The two-sport star made these wooden clubs look like toothpicks.

Jackson created an unforgettable image back on June 21, 1989, when he snapped his bat over his helmet after a grounding out in an at-bat against Milwaukee Brewers pitcher Jay Aldrich.

Hitting cleanup, Jackson was jammed and softly bounced the pitch back to the pitcher for the easy out in the sixth inning. Jackson slowly made his way to first before heading for the Royals dugout, but not before cracking his bat in half over his head and handing the pieces to a Royals coach.

Fans at the ballpark and those watching from home couldn’t believe what they saw.

Jackson made a habit of snapping his baseball bats…

Bo Jackson was creative in his bat-snapping techniques. Why stop at breaking it over his head when he had the world’s most massive legs?

On April 6, 1994, another bat fell victim to Jackson’s strength. While playing for the California Angels in his final MLB season, the 31-year-old outfielder struck out on three straight pitches in the fourth inning against Minnesota Twins pitcher Jim Deshaeis in the Metrodome.

Almost immediately after the strikeout, Jackson raised his stick in the air and shattered it in two. You have to truly feel bad for that bat.

According to TMZ, that broken bat would later sell at an auction for $20,000 to someone looking to own a piece of history from the greatest athlete ever. It also inspired a Bo Jackson bat-breaking bobblehead.

Just a year prior, Jackson snapped another bat in half.

On Aug. 9, 1993 as a member of the White Sox, he struck out swinging against Oakland Athletics pitcher Bobby Witt in the bottom of the fifth inning. Yet again, the bat’s life was cut short by the freak athlete.

Jackson wasn’t the first to break a bat over his knee, but like so many other things he did, he made it popular.

Bo Jackson breaks a bat over his leg after a strike out, 1980s pic.twitter.com/i5gRohOa1R

But Bo Jackson’s displays of strength were different. He accomplished a lot of awesome things on the baseball field — hitting three home runs in a game against the New York Yankees and scaling the outfield wall like Spider Man — but nothing compares to his legendary bat breaks.