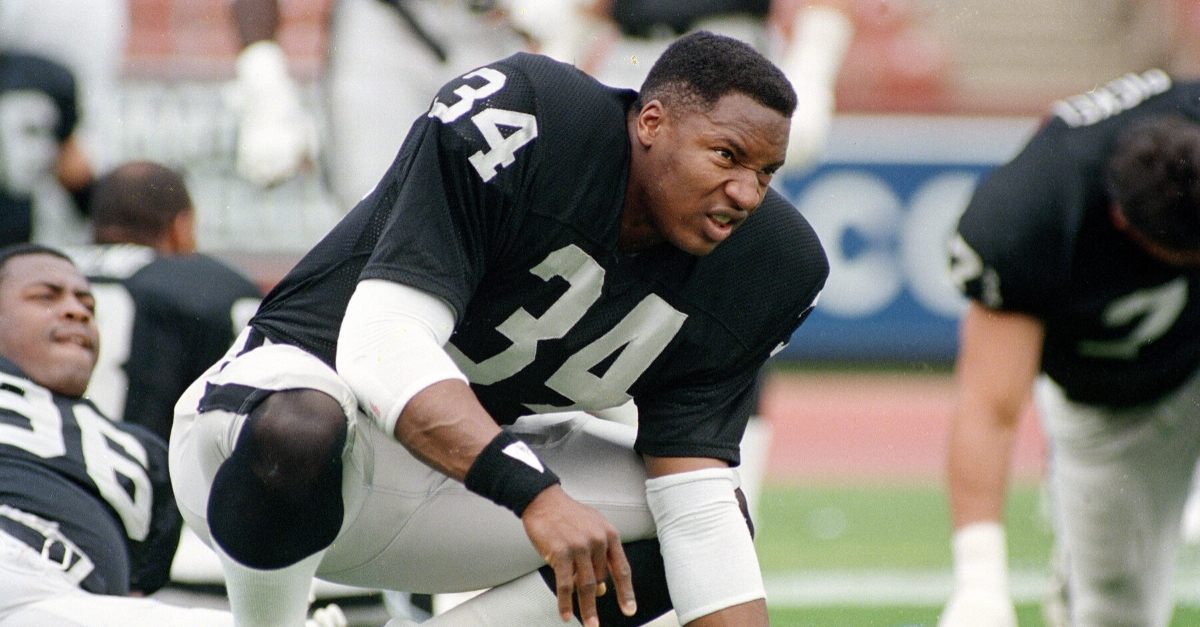 One of the biggest “what-if” stories in sports history is all about Bo Jackson and the hip injury that ended his career.

During his fourth season as a running back in the National Football League, Jackson was injured in a game against the Cincinnati Bengals after being dragged down from behind. The injury ended his football career and eventually his baseball career as well, cutting short his legacy as the greatest two-sport athlete in American history. But if Jackson wasn’t hurt, how untouchable would his career have been?

From Bessemer, Alabama, Jackson played four college football seasons at Auburn University and won the 1985 Heisman Trophy. Jackson was taken with the first pick of the first round in the 1986 NFL Draft by the Tampa Bay Buccaneers, but because of an incident involving the Bucs’ owner, the multi-sport star refused to play for the franchise who he believed tried to sabotage his college baseball career.

Instead of playing football, Jackson signed with the Kansas City Royals after being drafted by an MLB team for the third time. He would continue to play Major League Baseball for the next six seasons.

The Los Angeles Raiders would select Jackson in the 1987 NFL Draft in the seventh round. During his first three seasons, Jackson played in 28 games for the Raiders, splitting time between baseball and football. During those seasons, he rushed for 2,084 yards and 11 touchdowns while averaging 5.3 yards per carry.

In 1990, Jackson was having a great season, racking up 698 yards and five touchdowns in 10 games. In a playoff game against the Bengals, he rushed for 77 yards on six carries before one run changed everything.

Jackson was pulled down from behind while running down the right sideline. Jackson later said that he had a dislocated hip, which popped it back into place after he rolled over. This damaged the blood supply in the hip joint area, and he was diagnosed with avascular necrosis. (This was the same injury Alabama’s Tua Tagovailoa suffered during the 2019 season.)

Even though Bo Jackson continued to play baseball until 1994, his athletic career was basically destroyed do to his hip injury. But if he isn’t injured in that playoff game, what would have happened to Jackson’s career?

What If Bo Jackson Wasn’t Injured?

In his only selection to the MLB All Star game, Jackson launched a 448-foot, leadoff home run and was named MVP of that game in 1989. The next year, Jackson made the NFL Pro Bowl.

There is no doubt that the freak of nature that Jackson was as a football player and baseball player would have gone on to great careers in both sports, possibly ending with enshrinement in both the Pro Football Hall of Fame and Baseball Hall of Fame.

If Jackson was able to play in 120 NFL games in his career, (thinking he played for 12 seasons and 10 games in each of those) he could have easily finished in the top 40 for all-time rushing yards in NFL history. In his four professional seasons, Jackson averaged 73.2 yards per game. Over the course of a 12-year career at 10 games per season, that put Jackson on pace for 8,760 career rushing yards.

At that yardage mark, he would’ve passed names like Larry Csonka, Herschel Walker and Jim Taylor to finish 39th all-time. There is also a good chance he has a few seasons during his prime where he runs for more yards per game and ends up over 10,000 yards for his career.

But it wasn’t just his football career that was derailed by Jackson’s injury. Even though he did play baseball after hurting his hip, his career was never the same. In 1991, Jackson was released by the Royals and signed by the Chicago White Sox. He’d played 23 games that season before taking the 1992 season off to recover.

When he returned in 1993, Jackson was mourning the death of his mother. In his first at-bat, Jackson homered off Neal Heaton and received a standing ovation. He was named AL Comeback Player of the Year in 1993.

On this date in 1993, Bo Jackson returned to baseball with authority. pic.twitter.com/UUOGKjhRne

After a second season with the White Sox, Jackson signed with the California Angels before retiring.

During his eight-year baseball career, Jackson hit 141 home runs with a .250 batting average. That may not seem like a ton of home runs, but just think about the fact that he only played in 183 games after turning 28.

Jackson averaged 16.9 at-bats per home run. Alex Rodriguez, who is fourth all-time in home runs, hit a home run every 15.1 at-bats. Also, Jackson earns a ton of credit as a fielder, covering tons of ground in the outfield and having a cannon of an arm throwing home.

He may not have finished his pro career in either sport as the best player at his position, but he would be one best of his era and his stats would have shown any way you dice it. From Nike transcendent “Bo Knows” campaign to Jackson’s eye-opening athleticism, there’s a chance the Alabama native’s professional career, and the years he left on the table, would’ve made him undoubtedly the greatest athlete to ever live.