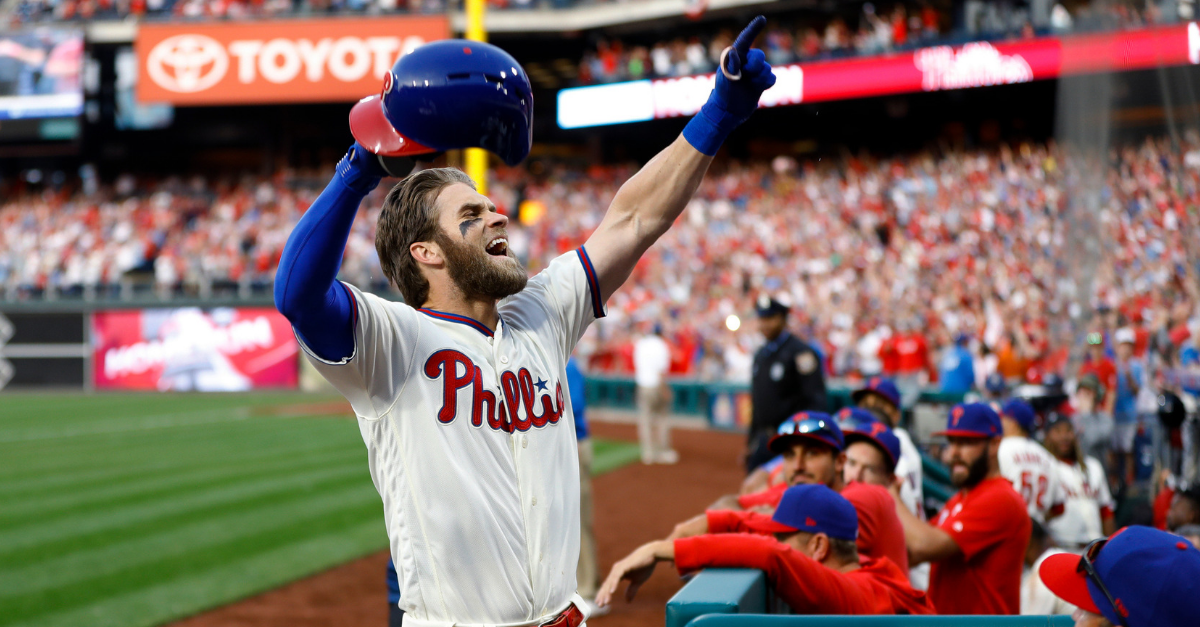 Bryce Harper is one of the biggest superstars in Major League Baseball. Philadelphia is ?The City of Brotherly Love.? Add those two things together and you have the most perfect start to a marriage a sports team could ever ask for.

Ever since the 26-year-old Harper signed a mega deal with the Philadelphia Phillies, one that pays more than some really important jobs, the city has welcomed him with open arms. The team being 3-0 and the MLB All-Star outfielder already belting two home runs against the Atlanta Braves on opening weekend doesn?t hurt, either.

Then, on April Fools Day, Bryce Harper and his wife Kayla announced they are expecting the birth of their first child, a baby boy, this summer. It wasn?t a joke, either. They even have a Phillies jacket ready for Citizens Bank Park.

?Philly raised little man will be!? Harper wrote on Instagram.

So now, the $330 million dollar question is what will the couple name their son?

Thankfully, NBC Sports Philadelphia helped us all out by going to the street and asking the locals what the famous new couple should name their kid. Needless to say, it doesn?t disappoint and you should prepare to laugh.

Of the 13 people the reporter asked, which ironically matches Harper?s 13-year contract, here is the breakdown of answers:

? Rocky received the most votes with three because, you know, Rocky Balboa is a Philly icon and you know that baby would be tough as nails with a name like that.

? Chase got two votes because Chase is a cool name and Philly fans loved them some Chase Utley for years after he helped win the Phillies the 2008 World Series.

? Harry picked up a vote because the late Harry Kalas is a Phillies legend and naming your child after the broadcaster would definitely win the city over even more.

? Benjamin gained a vote because Bryce Harper?s kid will obviously be right in lines with the one and only Benjamin Franklin. It?s the most American one yet. The announcement photo on social media with the Phillies star was even taken at the Benjamin Franklin Bridge.

? Rhys collected a vote because one Rhys in Philly is not enough. Rhys Hoskins needs a Bash Brother, for sure.

? Love banked a vote because today?s baby names are crazy and the city?s nickname is rather perfect considering he will be raised there.

? Bryce Jr. was the first vote and likely the most logical one. Keeping the family legacy is important and if the start to the 2019 MLB season is any indication of the future, the city will protect him at all costs after his dad left the Washington Nationals.

There you have it. Rocky wins. As always. Next.

READ MORE: MLB Vet Smashed a Clubhouse TV Because He Hates Fortnite Like Most Parents