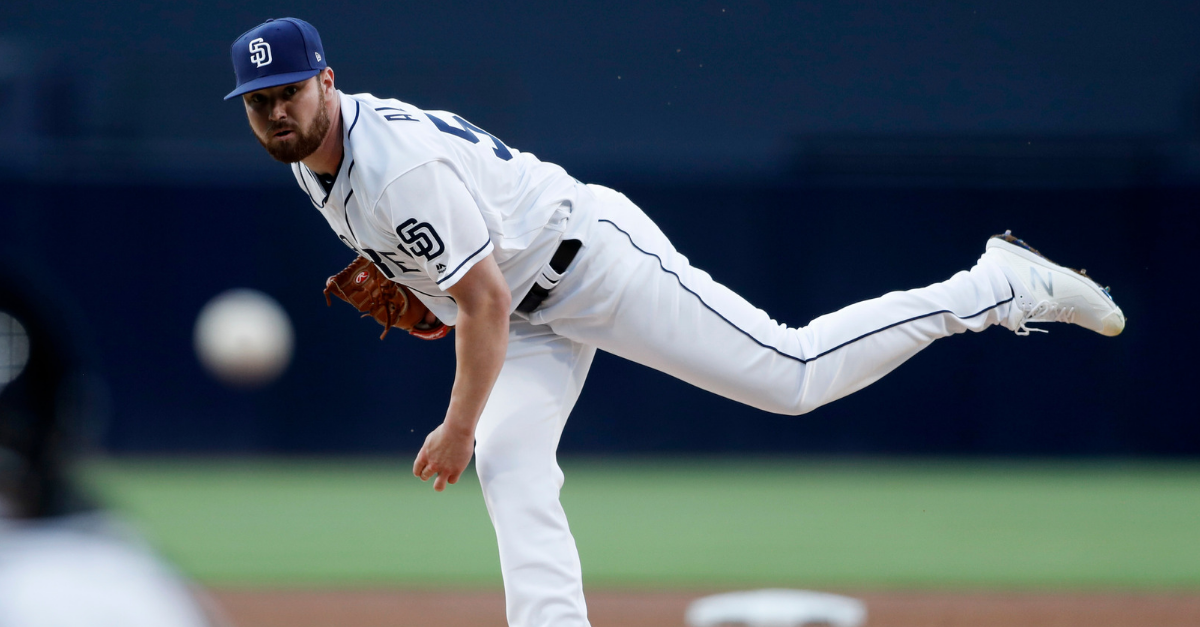 Remember that movie when a young prospect randomly meets a superstar athlete at a steakhouse one time, and a bet was made that the kid would never make the professional ranks? Then do you remember the kid defying the odds and having a debut for the ages? Well, that movie doesn’t actually exist, but it just happened in real life.

It’s time for the world to meet San Diego Padres pitcher Logan Allen, a left-handed flamethrower with an incredible story that rivals any sports flick made in Hollywood. It’s one that involves WWE superstar John Cena and it absolutely needs to be told.

One night down in Tampa, Florida, Cena and his buddies were eating at one of his favorite restaurants when one friend spotted who he thought was a group of baseball players. On the surface, it looked like the young prospects were getting taken advantage of, according to Cena, but it was far from that. They were actually cool sports agents and what happened next is truly something special.

As Cena and his two friends wrapped up dinner around 9 p.m. that night, Padres prospect Logan Allen stopped by the table to say hello. The two walked out of the steakhouse about 4 a.m., but not before a bet was made.

You see, Cena noticed Allen had “very rarely faced failure” and wanted to challenge the young prospect to continue to chase his dreams. So the wrestler bet him $1 that he wouldn’t make it up to Major League Baseball, shook his hands, exchanged contact information, and asked Allen to hold him to the one dollar bet.

Then, on Tuesday night at Petco Park in California, Allen’s dream of playing in the big leagues became reality.

Tonight, @Logan__Allen earns his dollar from @JohnCena as he makes his Major League debut.

Allen, a 22-year-old from West Palm Beach, Florida, made his MLB debut against the Milwaukee Brewers and made it look so easy. He pitched seven scoreless innings, allowing just three hits and two walks, and recorded five strikeouts in 90 pitches.

Lights out would be an understatement. He made a good MLB team look like they were still in Triple-A in the Minor Leagues.

Unbelievable night. One I truly will not forget. Thank you to everyone that reached out. @JohnCena you owe me a 💵. Let’s Go Padres!

“Unbelievable night. One I truly will not forget. Thank you to everyone that reached out. John Cena you owe me a [dollar]. Let’s go Padres!

What made the Major League debut even sweeter is Logan Allen also recorded a hit and scored a run.

What made the night even more special is his family was on hand to watch the incredible pitching performance.

What brought it all full circle was WWE star John Cena, wearing Logan Allen’s No. 54 jersey, on hand at the game and gave him a big hug.

An incredible story of friendship, determination and trust all comes to this.

Handshake and a BIIIIG hug from @JohnCena! 🤝🤗 pic.twitter.com/yiwmSEqEqy

With the bet, John Cena played the averages. Then Logan Allen proved him wrong.

The only thing left, as part of the terms, is for the professional wrestler to deliver the dollar bill to Allen on the mound at a game.

We see you @JohnCena! 👀@Logan__Allen’s biggest fan made it to @PetcoPark for his #Padres debut! pic.twitter.com/4kiQXVrozh

Judging by Logan Allen’s debut, this is the one dollar bet John Cena couldn’t be more proud of losing, and at a Tampa steakhouse of all places.