The NBA Draft is the official coming-out party for the newest crop of potential hardwood superstars. The pomp, the circumstance, the "Adam Silver Looks like a Vampire" Jokes on Twitter, it's a magical night. And much like other magical nights throughout the human experience, like weddings, Bar/Bat Mitzahs, Quinceañeras and funerals, if you show up looking like a mess, people are going to question your seriousness.

If you show up to the NBA Draft looking like a 75 cents and not a million bucks, you're telling the world a little something about yourself. That's true in 2022 and it will be true in the future drafts to come. When you show up to the Draft Day Red Carpet, you need to look like an ESPN highlight reel. You cannot make a second first impression, which is why we're taking the time to dissect the best and worst outfits we saw at the Barclays Center in Brooklyn from the top draft picks of the 2022 NBA Draft.

The Best Dressed of the 2022 NBA Draft 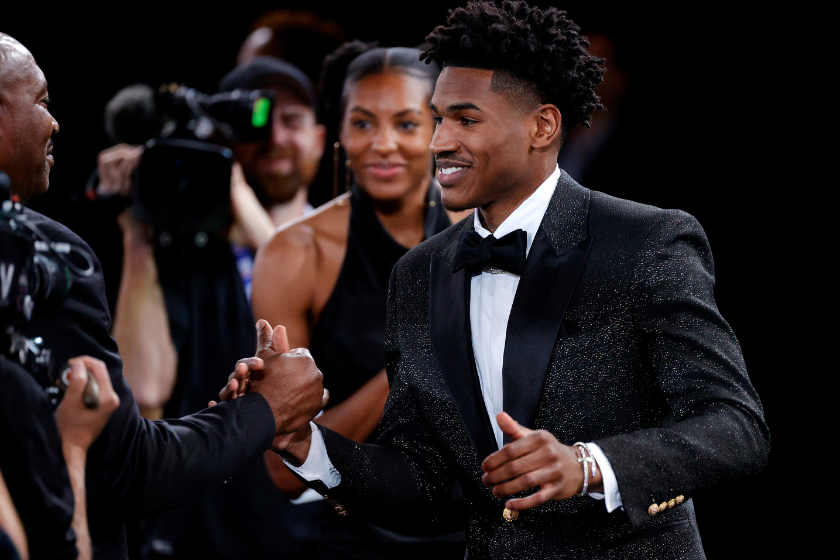 Ochai Agbaji, No. 14 Pick, Cleveland Cavaliers: This is sharp. From afar Agbaji's tux looks simple. Clean lines, nothing fancy, silk labels, all the trappings of a well-put-together outfit. However, once you get closer, the details pop out. The shimmer in the jacket is understated, much like Agbaji's playing style. He's quiet until he strikes. This is the perfect fashion statement for a player who is looking to wear their resume on their sleeve. Ochai Agbaji is a little flashy, but when you really look closely he sparkles. Also, shoutout to Agbaji's bowtie. 10/10, no notes. 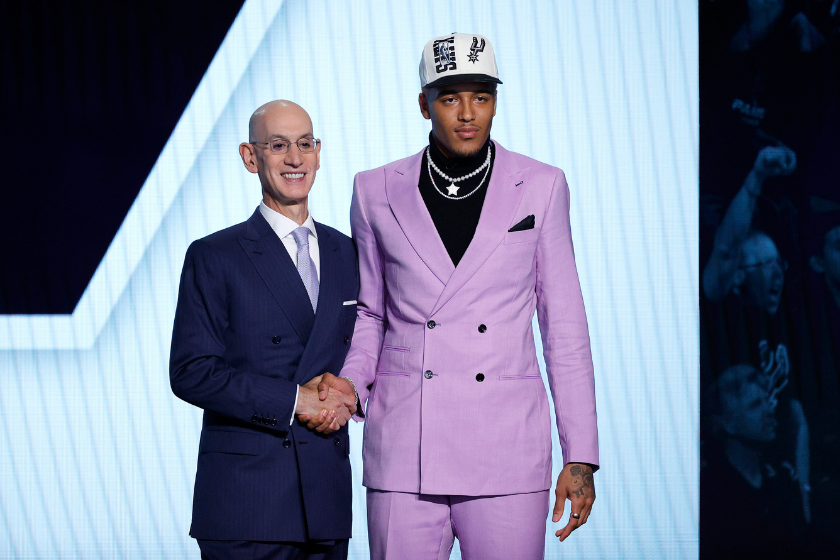 Jeremy Sochan, No. 9 Pick, San Antonio Spurs: Jeremy Sochan didn't have to give you lavender, but he did and we should all be thankful. This look is so incredibly well done that you don't even notice the suit is double-breasted. Sochan lets the color do everything for him. As someone who is known for his loud hair colors, Sochan brings the quiet power of a light purple to the NBA Draft. This is a look that we should all have in our wardrobes, Kings. Lavender is life. 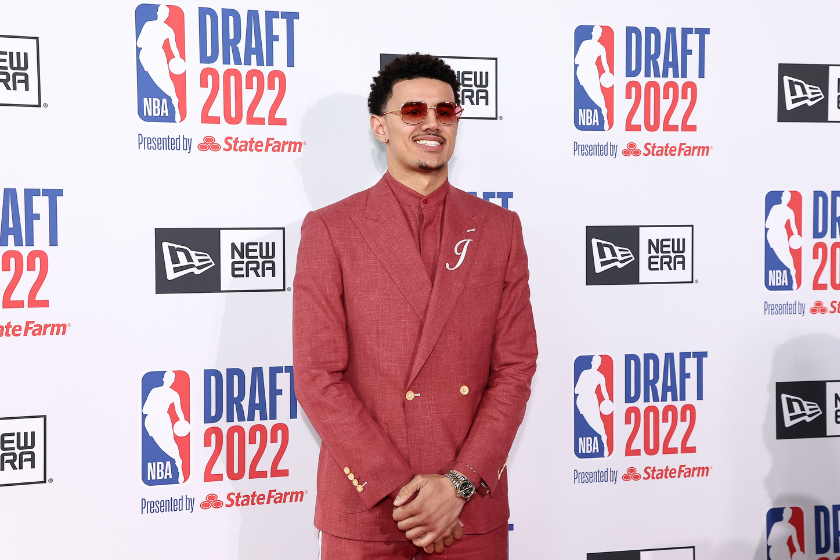 Johnny Davis, No. 10 Pick, Washington Wizards: We saw a ton of jewelry and accent pieces in this draft, but Johnny Davis took the time to mesh the lapel pin and the chain into one statement piece. The simple "J" on his lapel is clutch, but the entire look is buckets. The texture of this "not quite red, but not quite salmon" suit is what makes it work for me. There's a lightness to it, that really brings a laidback confident feel to Davis' draft night. But the icing on the cake is the matching shirt, made from the same fabric as the suit, and with a subtle and elegant band collar. It's also a subtle nod to his Alma Mater, Wisconsin. This look is STUNNING. 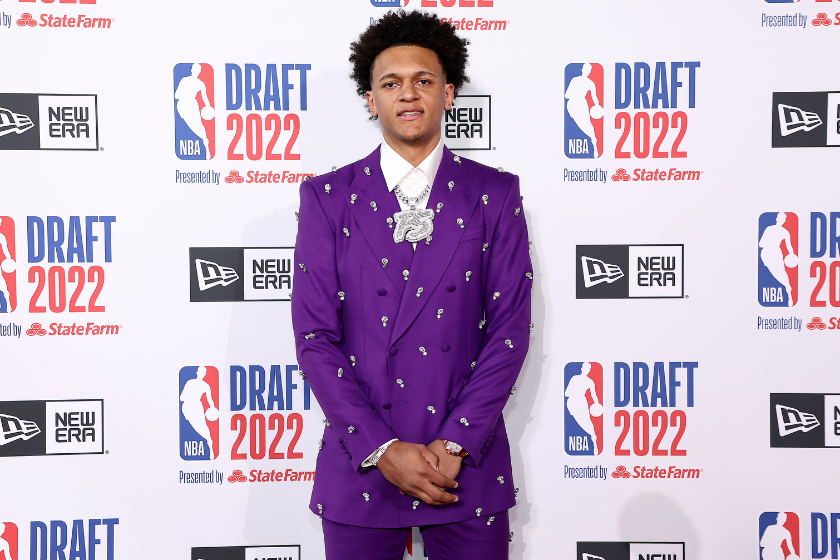 Paolo Banchero, No. 1 Pick, Orlando Magic: If you were confused as to why Paolo Banchero opted for Purple on Draft Night 2022, you probably didn't know who his parents were. Both of Paolo's parents played at the University of Washington, and many of his fellow Seattle residents hounded him for not choosing to play for the Huskies, instead opting to join Coach K and the Blue Devils. "I wore this color cause everyone gave my parents some heat for me not going to UW where they went so this was like a 'I"m sorry," Banchero told the press before the draft. He could have gone with a Duke Blue for the night, but that would have put Duke teammate Mark Williams in a tough spot.

And while some thought that Auburn star Jabari Smith Jr. would go No. 1 overall, Paolo decided to flip all of the mock drafts on their heads. And it began with this look.

And let's just say, the Duke star wore the hell out of it. This suit is 100% the right call and it hits all the right notes. Sure, the purple suit is giving off a bit of a Prince vibe. But that's just how royalty works. This suit, with the rhinestones adding to the noise, paired with a simple white shirt, and the "P5" Chain is perfect. New York is known for the bright lights of Broadway and the first overall pick's look rivals those in Times Square. This is suit is top-notch. But, unfortunately, Paolo didn't find himself in the No. 1 spot all night... 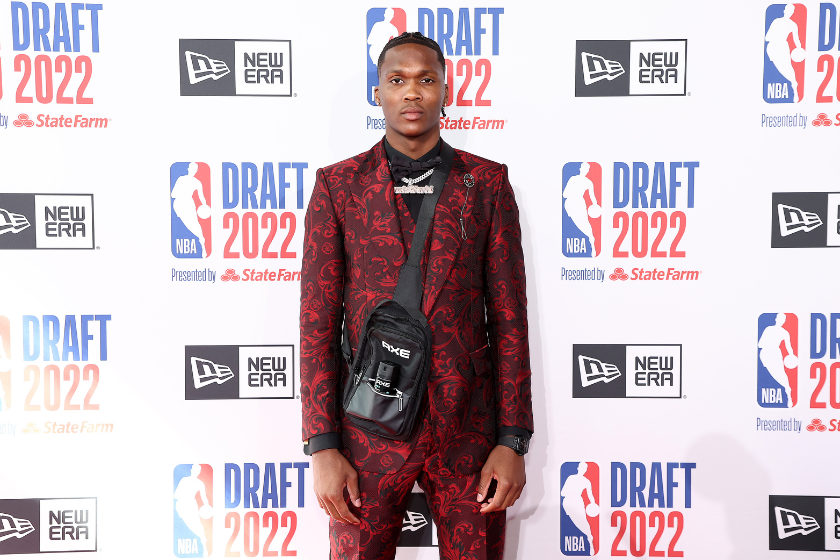 RELATED: Don't Sleep on Bennedict Mathurin in the 2022 NBA Draft

Bennedict Mathurin, No. 6 Pick, Indiana Pacers: All day with this look. This is perfection from the Montreal-born baller who will suit up for the Indiana Pacers in 2022. This entire look is both incredibly loud and soft at the same time. It's got texture and and subtlety all rolled into one look. It's not black and red like we've seen in years past from Jalen Rose and others, it's the improved-upon update. The Arizona hoops star absolutely CRUSHES THIS LOOK. Paolo Banchero may have gone first overall, but this suit is the winner of the draft, hands down.

The Worst Dressed of the 2022 NBA Draft 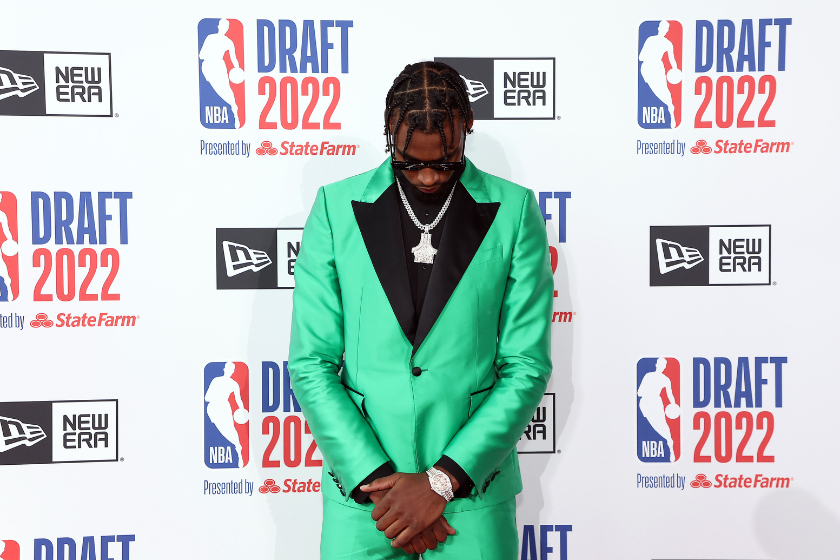 Tari Eason, No. 17 Pick, Houston Rockets: I want to be upfront with all of you and that's why Tari Eason's green suit is the first on this list. I don't know how to feel about this look. One one hand, it's a lot. There's no subtlety here. Just pure unadulterated color. You gotta tip your hat to it, because it's a bold look. However, on the other hand, I have no idea what's going on here. It's chaotic, it's bright, it's nuclear, the LAPELS. There's just a lot going on here. If someone can tell me how to feel about this look, I'd great appreciate it, because I am... shook. 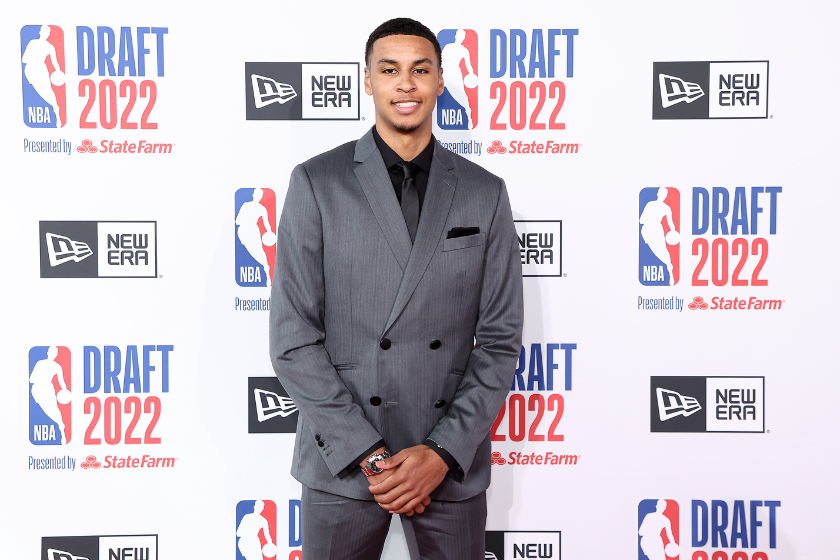 Keegan Murray, No. 4 Pick, Sacramento Kings: This look is FINE and that's why it's on this list. We've seen the double-breasted look both in 2022 and years prior, but this just feels like Keegan Murray was playing it safe. Keegan, it's draft night. You have to go all out. And as punishment, you now have to play for the Sacramento Kings. 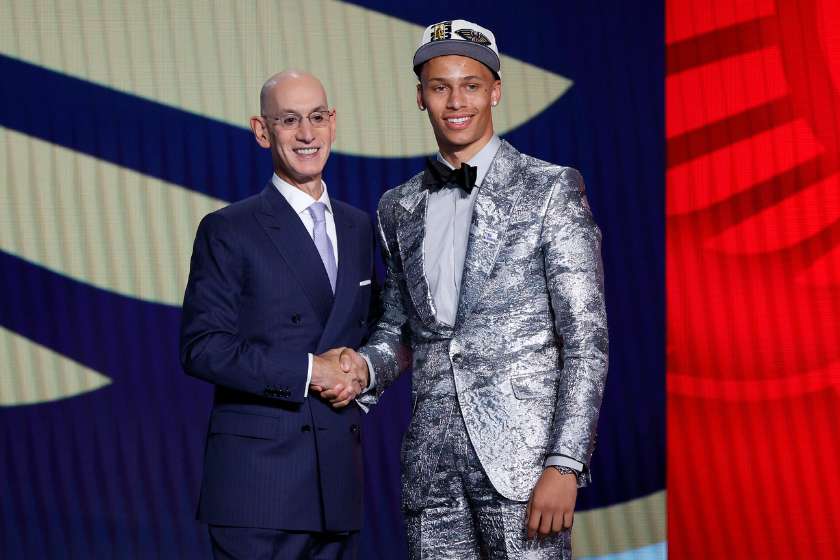 Dyson Daniels, No. 8 Pick, New Orleans Pelicans: The jury is still out on whether or not Shai Gilgeous-Alexander's shimmery silk suit from 2018 is the brightest look in recnt memory, but this look from Dyson Daniels leaves no room for discussion. This is a lot. The lining has two tributes to his hometown and to his family, but besides that, this suit is Tin-Man meets Stanley Tucci in "The Hunger Games". It's a lot. Malaki Branham, who was drafted by the Spurs, had a similar vibe in regards to his jacket, but Daniels just went all out. Good for you, Dyson. It's your moment. Don't let anyone yuck your yum. However, I will be yucking your yum. 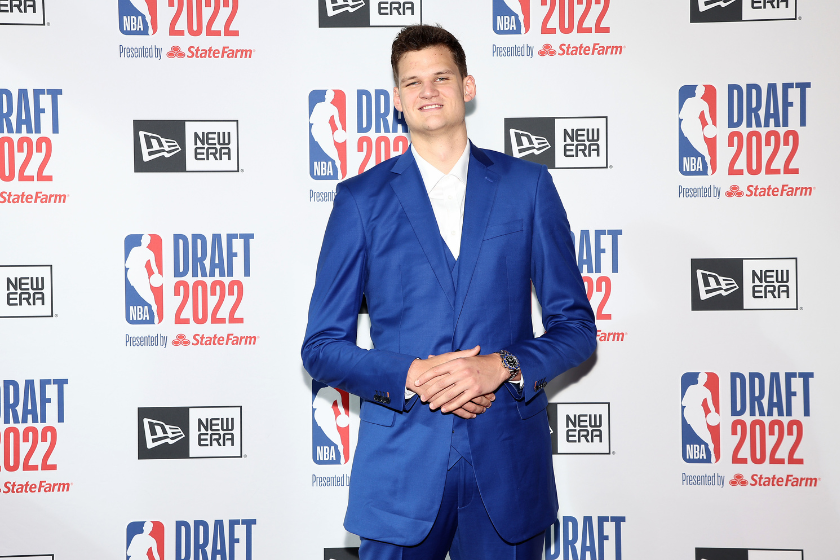 Walker Kessler, No. 22 Pick, Minnesota Timberwolves:  Walker. This ain't it. This is safe. This is simple. This is "My mom bought this suit." This is "Finance Bro Belting Journey at a Wedding." This is just not it. This is the bare minimum. 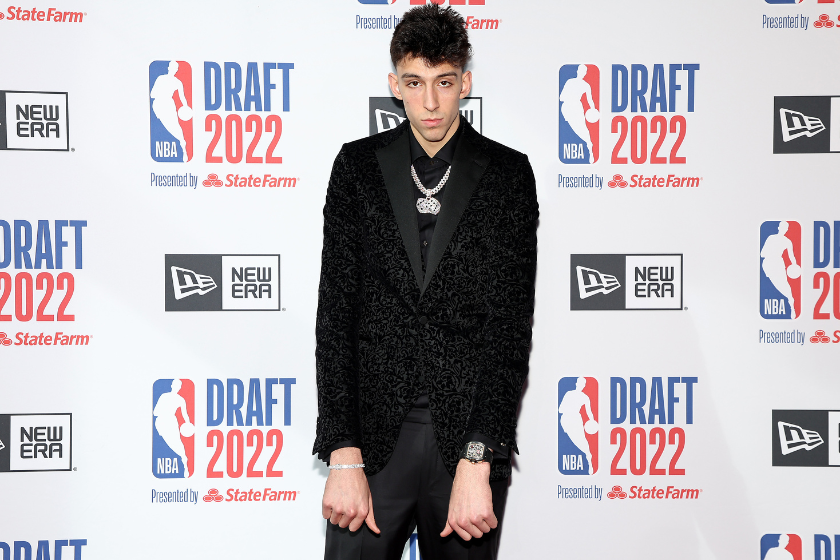 Chet Holmgren, No. 2 Pick, Oklahoma City Thunder: Nothing against my guy Chet, but this his whole look isn't doing it for me. Now, it's not the suit, which is your run-of-the-mill dark suit on Draft Night. My issue is with the tailoring for the Gonzaga big man. If you have an unconventional body, you have to go to a good tailor. A good tailor will turn any suit into one that looks like a million dollars. Instead, Chet's walking around like a high school freshman who is still figuring out how to walk int heir new body and just bought a suit off the rack at Nordstrom. Big baby giraffe vibes. The chain was on point, though.