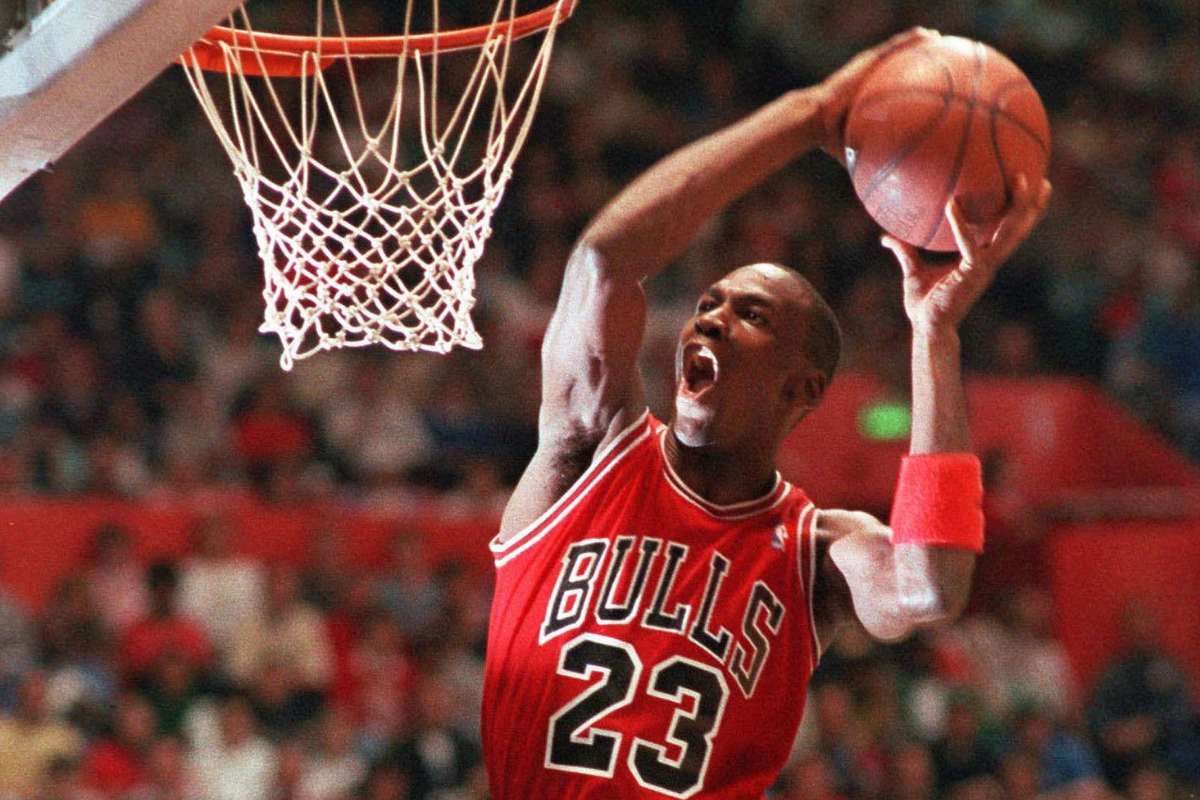 Dominique Wilkins, Vince Carter, LeBron James, Aaron Gordon, and Zach LaVine are just a few of the greats in the league’s long history.

However, no NBA player has ever dunked with the same finesse as the greatest basketball player of all time — Michael Jordan in his prime.

No, this is not a list about “Wizards Jordan”.

In his prime, the Chicago Bulls legend was going to dunk on you, no matter what. It didn’t matter if you met him in the NBA Finals, the playoffs, the NBA Slam Dunk Contest, the All-Star Game, or even at the free-throw line.

Michael Jordan was going to dunk on you. No. Matter. What.

The NBA’s greatest player was also one of its greatest dunkers.

What follows are the 23 (get it?) Best Michael Jordan Dunks Caught on Camera.

To the embarrassment of the many NBA players he thumbtacked to closet doors, we’ll start at 23 and work our way down to the No. 1 Michael Jordan Dunk of All Time.

Moses Malone got parted like the Red Sea for this dunk. Science can’t explain how Jordan bypassed Malone’s block, but it happened. Malone, a three-time MVP, would never be the same.

With the swing of his mighty ax, MJ sent Tree Rollins rolling like a Douglas fir. Do you see how large of a man Rollins is? He is a thick trunk to chop down. But Lumber Jordan chops him with ease.

The GOAT threw this flame down against the Heat and Ron Seikaly. Never heard of the big man? That’s because he’s just another faceless victim of Jordan’s career-ending dunks.

If Glenn Robinson is indeed a Big Dog, then it’s safe to say he was neutered in 1997. When it comes to slam dunks, GOATs always outperform dogs. This slam is even more impressive in slow motion.

Not content with shaming just one NBA big man at a time, Jordan slams it down over two Golden State big men — Ben McDonald and Joe Barry Carroll. Jordan possessed an athleticism in the 1980s that would make LeBron LeBlush.

Michael Jordan can jump really, really high. He can jump so high, in fact, that he has time to do things that have nothing to do with jumping while still in the air. Things like impersonate a windblown windmill.

The Leaning Windmill earned Mike a score of 50 during NBA All-Star weekend.

“No, no, no!” MVP MJ gave Hall of Fame Mutombo a taste of his own medicine in 1997. Mutombo responded to the mock finger wag with a finger of his own.

What do you do when you can’t go over 7-foot-7 Manute Bol? Go under and around him. This reverse baseline slam made Bol Bol’s late father look silly.

First, he steals it, then he hustles, then he slams it, then he makes it a three-point play. MJ opened the floodgates on Wingate, who came out of the affair looking worse than Watergate.

Victim(s): All of LA, even the Lakers

A very similar dunk to The Leaning Windmill except performed in a live game surrounded by scary 1980s NBA guys. I think of this slam whenever I think about the Clippers, just as an organization.

This dunk is extremely close to The Free Throw, but not quite. What it lacks in horizontal distance it more than makes up for with flair. The double-pump is cocky, fun, and flashy. Classic Air Jordan.

His Airness says this jam over Ewing is the best of the Knicks-Bulls rivalry, not to mention his personal favorite.

It is an emphatic slam on a much larger Ewing, who was famously difficult to dunk on. Look at the face of Ewing’s teammate after Jordan screams. His eyes say it all.

Have you ever heard of Jack Sikma? Me neither. Probably because MJ ended his NBA career in 1990. For the record, Sikma was a 6-foot-11 NBA center (and a Hall of Famer, or whatever). He was seven feet before Air Jordan stole an inch off him with this slam.

Ah… The Knicks. Madison Square Garden was Air Jordan’s playground, and he doesn’t even look like he’s trying for this jam. The Knicks look like they’re trying real hard, but MJ ain’t sweating it.

Mike took the sting out of Kelly Tripucka with this and-one. Tripucka literally turns around and tries to walk away, but it’s too late. His career was already over.

Okay, it’s harsh to call Pippen a victim here. He’s more like a beneficiary of MJ cleaning up a rare miss. Or maybe this was planned, who knows?

Who hasn’t tried this on the blacktop? It’s a simple dunk, but glorious to see in a professional game.

This is starting to feel like a New York Knicks hit piece. Then again, most stories about Jordan in the 80s and 90s feel like Knicks hate mail. Imagine being a Knicks fan.

His Airness was perfecting The Cradle since his days as a Tar Heel. He got it just right in 1984 against the Knicks, one of Jordan’s favorite punching bags.

It was Mike’s first time rocking the cradle in the NBA, though he did it again during the 1985 Slam Dunk contest.

Perhaps the most iconic of Jordan’s accomplishments in the air. Ballers of all levels dream of and attempt to re-create the free throw line dunk daily. How does he do it? I love how many flashes there are between him leaving the ground and dunking it.

This dunk is incredible. Mark “Eats-a-ton” Eaton is a 7-foot-4 mammoth, yet the GOAT engineers a textbook two-hand slam on the giant with barely a running start. Yikes!

MJ traveled to Italy in 1985 with Nike to promote his Air Jordan 1’s. While promoting his boots in the boot, Jordan donned a Stefanel Trieste kit for an exhibition match against Juve Caserta. Jordan made it rain buckets and glass on the Italians.

Maybe Mike bought the Hornets out of sympathy.

The whole city of Charlotte reportedly woke up with the morning-after sickness following Jordan’s double-dip baptism of Alonzo Mourning. Zo himself is still in Mourning over the incident. The video link will take you straight to the second of two dunks on Mourning.

Geez Louise, Mike. Did you have to do Bobby like that? And then hang on the rim? It’s just downright mean, man…

The “Calm Down, Michael” is the best dunk of Michael’s NBA career. Of his NBA career, you say…

Michael Jordan saved humanity from Swackhammer, the Monstars, and space amusement park enslavement with this buzzer-beating Space Jam. It’s universally regarded as the most important dunk of all time. Screw NBA history; this jam was for human history.

Few NBA players facing Jordan escaped his aerial assault. MJ in his prime was a problem, and his prime was most of the 80s and 90s. Look at the range on these dunks! From ’84-’97, Mike was doing the same damn thing.

Just like Kobe Bryant (RIP), Jordan’s goal was greatness. These dunks reflect MJ’s legend far more accurately than The Last Dance ever could.

These rankings are admittedly a matter of opinion. Sources from ESPN to Sports Illustrated will all rank slams their own way; this is just one source. It’s impossible to say for sure what his greatest dunk is, aside from Space Jam (obviously).

This is one GOAT debate that may never be solved.