The defending Champion Milwaukee Bucks and the Boston Celtics are meeting for the eighth time in the NBA playoffs. The Celtics, who narrowly snatched the No. 2 seed in the playoffs from the Bucks, came off their first-round sweep of Kevin Durant and the Brooklyn Nets. Milwaukee, on the other hand, came off a solid series win over the Chicago Bulls.

The Bucks and Celtics seemed destined to meet up in the Eastern Conference Semifinals, as they've grown accustomed to meeting in the postseason since the mid-1970s. As the two teams continue their second-round matchup, let's take a look back at past playoff meetings between these historic franchises. 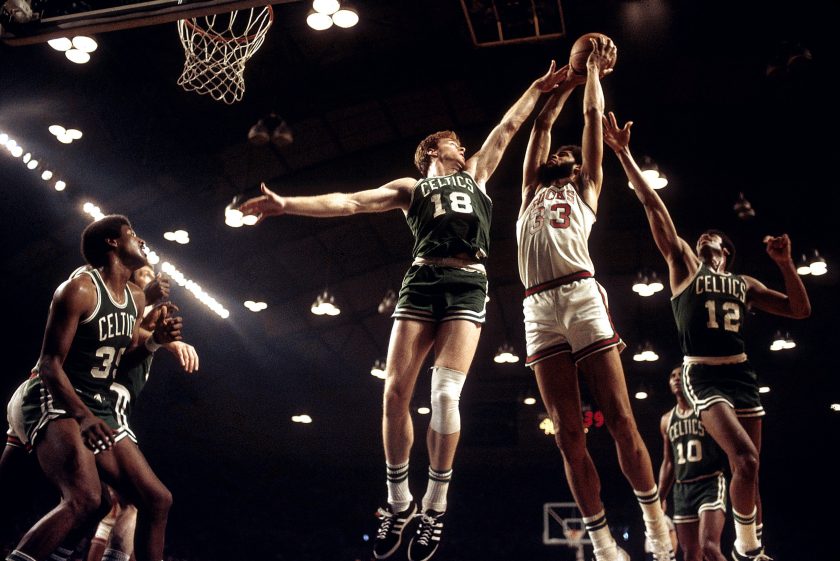 Led by end-of-his-career Oscar Robertson and an in-his-prime Kareem Abdul-Jabaar, the Bucks held home-court advantage in this series by virtue of their best-in-show 59-23 regular season record. The most memorable game was the Game 6 double-overtime thriller, won on a last-second sky-hook by Kareem in the Boston Garden. Unbothered, the Dave-Cowens-and-John Havlicek-led Celtics double- and triple-teamed Abdul-Jabaar en route to a 15-point Game 7 and NBA Finals victory in Milwaukee. This was the 12th title for Red Auerbach's team, but the first since the Bill Russell era came to an end.

Just a year later, in June of 1975, the Milwaukee Bucks traded away Kareem Abdul-Jabbar and Walt Wesley to the Los Angeles Lakers in exchange for immortal legends Elmore Smith, Brian Winters, Junior Bridgeman and Dave Meyers, four players you've almost certainly never heard of before. Following a few years in the toilet, the Bucks stayed in Milwaukee but moved to the Eastern Conference in the 1980s.

The Celtics, meanwhile, managed one more title in 1976 with the Cowens-Havlicek core. Arguably their greatest success of the '70s was an off-the-court move: the drafting of Larry Bird in 1979. Soon to be joined by Kevin McHale and Robert Paris, this Big Three led the Celtics to consistent success and three titles in the '80s. Along the way, the Celtics and the Bucks would meet four times in the Eastern Conference playoffs. 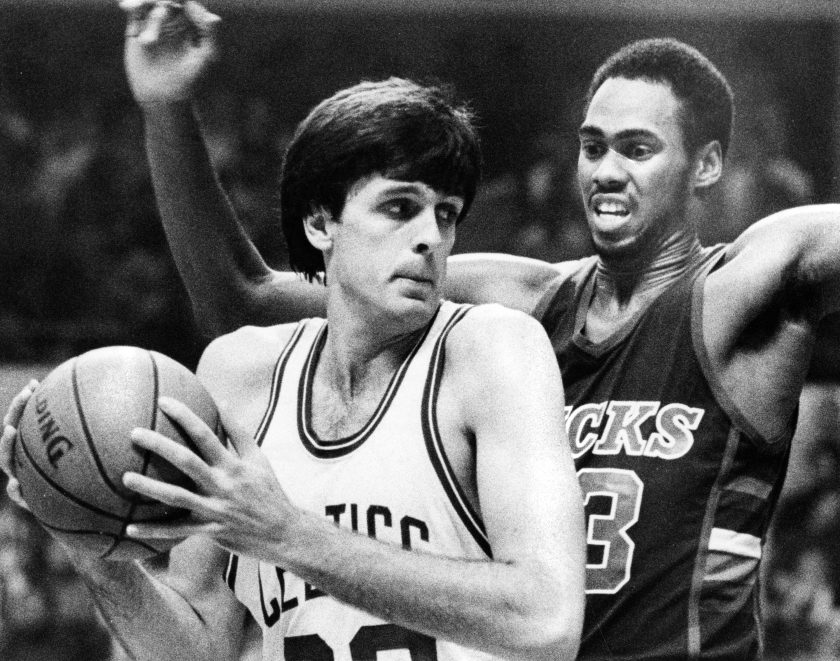 Ironically, the 1983 Celtics-Bucks matchup also featured Dave Cowens -- this time as a Buck. Cowens retired from the Celtics just before their 1980-1981 championship season began and took two years away from basketball before being traded to Milwaukee just before the start of the 1982-83 season.

Bucks head coach Don Nelson had played alongside Cowens on the '70s Celtics and thought the big man could help put Milwaukee over the top. Unfortunately for fans of old friends becoming new foes, Cowens was hurt much of his lone season in Cream City, including the duration of their playoff matchup with the Celtics. The Bucks, however, had no trouble with Boston, eliminating the Celtics in a clean four-game sweep behind Sidney Moncrief aka "Sid the Squid," undoubtedly one of the best aquatic-themed nicknames in NBA history. The Bucks would be bounced by the Philadelphia 76ers in the next round. 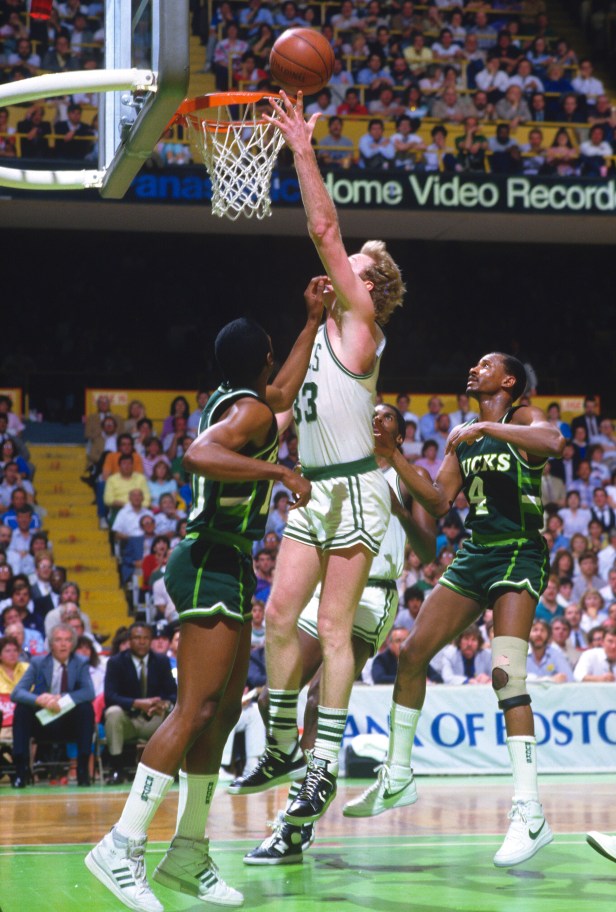 A year later, Milwaukee and Boston would meet again -- this time in the Eastern Conference Finals. Bird was a man on a mission, leading all players in the series in points, rebounds, assists and steals with 27.4, 10, 6 and 2.4, respectively. The Bucks managed to avoid a sweep with a Game 4 home win, but Larry Legend and the C's finished them off in five games. A gentleman's sweep, if you will. The Celtics went on to defeat the Lakers in an epic seven-game series for their 15th league title. 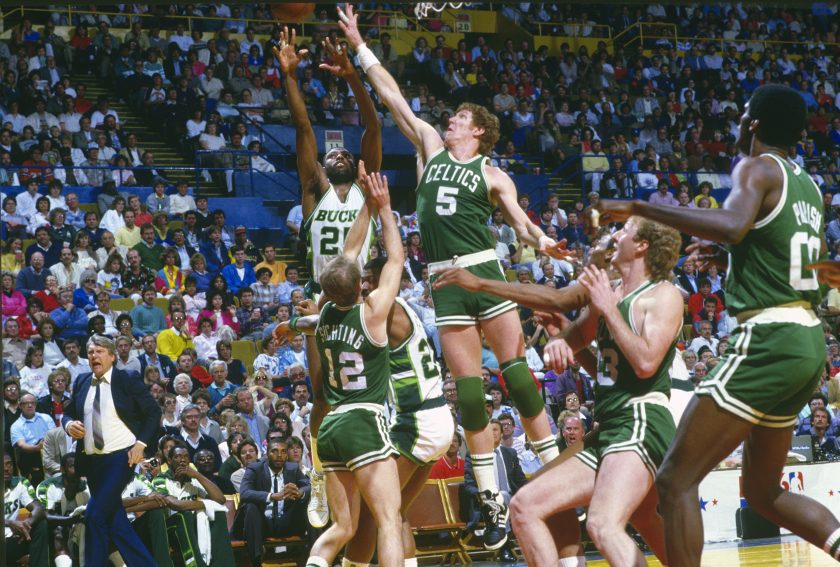 Two seasons later, the '86 Celtics met the Bucks in the Eastern Conference Finals once again. It's important to note them as the "'86 Celtics" because many New Englanders will still tell you the '86 Celtics are the best team in NBA history. With a 67-15 record in the regular season, including an eye-popping 40-1 home record, Boston was the team to beat in the 1985-86 campaign. Going into the playoffs, the general mood of Celtics fans could be summed up as follows:

At 57-25, the Bucks were no slouches. In fact, the 1985-86 season marked the seventh consecutive division title for Milwaukee. However, they were no match for Boston. The Celtics swept the Bucks, with an average margin of victory of 15 points. All told, Boston would drop just three games in the 1986 NBA Playoffs, as they hoisted the championship trophy for the 16th time. 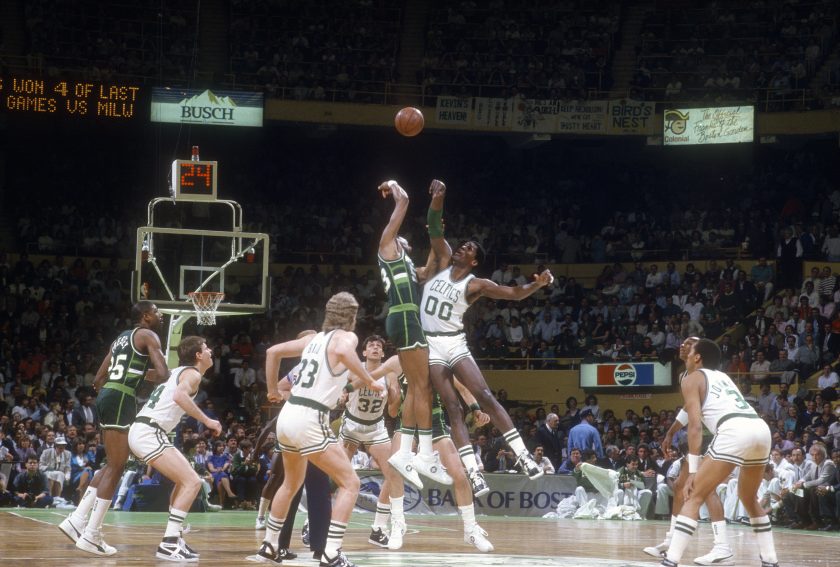 The two met for a final time in the 1980s one year later, this time in the second round. An epic seven-game battle ensued, with five games decided by six or less points. Terry Cummings and Calamari Moncrief led the Bucks, averaging over 20 points per game for the series. The Bucks were also bolstered by the addition of longtime Seattle big man Jack Sikma, who averaged nearly 18 points and 10 rebounds for the series. Sikma is best known as the proprietor of the reverse pivot face up, AKA the Sikma move, emphatically described by Hubie Brown, who appears just as old in this video from like 30 years ago as he does announcing NBA games today. Hubie is literally 88 years old.

The Celtics and Bucks took a casual 31-year break before remounting their rivalry within the past four years. The feel-good '90s were not kind to Boston and Milwaukee, with both teams combining for just seven playoff appearances in the decade. Things picked up a bit at the turn of the century, with each team making a conference finals appearance in 2001 and 2002. The Celtics' new Big Three of Kevin Garnett, Paul Pierce and Ray Allen led to banner No. 17, another Finals appearance and several other highlights between 2008 and 2013.

Just as the drafting of Larry Bird shaped the Celtics franchise in the 1980s, Milwaukee's selection of future NBA MVP Giannis Antetokounmpo changed the trajectory of their franchise. The Greek Freak's second playoff appearance came against the 2-seeded Celtics in the spring of 2018. Boston's star small forward Gordon Hayward was lost for the season on opening night and their star point guard Kyrie Irving was injured late in the season, so even though Boston was the higher seed, they still felt like a scrappy group of over-achievers. 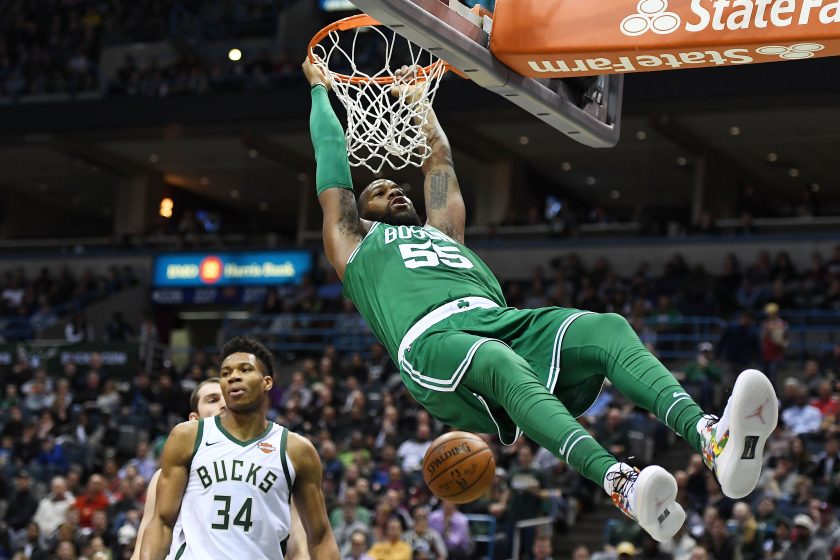 A seven-game, back-and-forth, slobber knocker ensued, with Khris Middleton and Antetokounmpo leading Milwaukee to the brink of the second round but falling short as Boston took advantage of home-court advantage to prevail. In an early post-game press conference, a young Terry Rozier referred to Bucks starting point guard Eric Bledsoe as "Drew Bledsoe." An accident? A dig? Unclear.

When Bledsoe was asked about the play of his counterpart Rozier, his response of "Who?" seemed to fuel Rozier, who continued to have a breakout performance throughout the series, averaging 17.6 points and 6.7 assists. Because Boston sports is the way it is, this all culminated in Drew Bledsoe attending a playoff game and Terry Rozier wearing a Patriots Bledsoe jersey to a later game. Ah, pettiness. 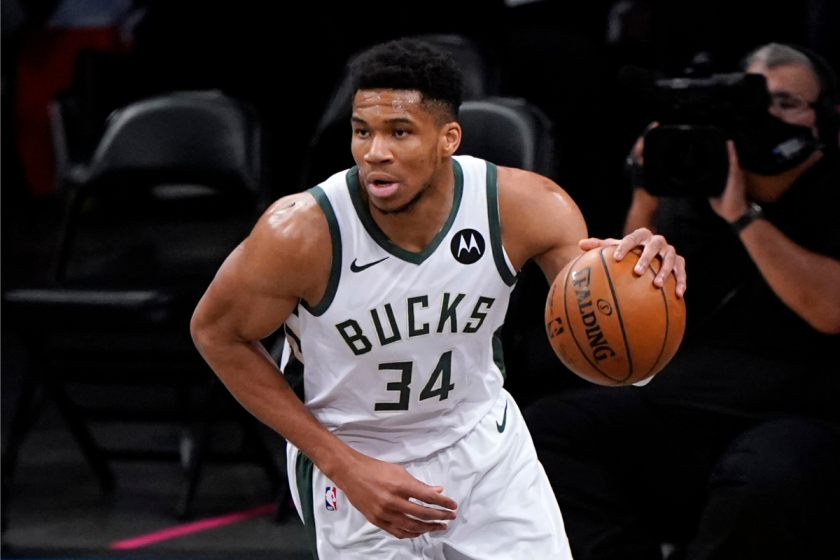 In 2019, the Bucks and Celtics met in Round 2. This time, the Bucks held home-court advantage. Truthfully, it did not matter. After coming out strong in game one, Boston self-imploded as Giannis overpowered the Celtics, averaging 28.4 points, 10.8 rebounds and 5.2 assists per game. The Boston Celtics-Kyrie Irving era reached its nadir as he waived away defensive help from Jaylen Brown, Al Horford, Jayson Tatum and others, insisting on guarding Giannis by himself, to predictably disastrous results. The Bucks won four straight, taking the playoff series in convincing fashion.

Now, the Celtics and Bucks meet once again. Boston has the higher seed, but Milwaukee is the defending champ. Will the ascension of Jayson Tatum to super-star status continue? Or will Giannis stomp out Boston's championship hopes? Only one way to find out!

MORE: How Ime Udoka Turned the Celtics Around Overnight