The Minnesota Timberwolves raised a lot of eyebrows when they traded five players and five picks for Rudy Gobert in July. Sure, Gobert is a three-time NBA Defensive Player of the Year, but is he, let alone anyone, worth that haul?

As a Timberwolves fan, I was apprehensive at first, but then I thought about it some more. Our franchise can't do any worse than it has. Do we want to continue playing for draft picks or championships? It remains to be seen if Gobert will be the one to lift us over the edge, but at least he, Karl-Anthony Towns and Anthony Edwards make us competitive -- something we've only been able to say a few times in our 33-year existence.

So yeah, on the court, the Gobert trade makes sense. In the front office, it screwed up the trade market across the league. Take the Brooklyn Nets and Kevin Durant for instance.

Durant wanted out, but the Nets, seeing the return the Utah Jazz got for Gobert, were asking for the farm and then some. Granted, Durant is arguably the best player in the league, but the Nets rejected an offer from the Boston Celtics that included Jaylen Brown, Derrick White and a draft pick. They countered by asking Boston for Brown, reigning Defensive of the Year Marcus Smart, multiple picks and one more rotational player. The Celtics politely declined. The Nets also reportedly offered Durant to the Wolves for Towns, Edwards and four draft picks. Lol.

Meanwhile, in Salt Lake City, Danny Ainge was laughing on top of his pile of draft picks and trade pieces. Entering a full-on rebuild, he even had a bullet in the chamber in three-time NBA All-Star Donovan Mitchell. Finally, after months of rumors, Mitchell finds a new home in Cleveland.

RELATED: If Danny Ainge Calls, Hang Up: He Proved Why in Boston & He's Proving it Again in Utah

The trade comes after months of speculation the Jazz would move Mitchell to the New York Knicks, but after the Knicks signed Jalen Brunson in free agency and inked budding star R.J. Barrett to a four-year rookie extension worth up to $120 million, an agreement looked less and less likely. However, hours after the trade Woj revealed the Knicks offered Barrett, Obi Toppin, Mitchell Robinson and three unprotected first-round picks AND AINGE TURNED IT DOWN. My guess is he was asking for the Lower East Side and the New York Rangers, too.

Out of the blue, the Cavs emerged, and after dealing their two biggest stars, the Jazz are giving the Oklahoma City Thunder a run for their money in asset collection. Here's what Ainge has stowed away:

All in all, the Jazz have 13 first-round draft picks until 2029. Oh yeah, Ainge also hired a new coach in Will Hardy. I doubt he's done, either. Contributing veterans like Mike Conley Jr., Jordan Clarkson and Bojan Bogdanovic are still available to be dealt. If this seems familiar, it's because he essentially did the same thing in Boston in 2013.

Utah is set to have a rough next few years, but there's a shining light at the end of the tunnel. On the other hand, the Cavs become an immediate threat in the Eastern Conference.

What Mitchell Brings to Cleveland 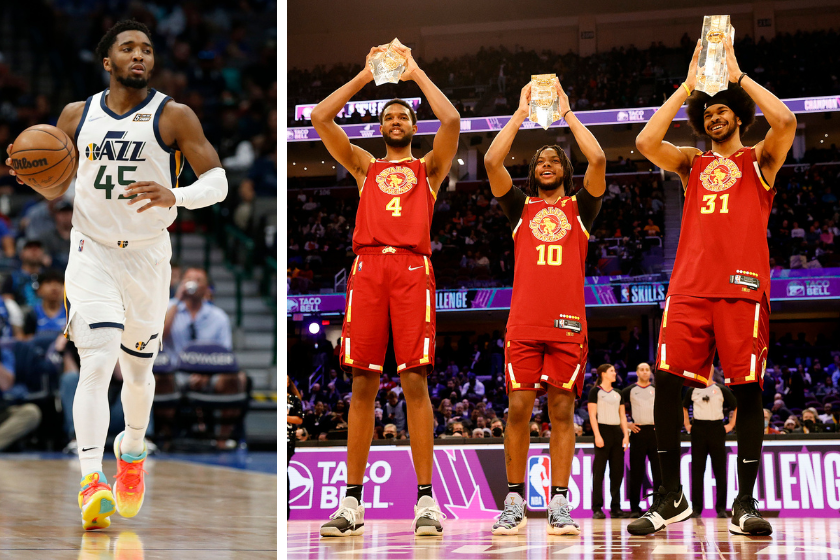 Cleveland's young core of Darius Garland, Jarrett Allen and Evan Mobley was exciting on its own. Add Mitchell, and we're talking about the best collection of young talent in the NBA. Garland and Allen were All-Stars last season, and Mobley is a superstar in the making.

Sharing the back court with Garland allows Mitchell to work his magic off the ball, but Garland is just as capable playing off the ball if Mitchell takes over as the primary ball handler. Garland has already expressed his excitement on Twitter.

Plus, the two-man game between Mitchell and Mobley will be delicious. Mobley has the tools to be the most dangerous roll partner in the game with his gangly lob catching ability and improving three-point stroke. Allen is a beast lob catcher as well.

You may have noticed there's a gap at small forward. Well, the Cavs made sure to hold onto their 2024 first-round pick when the certain son of a certain northeast Ohio native will be eligible for the NBA Draft. That certain someone has publicly declared his intent to play with said prospect. (Hint: his name rhymes with DeRon Frames. A man can dream, can't he?)

Still, this is the most parity we've seen in recent memory. Anyone can beat anyone on any given night. All I know is the Cavs will be must-watch TV.