The Final Four is all set, and it's featuring some of the best programs in college basketball. Combined, North Carolina, Duke, Kansas and Villanova have 8,773 wins, 17 National Championships and 61 Final Fours. Of course, the matchup between Duke and North Carolina will get a ton of attention for obvious reasons, but I'm confident that Kansas and Villanova will put on a show for us in the first National Semifinal contest.

For some odd reason, people love to focus on the teams who had the "easiest paths" to the Final Four, without acknowledging the fact that each March Madness finalist was tested at some point during the first four rounds. It's important to commend all of them for finding ways to win and extending their individual seasons. So, let's dive right into the Final Four team previews ahead of tip-off in New Orleans. 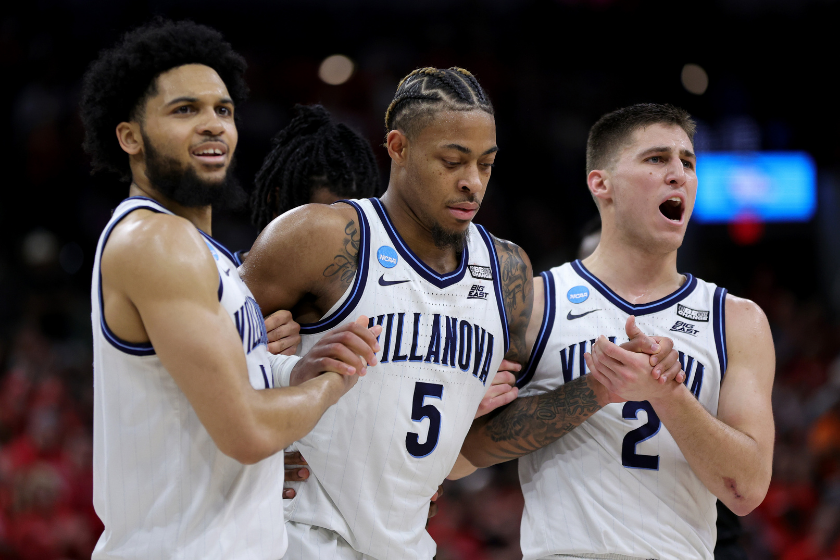 Related: The Villanova Wildcats' All-Time Starting 5 is as Gritty as it Gets

Villanova suffered a tough blow when they found out that Justin Moore tore his Achilles Tendon late in the Wildcats' 50-44 win over the Houston Cougars last week. What's the worst part about it? Well, Moore was a 14.8 PPG scorer when healthy who could make advanced reads while backing defenders down in the low post. With that being said, I'll be the first one to tell you that there's no reason to lose faith in head coach Jay Wright's club. Why? Well, because the Wildcats don't need one player to shine for them to secure victories.

Their methodical approach to the game creates headaches for opponents and enables them to get high-percentage looks consistently. An average offensive possession for the Wildcats lasts 19.9 seconds, which means that you shouldn't expect the South Regional champions to bail out undisciplined defenses. It may not be the most exciting style of basketball to watch, but it frequently results in successful offensive trips for the Wildcats. If you're able to tune into their Final Four contest against Kansas on Saturday, you'll notice that every player that Jay Wright puts on the floor is capable of shot faking effectively, remaining under control during their drives and jump-stopping before making plays in the paint. When defenses over help and leave Collin Gillespie (40.9 percent three-point shooter), Caleb Daniels (37.7 percent three-point shooter), or Eric Dixon (51.4 percent three-point shooter) open on the perimeter, they usually struggle to put together multiple kills defensively (three stops in a row).

Judging by Nova's Elite Eight game against Houston, the Wildcats are willing to win ugly if scoring points happens to be a massive challenge for them. They finished the contest with just 50 points, but managed to hold the Cougars to 44 points on 29.8 percent field goal shooting and 5.0 percent three-point shooting (they only netted one triple in the ballgame). I'm not saying that the Wildcats will prevent the Jayhawks (who score 78.3 points per game) from notching more than 44 points, but they have all the defensive tools necessary to turn the contest into a slugfest during crunch time. They take away driving lanes from ball-handlers, slide over to take charges when need be and give shooters plenty of room to land while heavily contesting their long-range jumpers. It certainly won't be easy, but the Wildcats' remarkable attention to detail and impeccable instincts will give them a chance to come out victorious on Saturday. 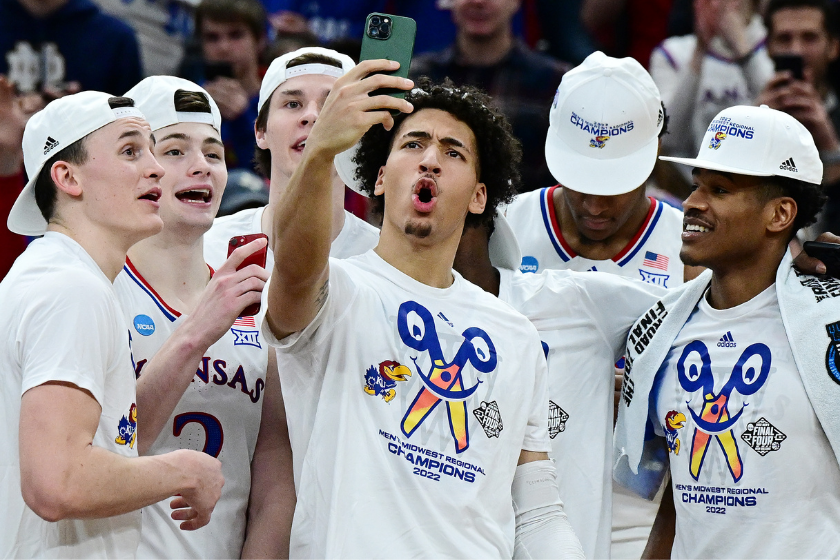 While Villanova likes to slow the game down and execute their half-court offense, Kansas prefers to quickly push the ball up the floor and outrun their opponents on the offensive end. I mean, how are you going to score nearly 80 points per game if you walk the ball up the court every possession, right? In preparation for Saturday's game, I suggest that the Wildcats review the Jayhawks' superb offensive performance against the Miami Hurricanes in the Elite 8.

It seemed like the Hurricanes sulked after every missed basket in the second half, which led to several breakaways and runouts in the final 20 minutes of the ballgame. If the Wildcats elect to feel sorry for themselves every time the ball fails to travel down the net on Saturday, the Jayhawks will feast in transition and force Jay Wright to burn his timeouts early. If they sprint back and make the Jayhawks operate in a half-court setting, they'll still have their hands full defensively. David McCormack is a dominant force inside when he takes his time and takes on-balance shots in the paint. The Hurricanes didn't have an answer for him when the Jayhawks delivered the ball to him in a timely fashion, which prompted him to utilize his size advantage possession after possession (he finished with 15 points on 6-7 shooting from the field).

As it relates to Kansas' guard play, I don't know where the Jayhawks would be without Remy Martin. His two efficient scoring outings against Creighton and Providence propelled the Jayhawks to victory in the Round of 32 and Sweet 16. Although he didn't have his best game against Miami in the following round, his reliable shot-making in the first half kept Kansas in the contest. Most Kansas fans are patiently waiting to see the version of Ochai Agbaji that dropped 37 points on Texas Tech in January, but let's appreciate the fact that the John R. Wooden Award finalist showed up in the second half of the Jayhawks' lopsided 76-50 victory over Miami. He scored 12 of his 18 points after the break and appeared to be more assertive offensively. If Bill Self's main offensive threats come to play and the Jayhawks can score easy transition baskets, they'll be in great shape down the stretch of the contest. 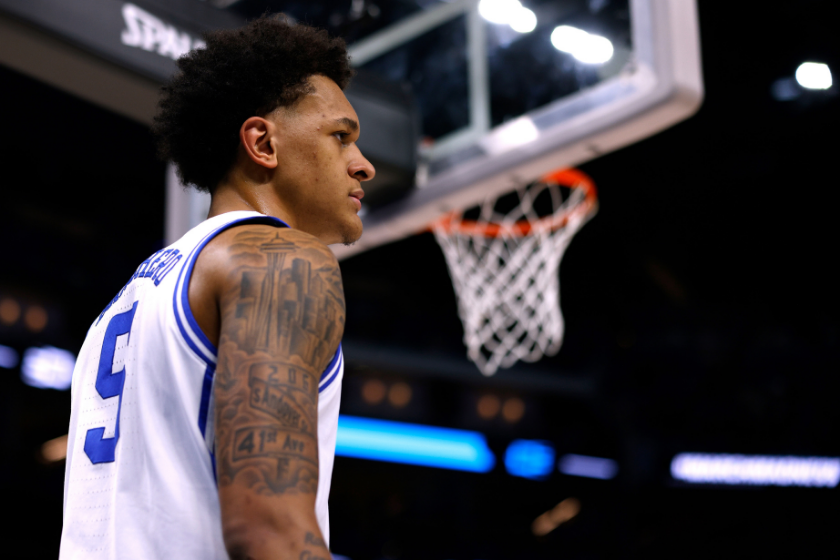 Related: Coach K: Inspiring A Generation of Basketball Fans Across the Country

Prior to last week's West Regional title game, numerous college basketball writers/analysts were already looking ahead to a potential Duke vs. UNC Final Four matchup. Why? Well, because they knew that the Blue Devils' offensive firepower would overwhelm Arkansas. The Razorbacks can certainly defend better than many people give them credit for, but shutting down multiple prolific scorers on the Blue Devils' roster was a task that proved to be impossible for Eric Musselman's bunch.

And now, the Battle of the Blue Bloods has arrived.

It's tough enough to prepare for a team that has one or two elite offensive players, but when a team has a whole starting lineup full of weapons and talent on the bench as well, it's safe to say that you're in major trouble. Let me break it down to you like this, the Blue Devils should never freak out when one of their stars is having a rough night offensively. If Paolo Banchero doesn't have the magic touch on the perimeter or in the paint, Jeremy Roach, Wendell Moore Jr., AJ Griffin, Trevor Keels and/or Mark Williams can pick up the slack on that end of the floor. In other words, there's a reason why the Blue Devils always convert clutch baskets when it's go-time. Their top six scorers are all shooting above 41 percent from the field and refuse to shy away from big moments. When Coach K spreads the floor and gives Duke's best playmakers countless opportunities to create off the dribble, the Blue Devils are basically unguardable in the half-court.

At times, it feels as though they happily take turns torching their defenders on the offensive end. As a team, they rank 1st in the country in adjusted offensive efficiency, meaning they score more points per 100 possessions than every other Division 1 college basketball team. That should tell you that the Blue Devils are all about business offensively and don't waste time throwing up prayers that'll result in bricks and airballs nine times out of ten. At the end of the day, the Blue Devils may find themselves trailing the Tar Heels late in the contest, but they'll have plenty of options to turn to if they need to score baskets in a hurry. 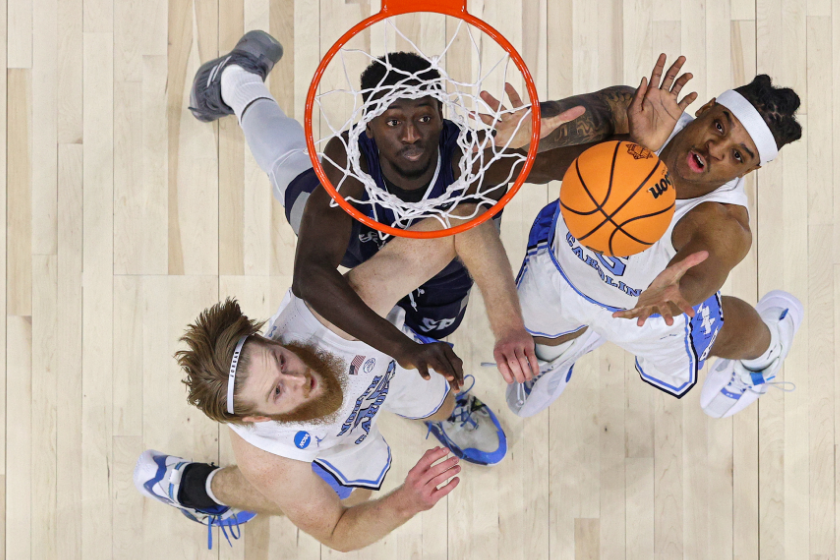 Related: Hubert Davis' Wife Leslie Has Been His Rock Through Tragedy and Triumph

Speaking of offensive weapons, North Carolina also has multiple guys who can heat up fast offensively. They've already had four different players step up and lead the team in scoring in the NCAA Tournament. Brady Manek notched 28 points against Marquette, R.J. Davis exploded for 30 points against Baylor, Caleb Love scored a career-high 30 points against UCLA and Armando Bacot netted 20 points against Saint Peter's.

Love's 30-point performance stood out to me the most, because he's been labeled as an inconsistent player all season long. Is Love going to show up and score 20+ points? Or take the day off and only put up five points for the Tar Heels? Well, we never really know, but it was great to see the former McDonald's All-American enter a zone against the Bruins and take over the Sweet 16 contest. When he's mixing it up and making confident decisions with the ball in his hands, he can effortlessly put the Tar Heels on his back. R.J. Davis' ability to get into the paint and Armando Bacot's strong presence inside certainly help give Hubert Davis' squad a major lift offensively, but they're a different team when Brady Manek gets it going from beyond the arc. The 6-foot-9 senior sharpshooter is shooting 39.8 percent from deep and has made at least three triples in every NCAA Tournament game. If he's able to get a few three-pointers to fall early in a ballgame, defenders can only hope that he misses rhythm perimeter jumpers later on.

In the Tar Heels' last game, however, the focus was more on their stifling defense than their steady offense. Unlike the Peacocks' first three opponents, North Carolina made the MAAC champions uncomfortable as soon as the East Regional Final commenced and never allowed them to find their footing. If you paid close attention to the game, you probably noticed that the Tar Heels prohibited the Peacocks from walking into open pull-up jumpers, cutting freely toward the rim and getting them out of position defensively. Teams score 71.1 points against the Tar Heels on average, but Shaheen Holloway and company only hung 49 points in the game that determined who would advance to the Final Four. If the Tar Heels put on another defensive clinic on Saturday against Duke and bring their 'A' game offensively, they might end up defeating the Blue Devils for the second time this season.

MORE: One Shining Moment: How a Man, a Napkin & a Dream Created College Basketball's Anthem