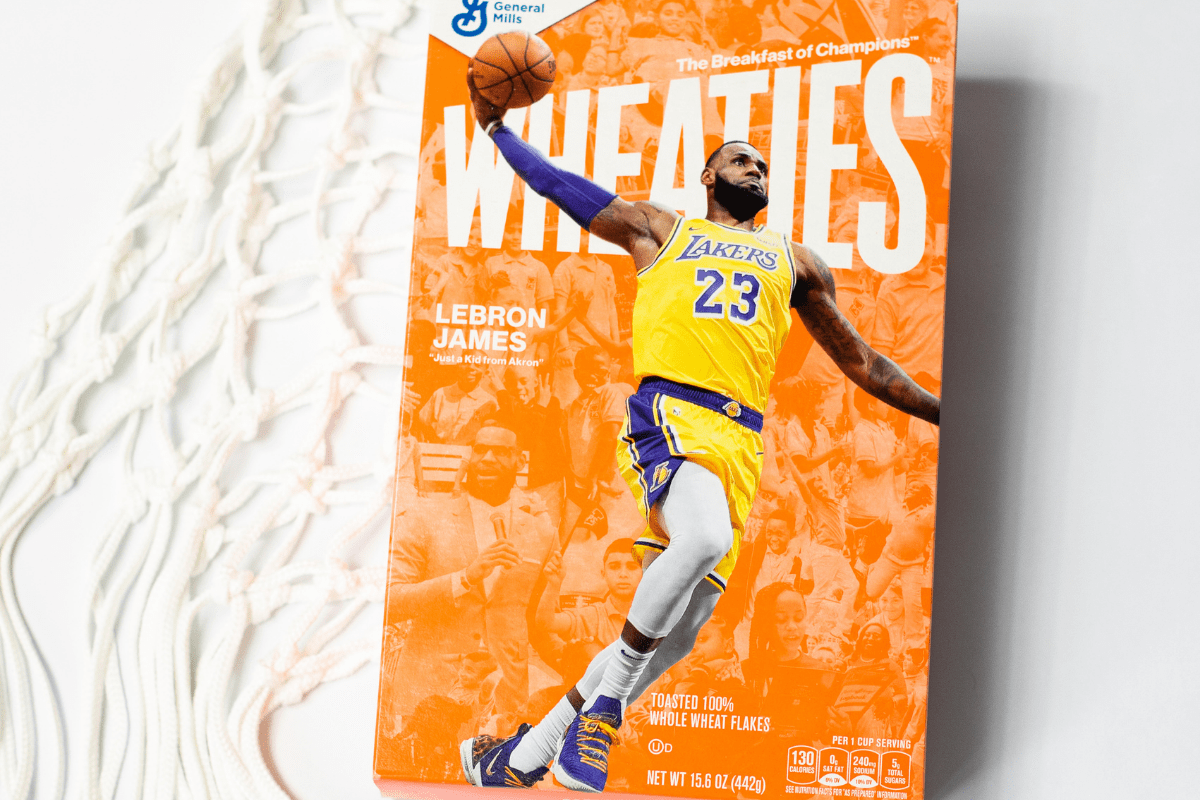 Los Angeles Lakers superstar LeBron James is the epitome of greatness. It?s the truth. Everything he does, whether it?s on the NBA court or in the community, is historic. We are all just witnesses to this once-in-a-generation athlete and his latest accomplishment can best be described as iconic.

James? resume (and his net worth, for the matter) is truly in a league of its own. These days, it?s almost impossible for him to lace up his Nike sneakers and not break some sort of record. That?s how dominant he has been on the hardwood throughout his legendary career and it was rewarded once again in a big-time way.

On October 7, 2020, a day after the Lakers took a 3-1 series lead over the Miami Heat in the 2020 NBA Finals, James became the next athlete on the new Wheaties cereal box with his I Promise School in Akron, Ohio.

Champion is not who you are. It’s what you do. We’re proud to announce that @kingjames, along with the students and community from @ipromiseschool, is our next Wheaties Champion. ORDER NOW: https://t.co/e3rbHdaXmq #ChampionOfChange pic.twitter.com/RPkTxIhoif

For everything LeBron James has accomplished during his basketball career, both in the regular season and playoffs in Cleveland, Miami, and now LA, it?s hard to believe he has never been on the cover of the iconic orange box until now.

It?s better late than never, however, and he joins an exclusive MVP Breakfast for Champions club that also featured Lou Gehrig, Michael Jordan, Tiger Woods, Mary Lou Retton, and Serena Williams, among others, over the years.

In addition to the announcement by the General Mills cereal during the coronavirus pandemic and COVID-19 outbreak, a short video was also shared on social media by the I PROMISE School and The LeBron James Family Foundation.

Our kids?! LeBron?! The @wheaties box cover?! What an honor and inspiration it is for our scholars to see themselves on the iconic Wheaties box alongside their hero, leader, and true champion of change. @KingJames
#IPROMISE #WeChampionpic.twitter.com/h5qQjIOlpD

The I PROMISE program, in partnership with the LJFF and Akron Public Schools, helps kids, including at-risk students, earn a high school education and free tuition to Kent State University upon completion.

It puts a completely new meaning to Breakfast of Champions.

?We all know LeBron James for his record-breaking basketball career, but his achievements off the court truly set him apart,? Wheaties brand experience manager Taylor Gessell said in a statement. ?From starting the LeBron James Family Foundation, to boldly speaking out on racial injustice, to launching the I Promise School – LeBron is a champion of change who is using his sports platform to better the world. We couldn?t be prouder to feature such a positive force of inspiration for the next generation of champions on Wheaties? historic box.?

Needless to say, the next Wheaties box is certainly going to fly off store shelves.

?Growing up where we come from, to see my I Promise kids and families from Akron, Ohio, represented on the iconic Wheaties box means everything,? James said in a statement. ?The movement we?ve started in Akron is about doing our part to uplift our community by first listening and then responding with the resources they need. We will continue to do everything we can to create a better future for our kids and our community, and it starts with the students, teachers, and everyday champions you see on this box.?