Any way you slice it, Michael Jordan is the greatest. You can start with the six NBA championships, five MVP awards and 14 All-Star Game selections, or you can compare the billionaire Charlotte Hornets (formerly the Bobcats) owner's net worth to Lakers star LeBron James' fortune and base your opinion off that.

Air Jordan is an NBA Legend; there's no debating that.

MJ rose to stardom for his ability to hit clutch shots in college at North Carolina and his fierce competitive nature playing for the Chicago Bulls. The superstar hooper launched his own Jordan brand of shoes and clothing under Nike. His Airness also starred as an actor in the iconic basketball movie "Space Jam."

Much of Jordan's Hall-of-Fame basketball career has been viewed under a microscope, including in ESPN's docuseries "The Last Dance," which hit Netflix in July of 2020. Yet while Jordan is the most famous basketball player of all time, he's maintained a relatively low profile and personal life off the court.

No. 23 has been married twice and has five children in total, but who are his first and second wives? 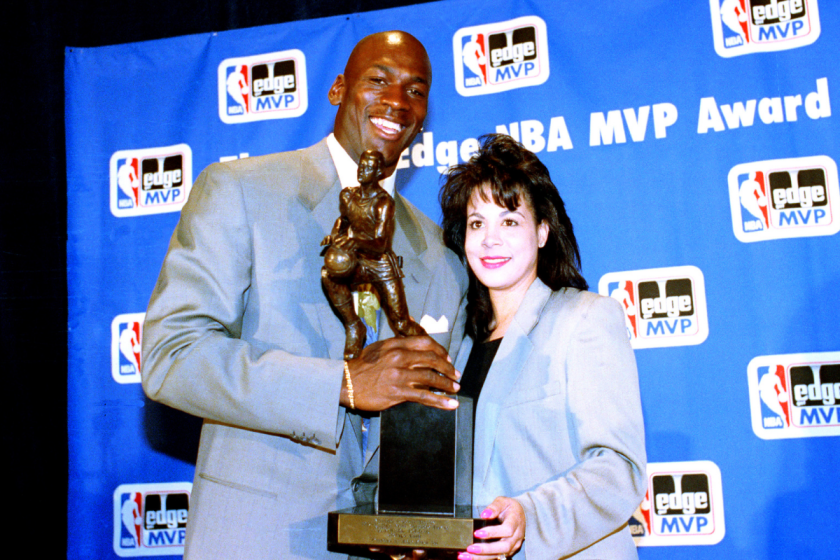 Michael Jordan's ex-wife Juanita Vanoy was actually a few years older than her future husband when the two met in Chicago, Illinois. Born in 1959, Juanita is from the Southside of Chicago and was working as a model when she met the basketball superstar.

After her modeling career, Vanoy began working as an executive secretary at the American Bar Association. Jordan's ex-wife headed the Michael and Juanita Jordan Endowment Fund while the two were married and ventured into the real estate business later in her career.

How Did MJ and Juanita Meet? 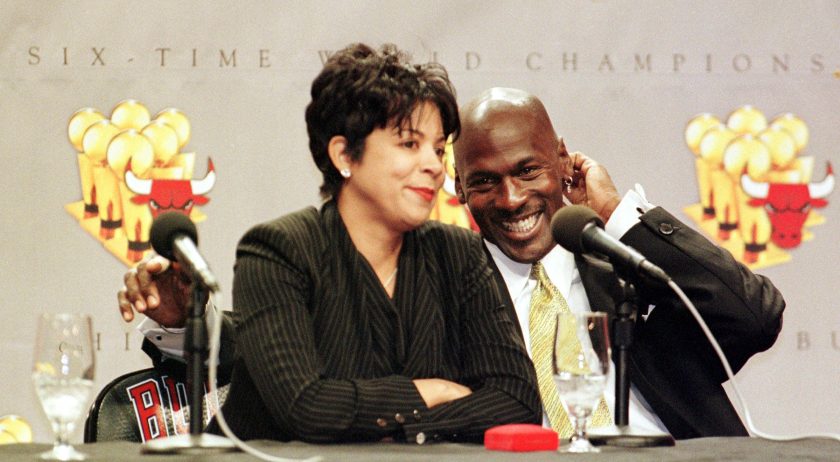 Where else does a model meet a basketball star than at a Chicago restaurant? The pair were introduced to each other by a mutual friend in 1985 during Jordan's second season with the Bulls. Jordan wrote in his autobiography that he admired how Juanita waited for him to notice her instead of gushing over him like most women did at the time.

Four years later in 1989, Jordan made Juanita basketball's First Lady when they tied the knot in Las Vegas while their first child, Jeffrey, was still a baby.

"I'm happy. It was a big move getting married," Jordan told The Washington Post at the time. "It helped me mature."

"The Last Dance" director Jason Hehir said he intentionally left Vanoy out of the docuseries even though she was a major part of his career.

"I wasn't interested in the opinion of any wife or kids in this," Hehir told The Athletic. "We had the storytellers we wanted, and I felt like we had the story covered from every angle." 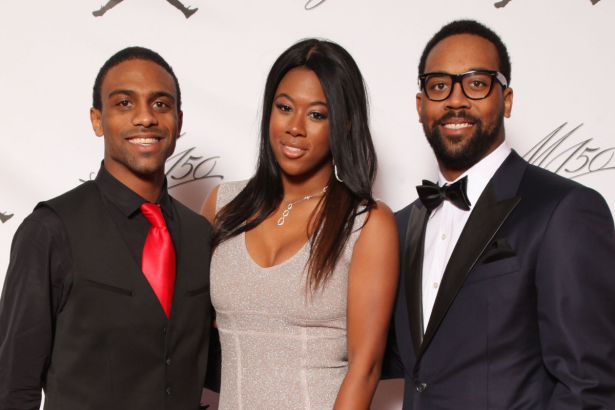 RELATED: Michael Jordan's Kids Have a Life Outside of His Airness' Shadow

Jordan has three children from his first marriage -- two sons, Jeffrey and Marcus, and a daughter, Jasmine. Neither of his sons excelled on the court like Jordan enough to make it to the NBA.

Jeffrey Jordan was born in 1988 and played college basketball for Illinois and the UCF Knights but didn't play professionally.

Marcus Jordan, born in 1990, also played for UCF. The younger Jordan son once wore his dad's Nike Air Jordan shoes during a game despite UCF being signed with Adidas at the time. Adidas ended its sponsorship deal with the school but Nike then signed them thanks to some help from His Airness.

Jasmine Jordan graduated from Syracuse University, where she met basketball player Rakeem Christmas. The two got engaged and welcomed a baby in 2019, making MJ a grandfather. 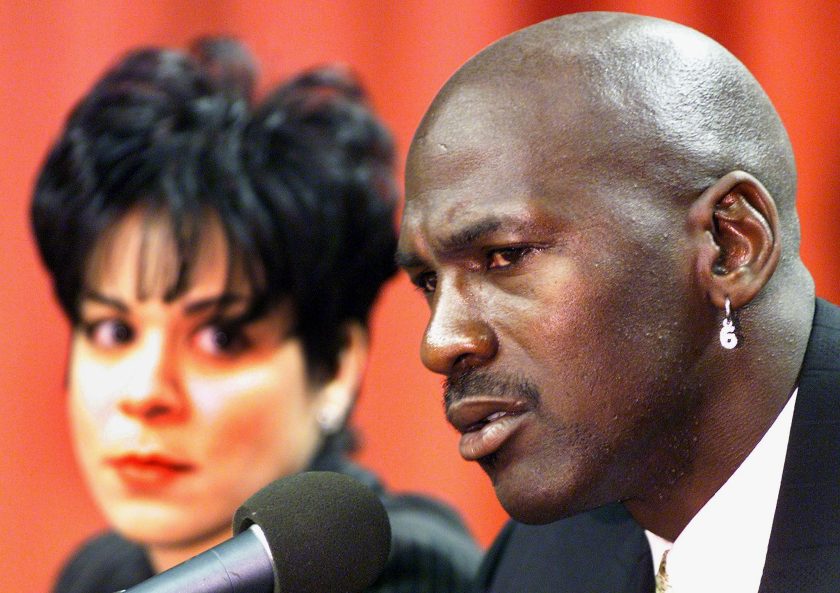 Jordan and Juanita were happily married for 12 years before they began running into problems.

In 2002, they filed for divorce citing "irreconcilable differences" but managed to salvage their relationship for another four years. Then in 2006, the NBA star couple officially parted ways on mutual terms.

Considering Jordan made more than $93 million in NBA salaries alone plus a whole lot more in endorsements and sponsorships, Juanita was set for a hefty a payday after the divorce. She received an eye-popping $168 million divorce settlement, plus an undisclosed cash payment for the couple's Chicago home they shared during their 17-years of marriage marriage.

Now, Vanoy lives quite comfortably in the Kingsbury Estates section of Chicago in a $4.7 million house she bought in 2007. 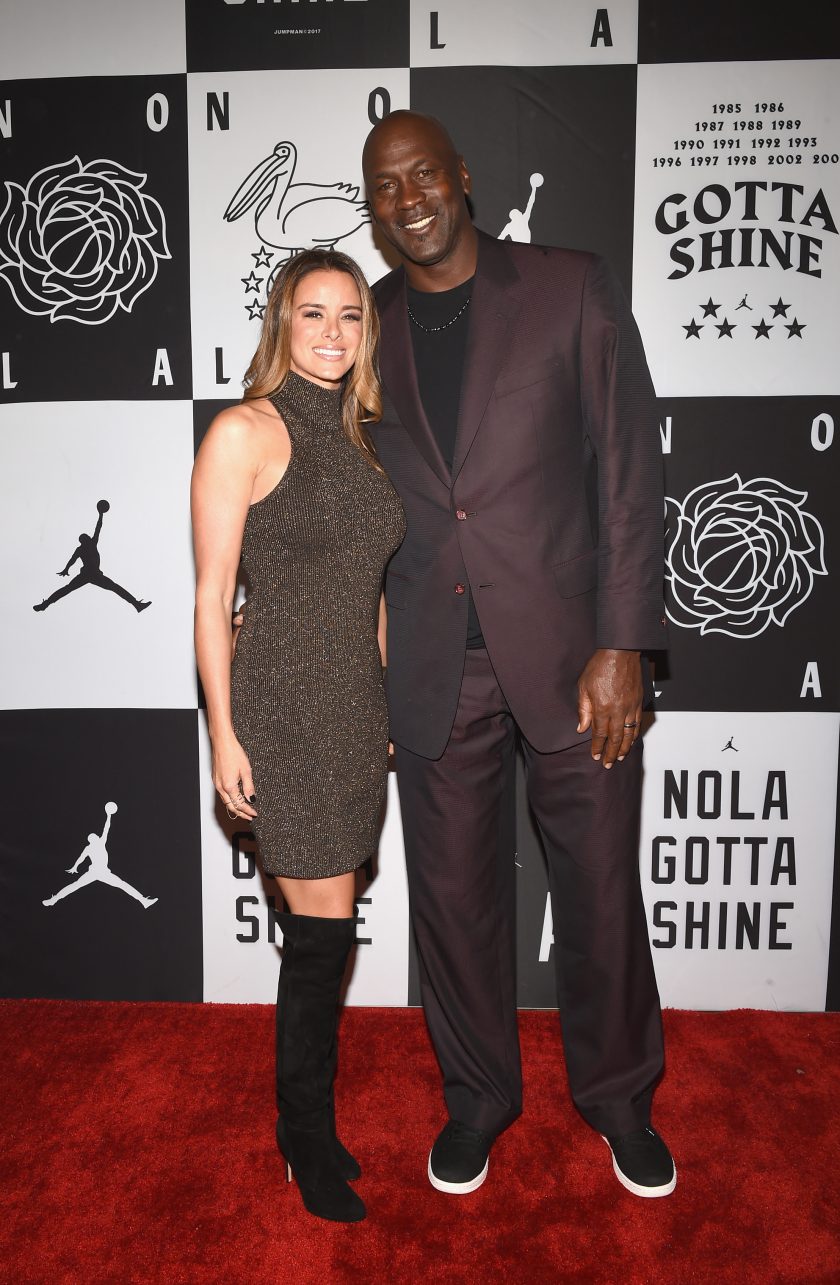 Basketball legend Michael Jordan's current wife, former model Yvette Prieto, is Cuban and grew up in Miami, where she was a successful model for designers like Alexander Wang.

She was born in 1979, making her some 16 years younger than the 58-year-old basketball legend. Prior to meeting Jordan, Prieto reportedly dated the brother of singer Enrique Iglesias, Julio Iglesias Jr.

Jordan's Cuban-American model wife reportedly caught his eye at a nightclub in 2008. After seeing each other regularly, Jordan and Prieto moved in together in 2009 and he made her his fiancée in 2011, the same year the Air-ess starred in "Cuba: An Island Apart."

According to US Weekly, the two eloped in 2013 near Jordan's 28,000 square-foot home at the Episcopal Church of Bethesda-by-the-Sea in Palm Beach, Florida. She wore a J'Aton Couture custom-made dress with Swarovski crystals. The whole wedding cost more than $10 million. 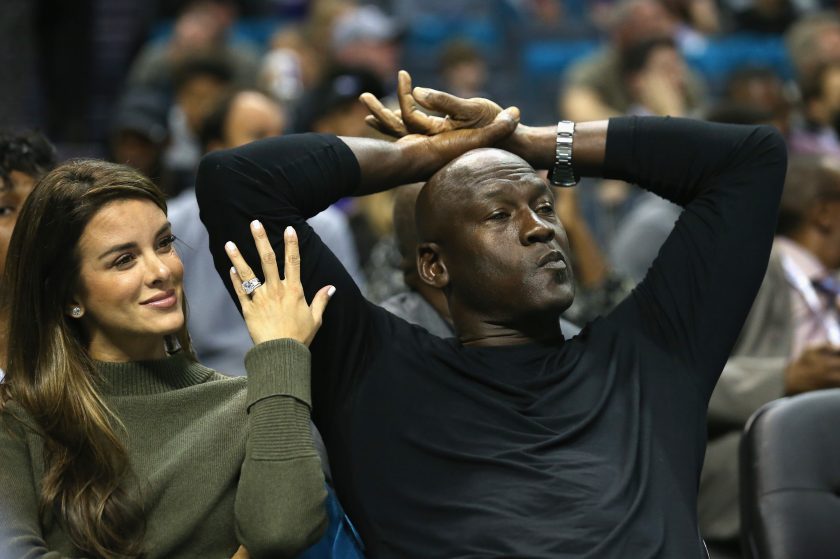 Jordan welcomed his fourth and fifth children with his second wife in 2014, when Yvette gave birth to identical twin daughters, Victoria and Ysabel Jordan. The Jordans keep their children's lives private and don't post any pictures of them on social media.

For the sake of NBA fans across the globe, let's hope they grow up to carry Jordan's name on the court.