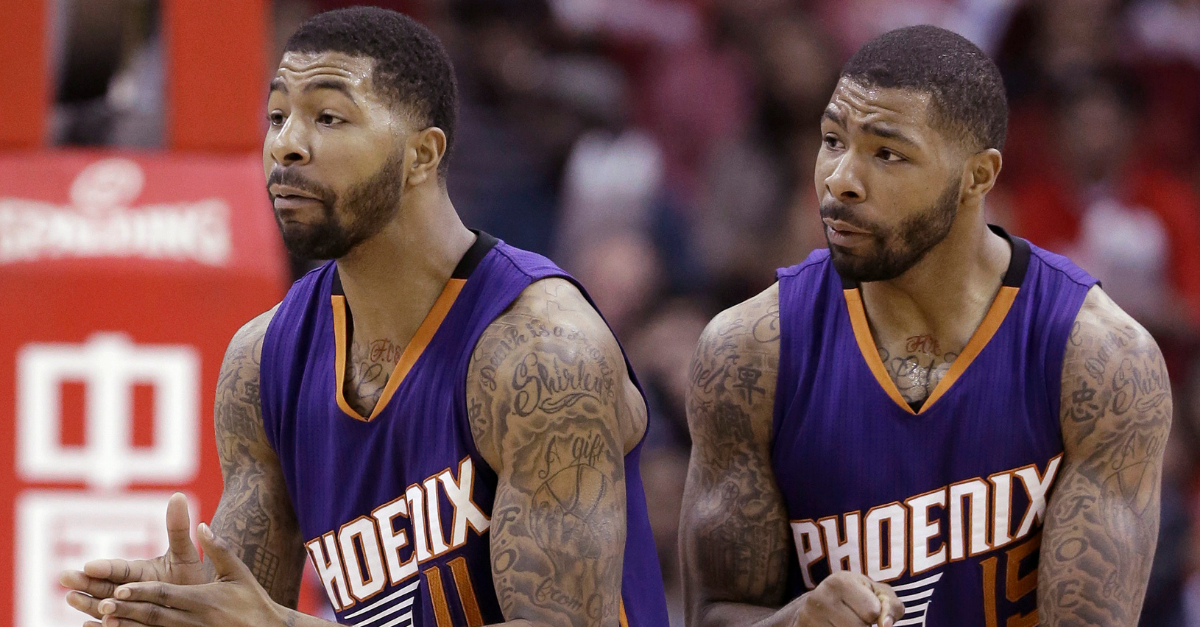 What would you do if you were an identical twin? Pull pranks on your friends? Trade test taking duties in high school? Switch places after being estranged for 11 years in a last ditch effort to get your parents back together?

The Morris twins have been inseparable for essentially their entire lives. They went to high school, played college basketball at the University of Kansas, and took all the same classes together.

They even went back-to-back in the 2011 NBA Draft when Markieff went 13th overall to the Phoenix Suns and Marcus went 14th to the Houston Rockets. For the first time in their lives, they would be separated.

According to USA Today Sports writer and KU alum Andrew Joseph, there are three ways to tell the brotherly NBA players apart:

— They have different shots

— Their tattoos aren’t exactly the same

Speaking on the tattoo differentiator, Joseph explains the minute details of the brothers’ F.O.E (Family Over Everything) tattoos at the base of their necks. (They also have the acronym on their left arm and several other parts of their bodies). He says:

“Marcus? is more compact while the ?E? in Markieff?s ?F.O.E.? drops off noticeably more than that of Marcus. Also, a cursive twirl on Markieff?s chest goes under the ?E? while it?s next to the ?E? on Marcus? tattoo.”

If you have a magnifying glass on your person, they’ll let you examine their necks so you can tell who is who if you ask politely.

This could’ve been handy for NBA officials during a 2017 playoff game when Markieff went down with an ankle injury. Two days later, he returned as good as new; and it was theorized that Marcus took the place of his twin brother.

As for their other ink, the twins share identical tattoos of the Philadelphia skyline, “Shirley” (the name of their grandmother), praying hands lifting a basketball to the heavens, and their last name on their right arms in addition to many others. Markieff has an “All Glory to God” tattoo on his right elbow that Marcus doesn’t.

The brothers reunited in Los Angeles, albeit for separate teams. Markieff Morris made stops with the Washington Wizards, Oklahoma City Thunder, and Detroit Pistons before signing with the Los Angeles Lakers in February 2020.

Marcus Morris teamed up with his brother in Phoenix for a brief period after a short stint with the Rockets. He then played for the Pistons, Boston Celtics, and New York Knicks before being traded to the Los Angeles Clippers at the 2020 trade deadline.

Markieff is teamed up with Anthony Davis and LeBron James in pursuit of an NBA title. Marcus and the Clips were bounced in the second round of the 2020 playoffs by the Denver Nuggets. Maybe Markieff is feeling generous and sharing the playoff success with Marcus.

The only way to know? Check the tattoos.

MORE: P.J. Tucker?s Sneaker Collection is Out of This World