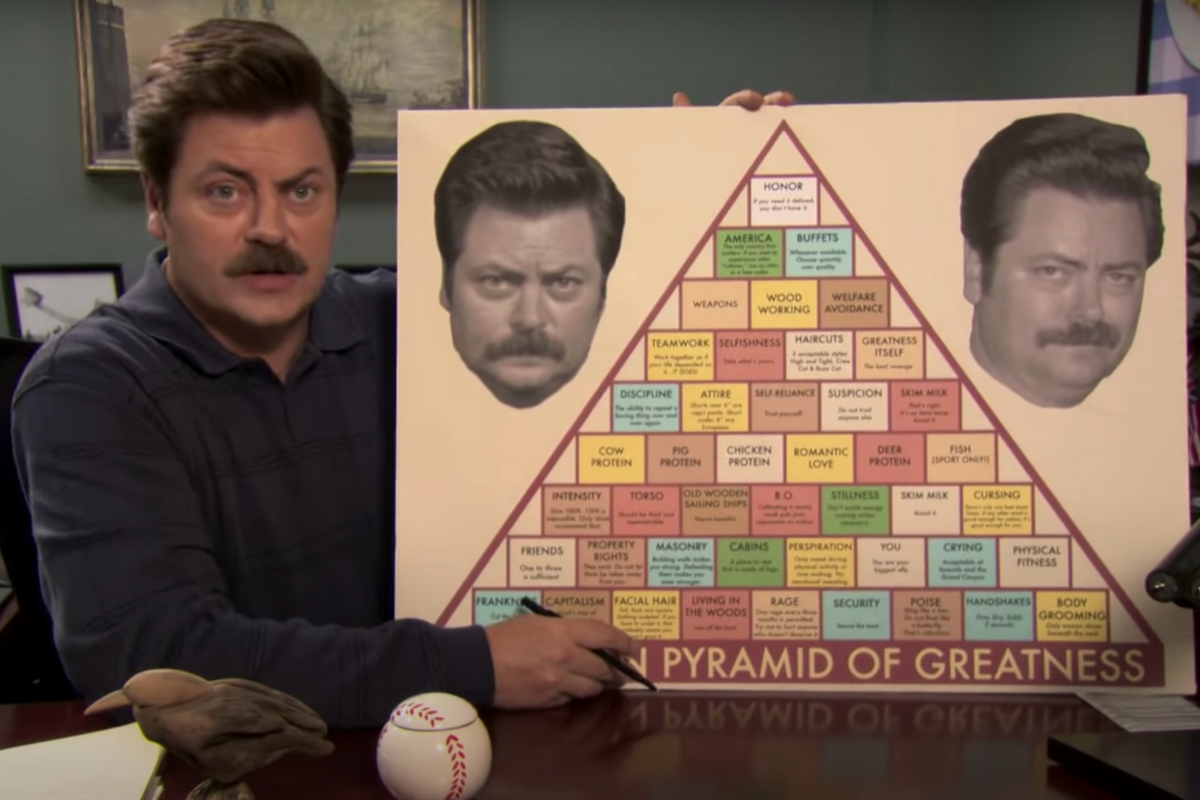 The food pyramid, the Great Pyramid of Giza, the pyramid scheme Kyle from high school tried to rope you into. (He’s driving a new Mercedes and promises you can make six figures. He wines and dines you at Chili’s. He orders the bloomin onion. Dang, this guy is good.

You only have to get two, yes TWO, people to commit and you’re set for life. Sorry, Kyle, it’s a no from me. I appreciate the notion. I can’t say no to a free meal from America’s favorite family restaurant and casual dining chain.)

When it comes to coaching, there’s only one pyramid that matters. It was created by Pawnee, Indiana’s most steadfast character.

The Ron Swanson Pyramid of Greatness

On NBC’s Parks and Recreation, Ron Swanson (played by Nick Offerman) is the show’s overarching paternal figure. He’s dead set in his ways, but respects differing personalities as long as you are honorable and good-hearted. His relationship with Leslie Knope (played by Amy Poehler) is a perfect example.

Swanson brings his beliefs to the basketball court when he and Andy Dwyer (played by Chris Pratt) are assigned to coach youth basketball teams in the Season 3 premiere “Go Big or Go Home.”

Andy’s team has the heart of champions. The gym is their playground, and if there’s one thing you can say about Andy’s team, it’s that they have an identity.

Ron ? appropriately dressed like Bob Knight ? is militant. His coaching philosophy is built entirely off his pyramid of greatness.

What is the pyramid of greatness you ask? It’s Ron’s recipe for maximum personal achievement.

Here are some of the highlights from the pyramid’s nine levels:

The pyramid’s entire construction can be found on Screen Rant.

Now that Parks and Rec is off Netflix, the old gang from the parks and recreation department lives on Peacock. Tom (played by Aziz Ansari), April (played by Aubrey Plaza), Ann (played by Rashida Jones), Donna (played by Retta), Chris (played by Rob Lowe), Ben (played by Adam Scott), and Jerry (played by Jim O’Heir) are always a good hang.

The pyramid is about building a program and doubles as a coachspeak thesaurus. That is if Ron actually talks.

MORE: ?Hoosiers? Hit Theaters 34 Years Ago. Where is the Cast Today?