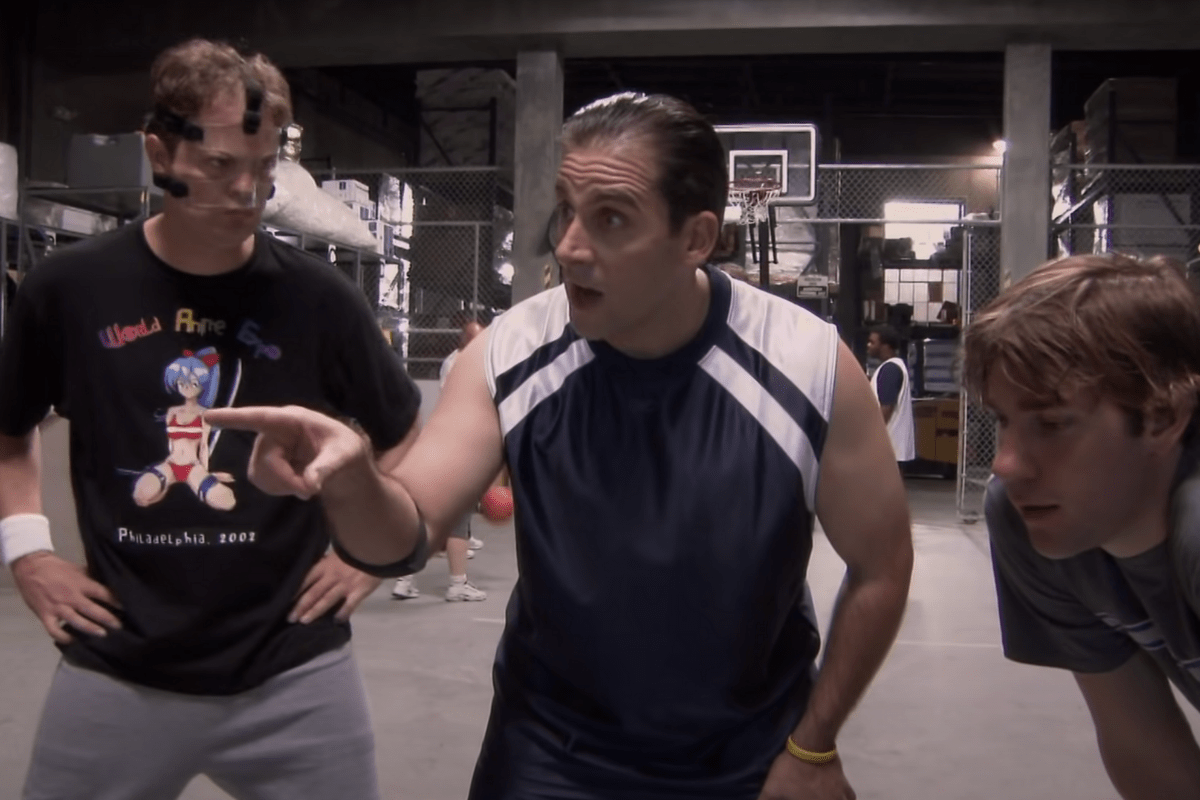 Football is rock and roll. Basketball is jazz.

In the fifth episode of the first season of NBC’s The Office, the upstairs Dunder Mifflin gang challenges the warehouse crew to a friendly game of basketball.

The stakes couldn’t be higher.

RELATED: Basketball Movies We Love to Watch, From Space Jam to Blue Chips

After having your ear drums and TV speakers blown out by the intro, the episode opens with regional manager Michael Scott (played by Steve Carell) giddy for the midday hoops game.

Back in the early days of the show, Michael was channeling his inner Pat Riley with slicked back hair. With each having a talent for managing, Michael does what all good leaders do and checks in on his star players Jim Halpert (played by John Krasinski) and Ryan Howard (played by B.J. Novak).

He fills out the starting five with himself, Stanley Hudson (played by Leslie David Baker), and reluctantly, Dwight Schrute (played by Rainn Wilson). Phyllis Lapin (played by Phyllis Smith) is the top option off the bench. Oscar Martinez (played by Oscar Nunez) volunteers his services but Michael shoots him down.

As Michael scouts the warehouse team, he toys with them. A mental chess warrior.

Eventually, with tensions mounting and corporate requiring workers to come in over the weekend, Michael bets warehouse foreman Darryl Philbin (played by Craig Robinson) that whoever wins has to work on Saturday. Daryl obliges.

Meanwhile, Jim, a former Scranton high school basketball player, laces them up while talking to Pam Beesly (played by Jenna Fischer) about their weekend plans. Pam is set to ride wave runners with her longtime fiance Roy (played by David Denman). Jim is going to the outlet mall.

The game tips off and it’s a back and forth match. The warehouse staff has chemistry on their side. They make the easy pass and feed feed their best player (Roy).

The office crew has leader of men in Michael Scott. He’s the guy who slaps the floor to show he’s locked in. He’s the guy who thinks three steps ahead by switching to a zone defense. Sure, Michael misses a few shots, but in fairness he usually makes those.

Cool guy Halpert pulls a few nifty moves and shoots Pam a “he can’t guard me” look in reference to her fiance (get a room). Dwight aka “Rip Hamilton” makes a few shots to the annoyance of Michael. Phyllis knocks in some buckets.

The game comes down to the wire and Michael calls a decisive flagrant foul. He ends the game and declares the office team winners since they were ahead.

The warehouse workers grill Michael about the unfairness. He concedes to the pressure—meaning the upstairs staff has to come in on Saturday.

Kevin Malone (played by Brian Baumgartner) drills consecutive jump shots after the game. Some may question Dwight, Phyllis, and Kevin’s lack of playing time. Michael is an intangibles guy. Heart, loyalty, and courage over everything.

The defeated office staff heads back upstairs. Michael assures them they don’t have to come in on Saturday because it probably wouldn’t prevent downsizing anyway. The man knows his team like the back of his hand.

The episode was directed by executive producer Greg Daniels. It’s a foundational piece early in the series as the TV show was finding its groove, is one of the highlights of season one, and lays the groundwork for future storylines. It’s the first time we really see the crew outside the main office.

Deleted scenes can be found on YouTube, with further dives by the Office Ladies podcast and The Ringer.

MORE: ‘Hoosiers’ Debuted 34 Years Ago. Where is the Cast Today?