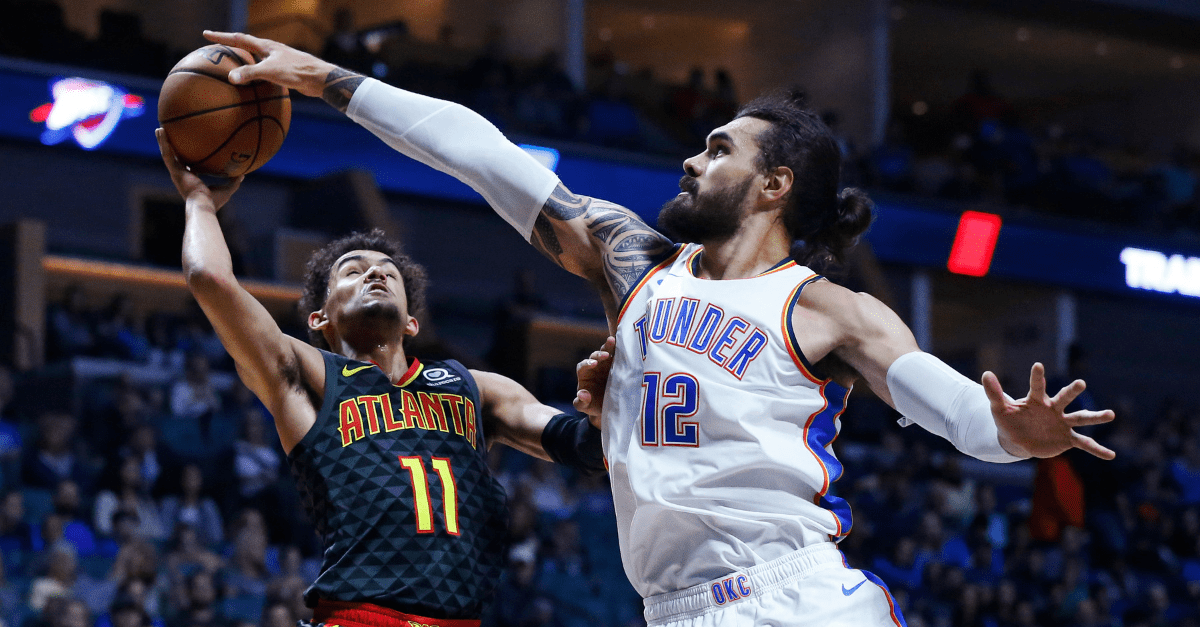 The days of the NBA’s powerful big men are slowly dwindling. Players like Detroit Pistons’ enforcer Bill Laimbeer and the Chicago Bulls’ Dennis Rodman have been effectively pushed out of the game with rule changes and officials calling for more fouls today than at any time over the past 30 years. Skill and speed is replacing power and physicality, but not everyone is taking that change to heart.

One of those players is Oklahoma City Thunder center Steven Adams. While he might look like a Game of Thrones character, the 26-year-old from Rotorua, New Zealand is developing into one of the best big men in the game while having a career-best year in 2019. Known for his toughness and durability, Adams is proving that the day’s of the NBA’s enforcer are far from over. I mean, you’d likely take on that identity if you were the youngest of 18 children, too.

Steven Funaki Adams was born on July 20, 1993 to an English father, Sid Adams, and a Tongan mother, Lilika Nguamo. Sid Adams was a member of the English Royal Navy and fathered his 18 children with five different women, although some say it’s actually 21 with six different women.

Adams’ siblings include older sister Valerie Adams, a three-time Olympian in the shot put for New Zealand. She was a two-time Olympic gold medalist in 2008 and 2012, then followed that with a silver medal in 2016. The four-time World Champion shot putter has earned 15 gold medals at major international competitions during her career. Also, Warren and Sid Jr., as well as four other brothers, all played professional basketball in New Zealand.

Adams remembered being severely bullied by his older brothers growing up and his only defense was to cry. That would ultimately bring his Dad into the picture to help save him. Over time though, Adams’ bond with his 17 siblings grew even tighter.

Steven Adams was born when his father was in his 60s, and Sid died after a battle with stomach cancer in 2006 when his youngest son was only 13 years old. After his father’s death, Adams began getting into trouble and skipping school. He later became involved with the Mongrel Mob, an organized street gang in New Zealand with more than thirty chapters across the country. Before he officially joined, his older brother Warren stepped in to right the ship.

One of Warren’s old teammates in New Zealand’s pro league, an American named Kenny McFadden, established the New Zealand Basketball Academy in nearby Wellington. There, McFadden worked with Adams early in the mornings and helped get him into Scots College, a Presbyterian boarding school. Standing 6-foot-5 at 14 years old, Adams would begin to learn the game of basketball in a stable environment despite it being almost six hours away from his family life.

“I just got addicted to getting better. My coach gave me a goal to get a tip dunk in a game ? you know a putback dunk off a rebound. I had never done that. He told me that he’d get me a pair of new shoes if I did it. I just kept trying. I couldn’t get it, couldn’t get it, couldn’t get it. It took me a year or so. Finally one game, I got it. It happened. I was really pumped, I felt really good. When it finally happened, I didn’t care about the shoes. From there, I got addicted to that success, that accomplishment.”

Adams impressed enough people to earn an invite to the adidas Nations Tournament, a basketball camp in Los Angeles for international prospects. There, he would lead all players by averaging 22.0 points and 16.8 rebounds. After one postgraduate season at Notre Dame Preparatory School in Fitchburg, Massachusetts, he began to draw attention from college basketball teams, but only one ended up being the right fit.

McFadden was longtime friends with Jamie Dixon, who was the head basketball coach at the University of Pittsburgh at the time. After several recruiting trips, Adams had found his new home in Pennsylvania as a consensus top-10 high school basketball player.

During his only season with the Pitt Panthers, Adams’ reputation as a two-way player and tenacious rebounder took the national stage. “Kid Kiwi” started 32 games, helped Pittsburgh reach the NCAA Tournament, and was named to the Big East All-Rookie Team. Adams left college after one season for his next hurdle in the NBA. There, the OKC Thunder selected Adams with the 12th overall pick in the first round of the 2013 NBA Draft.

As a rookie, Adams averaged less than 15 minutes but played in 81 games as OKC and the since-departed Kevin Durant would ultimately lose to the San Antonio Spurs in the Western Conference Finals. Since then, Adams is only getting better.

Through his first six NBA seasons with OKC, Adams played in 403 of a possible 467 regular season games, and became Oklahoma City’s full-time starter at center in his second year. Adams improved his point, rebound and assist averages every season, as well as playing more than 30 minutes per game for the first time in the 2017-18 season.

In 2016, Adams signed a four-year, $100-million contract with Oklahoma City. Alongside point guard Russell Westbrook and swingman Paul George, the trio have established the Thunder as an elite squad in the NBA’s Western Conference built around their powerful enforcer at center.

Not bad for a guy that didn’t take basketball seriously until 10 years ago, huh? Need more evidence of Adams’ claim to the top of the NBA’s tough guy list? During the first round of the 2018 NBA Playoffs against the Utah Jazz, Adams put snapped his own broken nose back into place.

At 27 years old, the New Zealander had a career year for the Thunder in 2019 and showed no signs of slowing down to start 2020. Adams’ time in Oklahoma City may be coming to an end, however, as he’s been the subject of NBA trade rumors as the Thunder prepare to rebuild without Russell Westbrook in their long-term plans.

He may have had a rough upbringing in New Zealand, traveled six hours away from his home and family as a middle school kid, trekked 8,500 miles to play college basketball, and landed in one of the NBA’s smallest markets, but Adams is built to last in the NBA.

In 2018, the 7-foot, 265-pound center was voted the NBA’s toughest player by the league’s general managers. What did Adams think of the honor?

“Do I get anything? Do I win? Do I get a bonus? That?ll be sick! I don?t know. Toughness? It seems dumb,” Adams said with a chuckle. “It seems like a weird thing to poll. Guys are just bored, I think.”

Just another day in the life of the NBA’s toughest enforcer.

This article was originally published January 25, 2019.

MORE: The Golden State Warriors’ Championship Rings Were Made for a King