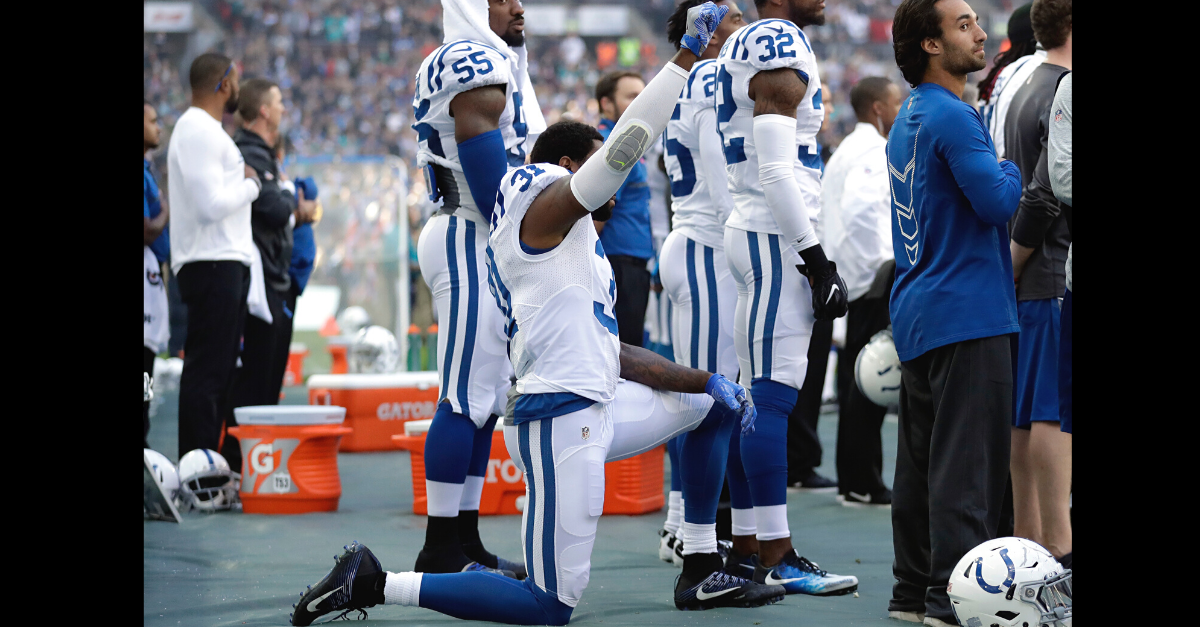 Former NFL cornerback Antonio Cromartie was one of the league’s elite defenders. In his prime, Cromartie went to three-straight Pro Bowls ? two with the New York Jets and one with the Arizona Cardinals. Back in his second season, the 19th overall pick of the 2006 NFL Draft recorded a league-high 10 interceptions, made the Pro Bowl, and earned First-Team All-Pro honors. However, a sharp decline in production led him to the Indianapolis Colts, where the Florida State Seminoles standout was cut just four games into the 2016 season.

At 32 years old, Cromartie’s production dropped off tremendously. When he was cut by Indianapolis, the 6-foot-2 defender hadn’t picked off a pass in almost two years. The game caught up with the speedster, and Cromartie was out of football for good.

However, in a recent interview with Master Tesfatsion and Bleacher Report’s “Untold Stories” segment, Cromartie paints a very different picture about why he was cut, and he claims it had nothing to do with his on-field performance.

In case you were living under a rock, that 2016 season brought the NFL’s national anthem protests to the forefront. Cromartie was one of many players, coaches and fans who took a knee in solidarity with former San Francisco 49ers quarterback Colin Kaepernick to protest racial injustice and police brutality.

According to Cromartie, former Colts head coach Chuck Pagano told his team not to take a knee. The NFL veteran responded to his teammate by saying, “When it’s about leukemia and [Pagano’s] cancer, it’s cool. But when it’s about police brutality and social injustice, it’s not cool?”

Cromartie says he took time to speak with his grandfather, an ex-Marine, as well as family members in the army before he first took a knee during Week 4 of the 2016 season against the San Diego Chargers. At that point, Cromartie says several executives, including an equipment manager who was holding a towel, tried to block his protest. That didn’t stop him, nor did it slow down his fire inside after coaches urged him the following week not to protest a second time.

Cromartie says the next week, Pagano called Cromartie into his office, took his playbook, and told him he was being cut because “our guys are getting healthy.”

Although it was never explicitly said, the defensive back today believes he was released, and his football career subsequently ended, not because of a football decision, but rather because he took a knee.

It's crazy that today marks a year since I was cut, for taking a stand For social and racial injustice, inequality and police brutality. Football has been apart of my life for 28 years and I still have some hope of still playing a couple more years. Being home this past year has really made me grow as a man and a father. I have gotten a chance to see my kids grow up and spend time with them. And really have grown with my wife and to see some of the struggles she has raising our kids with going to activités coming home cooking and I have say it's exhausting. Don't know whats God plan is but I have to trust it because it's the best. Sometimes we have to sit back and watch and see what people really think of us. Know your worth please. Don't let anyone tell you what you are worth. #teamcromartie #crosnest #TeamGod

Does Cromartie regret his decision to protest during the national anthem?

“Nope,” he said. “Don’t regret it at all. Why should I? Because at the end of the day, only thing we did was give people a voice that didn’t have a voice, and it brought more attention to what really was going on. Now, everyone’s talking about it.”

The four-time Pro Bowler, who famously fathered 14 children with several different women, likely wouldn’t be defined by how his career ended. But with this admission, it’s another opportunity for him to clear his name and, once again, shine a light on the now-forgotten national anthem protests.

This article was originally published October 30, 2019.