Is Jared Goff Really Worth $110 Million Guaranteed? The Rams Think So 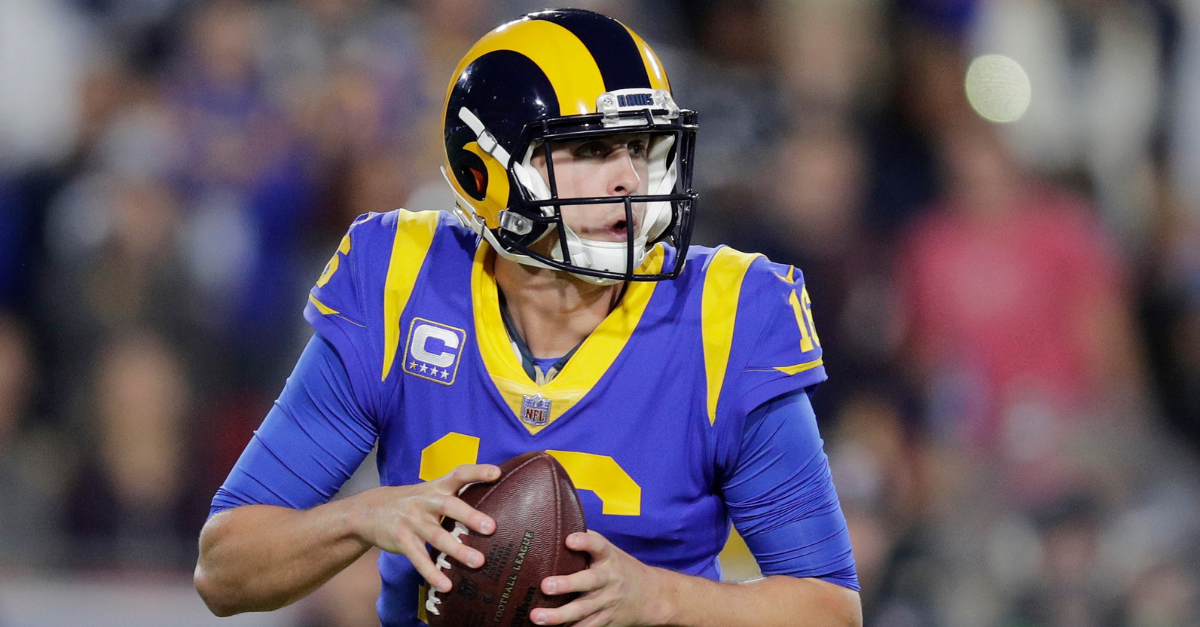 LOS ANGELES (AP) — Jared Goff has been a prolific NFL quarterback ever since Sean McVay joined him with the Los Angeles Rams. The quarterback and his coach will get the chance to chase more Super Bowl appearances together now that Goff’s long-term future is finally secure.

Goff agreed to a four-year contract extension with the Rams on Tuesday night, keeping the franchise quarterback with Los Angeles through the 2024 season.

The team didn’t disclose the terms of its deal with Goff, who led the Rams to the Super Bowl last season. NFL Network reported the deal is worth $134 million, with a league-record guarantee of $110 million.

Goff is beginning his fourth year with the Rams, who made him the No. 1 overall pick in the 2016 draft. After a rocky start as a rookie during the Rams’ relocation season, Goff has become a sturdy two-time Pro Bowl selection under McVay over the past two years.

Goff has passed for 8,492 yards with 60 touchdowns and 19 interceptions while going 24-7 in 31 regular-season games as McVay’s starter. He has led the Rams to back-to-back NFC West titles and their first Super Bowl appearance in 17 years, becoming the first No. 1 pick to quarterback his team to a Super Bowl within his first three seasons.

He also led the Rams to two playoff victories last winter, but he struggled along with his teammates in the Super Bowl, going 19 of 38 for 229 yards with one interception in Los Angeles’ 13-3 loss.

Although the Rams flopped against New England, the team’s belief in Goff never wavered. McVay and Rams general manager Les Snead repeatedly vowed to sign Goff to a long-term extension, expressing constant support for the quarterback who has run McVay’s inventive offense during two of the highest-scoring seasons in NFL history.

McVay has repeatedly hit back at suggestions that Goff is a system quarterback, with his success due to the inventiveness of McVay’s schemes.

From our @NFLGameDay Season Preview: The #Rams locked up QB Jared Goff, long-term, with a $134M extension, the #Cowboys are still waiting to close the Zeke Elliott deal, and the #Chargers and RB Melvin Gordon are in the opposite situation. pic.twitter.com/9JgA0cyWS5

“He makes the system what it is,” McVay said last month. “We are able to do the things we are because we have the right trigger man that can really do anything that we ask in terms of changing the launch point, what types of concepts we want to activate, whether it be play-action, the dropback game, quick, intermediate or down the field.

“He’s a special player. I think his production speaks for itself. I know I don’t want anybody else to be our quarterback.”

Goff has had games of exceptional brilliance during his two seasons with McVay, including an epic 465-yard, five-touchdown performance against Minnesota and a 413-yard, four-TD effort in LA’s memorable 54-51 Monday night victory over Kansas City. He also had a few tough games down the stretch last season while the Rams coasted toward the playoffs, but picked up his production with a solid 297-yard effort in the NFC championship game against New Orleans.

Goff doesn’t turn 25 until October, and he has been humble about his abilities and expectations despite finishing fourth in the NFL with 4,688 yards passing last year.

Even after Carson Wentz, the No. 2 pick behind Goff in the 2016 draft, got a $128 million extension from the Eagles in June, Goff said he had no concerns about entering his fourth season without a new deal.

Now he won’t have to.

The Rams have tied up the most important elements of their NFC-winning core over the past year. Running back Todd Gurley, defensive lineman Aaron Donald and receiver Brandin Cooks agreed to lucrative long-term deals last year, while McVay and Snead both agreed to contract extensions less than two months ago.

All six men are tied to Los Angeles through at least the 2023 season. The biggest pieces are firmly in place for the Rams to be a contender next year when they open their palatial, multibillion-dollar stadium complex in Inglewood.

The Rams open the regular season at Carolina on Sunday. Goff didn’t play at all in the preseason, in keeping with McVay’s preference to keep most of his starters completely out of action in games that don’t count.