Man, I miss workhorse running backs. Today's NFL consists of wide open offenses, passing attacks spearheaded by big-armed quarterbacks like Patrick Mahomes and Aaron Rodgers, and supplemented by (the least favorite phrase of every ball carrier) the running back by committee.

But I grew up watching football during the 2000s when some of the greatest runners in the game blossomed.

I'd do a disservice to the position if I didn't shoutout some of the greatest backs ever, who paved the way for that generation. Emmitt Smith, Barry Sanders and Thurman Thomas ran through the 1990s. Icons like Jerome Bettis, Marshall Faulk and Curtis Martin could easily rank in two decades, but they launched their careers in the early 90s. From Eric Dickerson and Walter Payton in the '80s to Larry Csonka and Jim Brown before them, running backs were the centerpiece for decades of championship teams.

Adrian Peterson, Frank Gore, Marshawn Lynch, Chris Johnson and Jamaal Charles are some of the greatest, but they're remembered as running backs who defined the 2010s.

But the early 2000s? What a time to be a running back. Not only was carrying the ball vital to moving the sticks, but running backs became key pass-catchers as the game developed. One-trick ponies were being replaced with do-it-all players, and some of my favorite players ever came from his era.

Here is my list of the 10 greatest running backs of the 2000s. Everyone on this list played the bulk of their career between 2000 and 2009, and each one was more fun than the next to use against your friends in Madden. 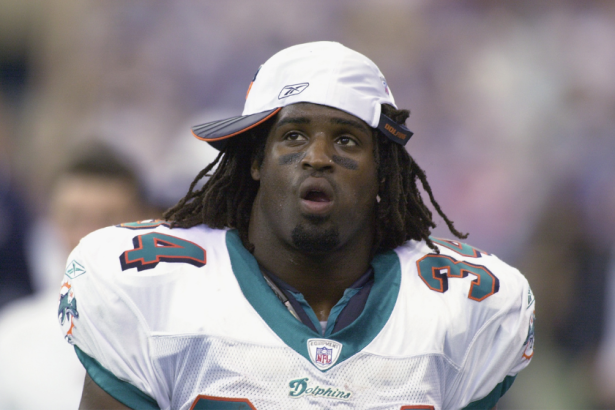 Say what you will about Williams' off-the-field issues, but few runners in NFL history were as talented as the 1998 Heisman Trophy winner from Texas. The only proof I need to back up that statement is recalling how Hall of Fame head coach Mike Ditka traded every pick the New Orleans Saints had in the 1999 NFL Draft, plus a first and third the following year, just to get this guy.

On the field, he dominated. Five 1,000-yard seasons this decade was highlighted by his All-Pro 2002 season with the Miami Dolphins when he went off for 1,853 yards. After testing positive for marijuana in 2004, retiring, coming back, then getting suspended for the 2006 season, Williams had a resurgence in 2009 when Miami brought the "Wildcat" package to life. Williams finished the decade in 2009 with 1,385 total yards and 13 TDs at 32 years old. 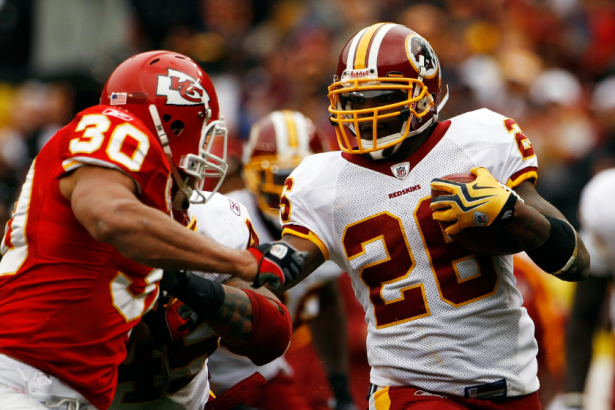 He drank Hennessy before games, but you're kidding yourself if you thought I was leaving Portis off this list.

In his first season with the Denver Broncos, Portis set the franchise rushing record with 1,508 yards, then followed followed that up with another 1,500-yard campaign. He was traded to the Washington Redskins for Hall-of-Fame cornerback Champ Bailey AND a second-round pick the next year but didn't slow down the Redskins. He'd eclipse 1,200 yards four times and made his second Pro Bowl in 2008.

Portis retired after a nine-year career at age 29, later citing concussions as his downfall, finishing just 77 yards shy of the 10,000 career yardage mark. 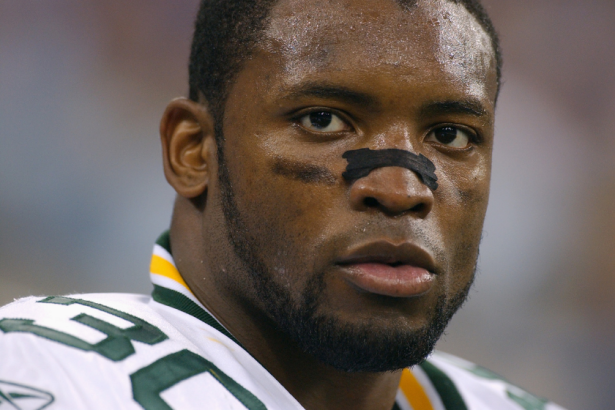 Green was a major cog on Nebraska's national championship teams in 1995 and 1997 before his NFL career. In 2000, Green was traded from the Seattle Seahawks to the Green Bay Packers, and subsequently went to four-straight Pro Bowls from 2001-04, including being named NFC Offensive Player of the Year in 2003. Green was a monster alongside Brett Favre, accounting for at least 1,400 total yards six times in seven years.

After signing a free agent deal with the Houston Texans in 2007, Green's production fell off. He would return to Green Bay for one season in 2009, when he broke Jim Taylor's franchise record as the Packers' all-time leading rusher. Green was inducted into the Green Bay Packers Hall of Fame in 2014. 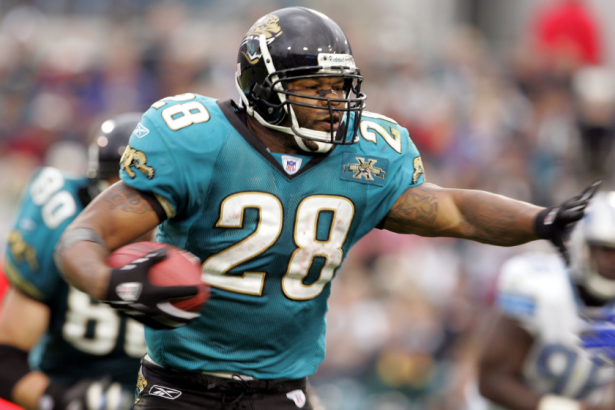 The first round of the 1998 NFL Draft was loaded with All-Pro talent. Peyton Manning went first overall, Charles Woodson went fourth, linebacking legends Keith Brooking and Takeo Spikes went back-to-back at 12 and 13, respectively. Even the great Randy Moss was there at No. 21 to the Minnesota Vikings. But with the ninth-overall pick, the Jacksonville Jaguars traded up to get Florida Gators running back Fred Taylor, and it paid off big time.

Taylor scored a career-high 17 touchdowns in 1998, then blossomed into one of the game's best runners. Six times he'd eclipse 1,000 rushing yards during the 2000s. Injuries slowed Taylor down for stretches of his career, but the emergence of Maurice Jones-Drew in 2006 gave him new life, as he'd reach his only Pro Bowl in 2007 when the backfield pair combined for 2,435 yards from scrimmage. Taylor is one of only seven backs with at least 2,000 carries that decade, solidifying him as a legend in my book. 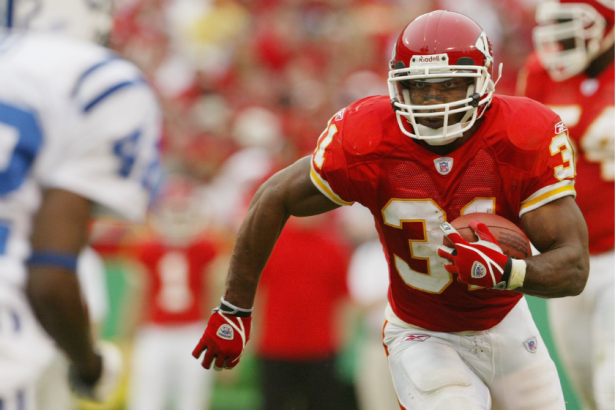 Three NFL running backs have reached 2,100 total yards from scrimmage in three different seasons. One of them you'll meet later on this list, one is the great Marshall Faulk and the other is Priest Holmes.

From 2001-03, the Kansas City Chiefs star was unstoppable. He was First-Team All-Pro all three seasons. Between 2002-03, he put up the most rushing touchdowns ever in a two-year span (48). In 2004, Holmes had 14 touchdown runs through eight games before a season-ending injury. The following year, a severe spinal column injury threatened to end his career. A whirlwind of rehabilitation and medical visits allowed him to log just 46 more carries in 2007 before he was forced to retire.

Had Holmes stayed healthy longer, we could've witnessed the single greatest run by a player in NFL history. 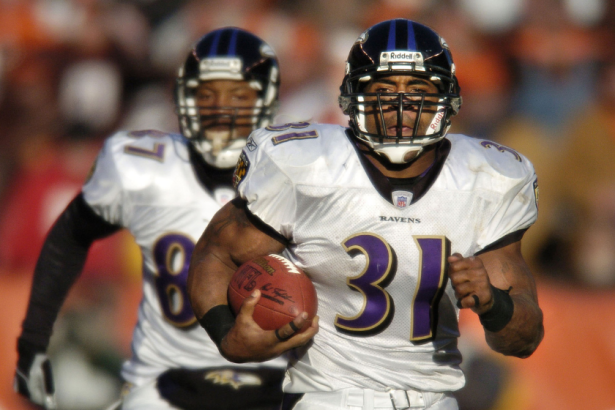 Want to talk about making an entrance? During his rookie season, the former Tennessee Volunteer ran for 1,364 yards, helped the Baltimore Ravens win Super Bowl XXXV with his 100-yard performance, and became the youngest player (21) to score a touchdown in The Big Game.

After missing 2001 with a knee injury, Lewis had his best season in 2003 when he ran for 2,066 rushing yards--still the third-most in league history--and a career-high 14 rushing touchdowns. He was named First-Team All-Pro, NFL Offensive Player of the Year, and went on to become a member of the NFL's 2000s All-Decade Team. Lewis never matched his numbers of 2003, nor was he a major threat catching the football, but seven 1,000-yard seasons in his nine active years is pretty damn impressive. 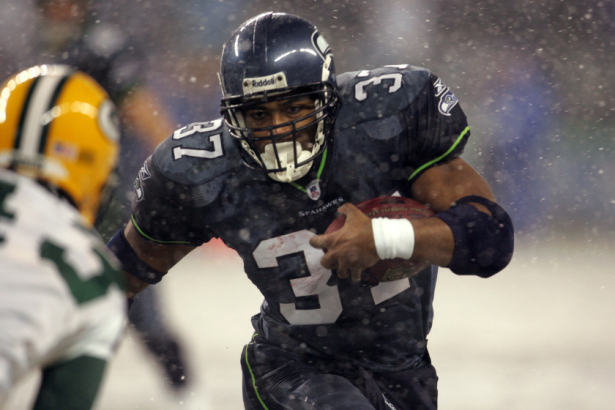 No one could stop Shaun Alexander. The All-American at Alabama was drafted at No. 19 by the Seattle Seahawks in 2000, but sat behind veteran Ricky Watters his first year. He ascended to the starting role in year two, and he never looked back.

Alexander seemed to get better and better every season until his crowning moment in 2005. At 28 years old, he led the league with 370 carries for 1,880 yards, set the single-season record with 27 touchdown runs and was named the NFL's Most Valuable Player. Alexander was rewarded with an eight-year, $62 million contract, but fell victim to hand and foot injuries the next two years. He was cut prior to the 2008 season, appeared in four games that year for the Washington Redskins, and ultimately retired.

He's one of nine backs in NFL history with 9,000 career rushing yards and 100 touchdown runs. 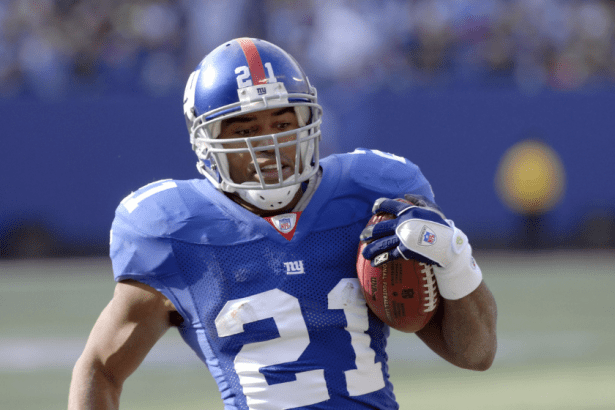 Much like the great Barry Sanders, New York Giants running back Tiki Barber retired in his prime. Coming off 1,662 rushing yards in 2006--the fifth-straight season he'd eclipsed 1,200 yards on the ground--Barber chose to hang up his cleats and pursue a broadcasting career.

But boy, Tiki was an all-time great.

A two-tool weapon, Barber joined Marcus Allen and Marshall Faulk as the only running backs to reach 10,000 rushing yards and 5,000 receiving yards in their career. From 2000-06, Barber averaged 122.2 yards from scrimmage per game and reached the Pro Bowl three-straight seasons leading into his retirement. Had he stayed on the field longer, a lot more records could've been broken, and we may have remembered Tiki as arguably the greatest two-tool running back in league history. 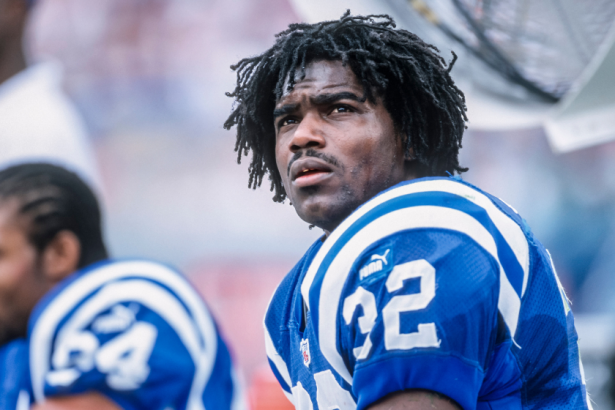 A member of the Pro Football Hall of Fame Class of 2020, the 1999 Offensive Rookie of the Year burst on the scene, leading the NFL in rushing each of his first two seasons before tearing his ACL mid-way through 2001. It took almost two years to regain his form, but James blossomed with the Colts in the early 2000s.

James ran for 4,313 in three seasons from 2003-05 before heading to the Arizona Cardinals as a free agent. In the desert, James put up back-to-back 1,000-yard seasons before a family crisis changed everything.

The mother of James' children died of cancer in April 2009, after which he asked the Cardinals for his release. James appeared in seven games with the Seahawks before retiring from the NFL.

Few people deserve the Hall of Fame quite like James, but everyone on this list pales in comparison to the greatest running back of the 2000s. 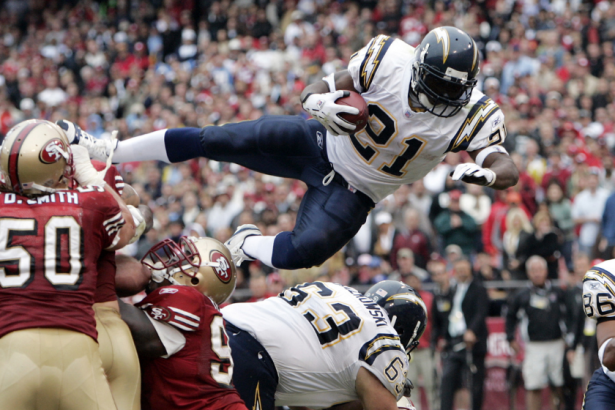 Photo by Robert B. Stanton/NFLPhotoLibrary

He set the FBS single game record with 406 rushing yards at TCU. Twice he led major college football in rushing yards. He's a College Football Hall of Fame inductee, and "LT" is easily my favorite running back to ever play in the National Football League.

The San Diego Chargers selected him fifth overall in 2001, and that was probably too low. Tomlinson averaged over 1,900 yards from scrimmage and 17 total TDs in each of his first nine seasons, including an NFL-record 28 rushing touchdowns and 31 total scores in 2006. The five-time Pro Bowl selection was named NFL MVP that year, as well as Walter Payton NFL Man of the Year for his work off the field, and was inducted into the Pro Football Hall of Fame in 2017.

And just to show how many iconic running backs shined in this decade, here's are the best of the rest in my book.

MORE: The Worst Quarterbacks in NFL History Were Painful to Watch