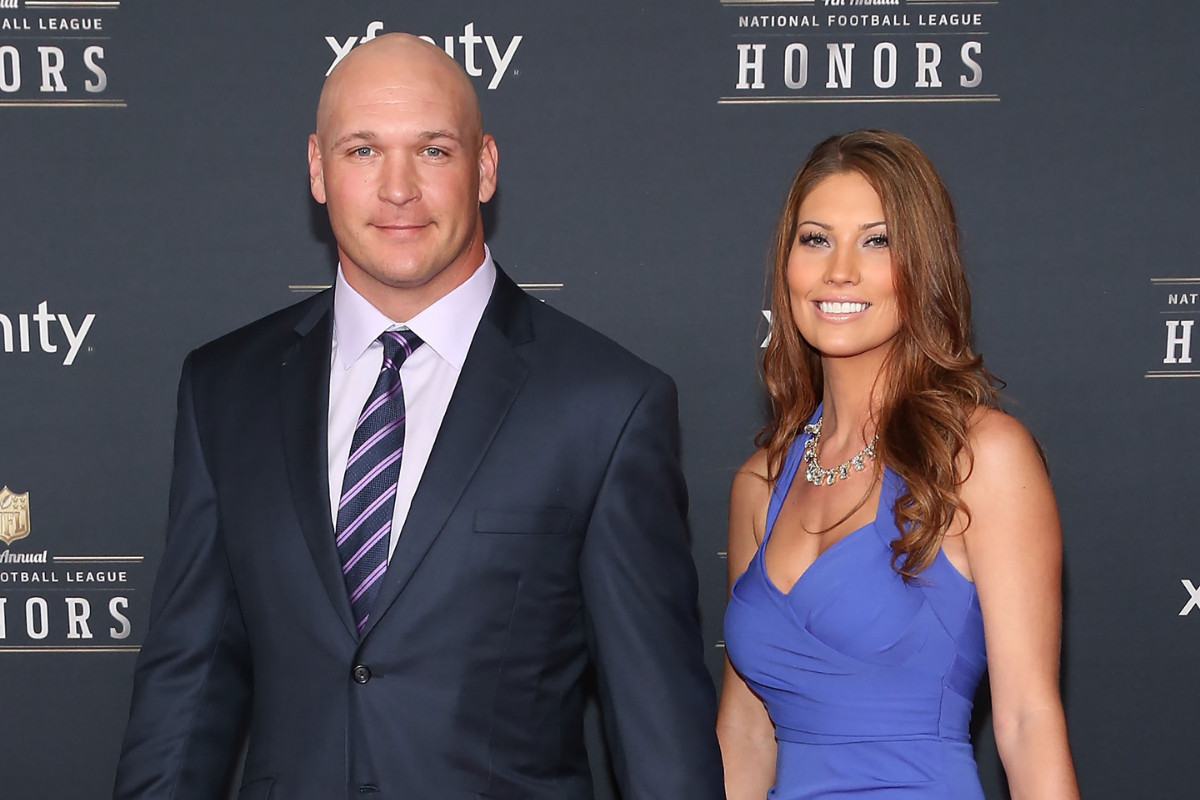 Former Chicago Bears linebacker Brian Urlacher is one of the greatest defensive players in NFL history and spent his entire 13-year career in the Windy City.

The Pro Football Hall of Fame linebacker hung up the cleats in 2012 with eight Pro Bowls, an NFL Defensive Player of the Year Award, four First-Team All-Pro selections and an NFL Rookie of the Year Award to his name.

Urlacher’s status as a superstar made him quite the bachelor, but he settled down and married his lovely wife Jennipher Frost.

Who is Brian Urlacher’s Wife?

RELATED: Brian Urlacher Has Hair Now, And He Looks So Different

Brian Urlacher has been married to model Jennipher Frost since 2016. The pair tied the knot at a ceremony in Queen Creek, Arizona.

Frost is a former contestant on America’s Next Top Model, and had a brief career in modeling after her stint on the show.

The happy couple doesn’t have any children together, though Frost is the stepmother to three of Urlacher’s children from previous relationships: daughters Pamela and Riley Urlacher, and son Kennedy.

Prior to his marriage to Frost, Brian Urlacher was married to ex-wife Laurie Urlacher from 2000-2004, with whom he had his two daughters.

Additionally, he was also in a relationship with Tyna Robertson, with whom he shares joint-custody of their son, Kennedy.

In 2017, the former football player appealed to a Cook County court for complete custody of his son after Robertson’s husband Ryan Karageorge was found dead in their residence, according to the Chicago Tribune.

Urlacher also dated actress Jenny McCarthy before he settled down with Frost.

Brian Urlacher was born to parents Bradley and Lavoyda Urlacher, and spent his early life in Pasco, Washington alongside his younger brother Casey.

He attended Lovington High School before playing college football for the University of New Mexico Lobos.

His tremendous college career saw him get selected with the ninth-overall pick in the 2000 NFL Draft by the Chicago Bears.

He was a star in the National Football League and appeared in the Super Bowl in 2006. Urlacher also played in seven playoff games throughout his professional career.

Urlacher earned a handful of endorsement deals during his playing days, including Nike, McDonalds, Old Spice, and Vitamin Water.

“The social media posts in no way reflect the values or opinions of the Chicago Bears organization.”

Bears distance themselves after Brian Urlacher posts racially insensitive response on Instagram to the police shooting of Jacob Blake pic.twitter.com/uhz0ZreNfX

Life for the former American football linebacker has been somewhat controversial after retiring.

Brian Urlacher got into some hot water after making some questionable comments on social media, calling out NBA players for boycotting playoff games following the shooting of Jacob Blake and citing the fact that Green Bay Packers quarterback Brett Favre played a Monday Night Football game the day after his own father died.

Urlacher, in a since-deleted post, said “NBA players boycott the playoffs because a dude reaching for a knife, wanted on a felony sexual assault warrant, was shot by police.”

He worked as an analyst for Fox Sports after his football career and continued to build up his net worth, which is estimated at roughly $16 million.

MORE: Kurt Warner’s Wife is a Former Marine With a Tragic Past