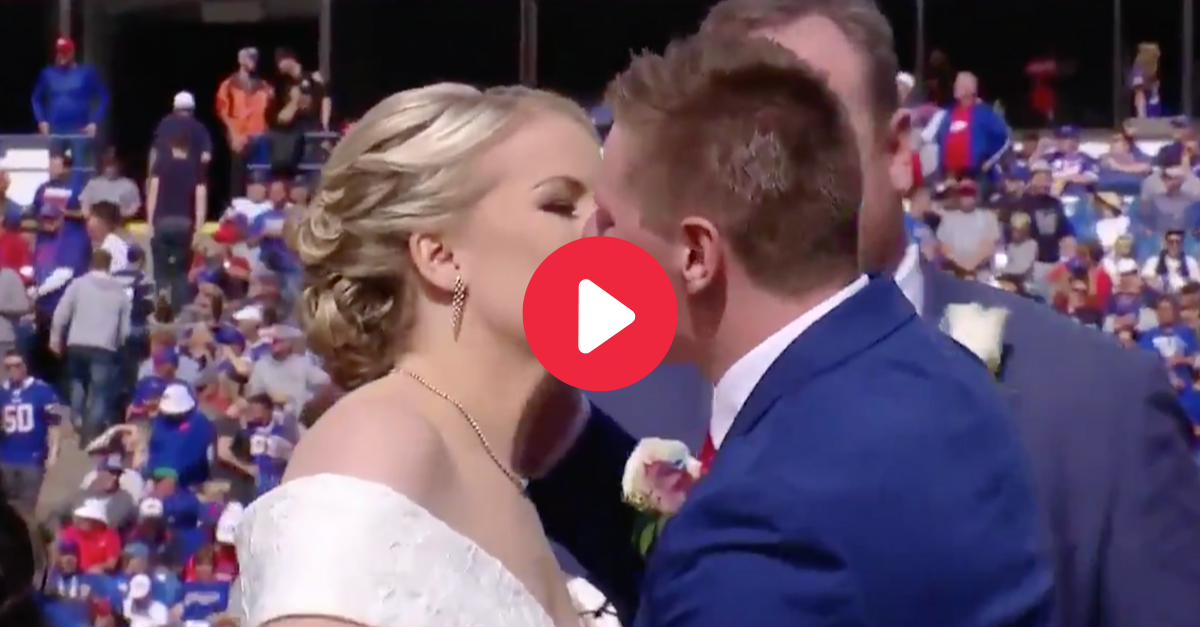 Oh, the Buffalo Bills, what would we ever do without you? We already know you get crazy at tailgates, throw sex toys on the field, and have one of the most passionate fan bases in the entire NFL, but you have now taken it to a completely different level. A wedding a New Era Field? Say it isn?t so!

It?s no secret Bills Mafia hates the New England Patriots. A lot of people do, but not quite like the Bills. The September 29 game was likely circled the moment the NFL schedule released, and the organization is tried to lighten the hate up with a soppy wedding at halftime on the 50-yard line during the team?s Fantennial weekend.

That?s right, the Buffalo Bills offered a ?Halftime Wedding Experience of a Lifetime? contest for one lucky couple at the Orchard Park, New York stadium, and it actually happened.

For many fans, the Bills game didn’t go as well as they wanted. Quarterback Josh Allen got hurt after throwing three interceptions, Matt Barkley also threw a pick, and Tom Brady and the Patriots escaped with a 16-10 victory.

That definitely didn’t stop Mackenzie Park and Jordan Binggeli from getting married in front of over 70,000 people at halftime.

A couple got married during halftime at the Bills game 💒

Story to tell for a lifetime.

This was not your typical wedding, by any means, but it’s the Bills we are talking about here. Mackenzie Park and Jordan Binggeli getting hitched was the only thing normal about it.

Former quarterback Jim Kelly, who led the franchise to four Super Bowls, gave away the bride, with a Bills jersey around his other arm. Former Bills defensive tackle Kyle Williams was the officiant.

We're hosting a wedding. At halftime. On the 50-yard line.

And it could be YOU getting married!

The happy couple had their first date at New Era Field, and Jordan proposed to Mackenzie there, too. It was only fitting to get married at midfield during halftime of the Bills-Patriots game, with a bunch of Bills legends as wedding guests, and Bills Mafia as witnesses.

This a game day and NFL week this winning couple will remember for the rest of their lives. It started as an interesting concept for the Buffalo Bills and Reeds Jenss to partner up on, but it ended up being a big touchdown.

The only question left is who caught the wedding garter?