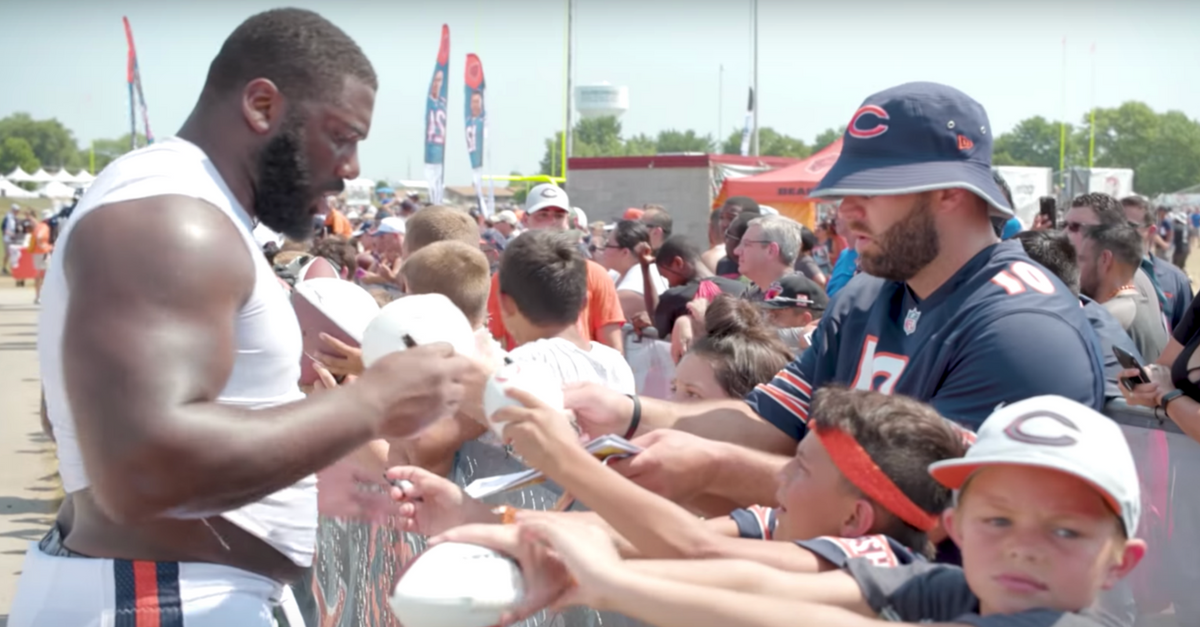 If there is any NFL player living his best life right now, it would have to be Chase Daniel. The Chicago Bears backup quarterback has banked $24.3 million to wear a headset and throw just 78 total passes entering his 10th season in the league. He might have just played his best game as a professional ever, too.

Sadly, despite playing a larger-than-normal role in two preseason games already this summer, the veteran signal caller?s performance was not on the gridiron.

Daniel, the former Missouri star and Bears No. 2 quarterback, went undercover with a Mitchell Trubisky jersey on and tricked his teammates for autographs during training camp.

?I saw a bucket hat laying around. I said ?What else is there to wear at camp on a sunny day than a nice little bucket hat??? Daniel said. ?Got some Nike shades on, put the Mitch jersey on and just rolled.?

At first, Daniel was a little hesitant to pull the prank, according to the Bears, but everyone sure is glad he went through with it.

The entire video is priceless.

From some teammates being completely oblivious to others recognizing him to Trubisky losing it once he figures it out, there isn?t a dull moment.

You should’ve seen the looks on the parents faces when I was cutting their kids in line. 😂😂😂 https://t.co/r4q2kwPcvh

Daniel, who has backed up the likes of Drew Brees and Alex Smith in his career after entering the NFL as an undrafted free agent in 2009, even went on The Dan Patrick Show to talk about it.

.@ChicagoBears QB @ChaseDaniel talks going under cover at Bears training camp to get autographs from his own teammates + life as a backup in the #NFL pic.twitter.com/ZUcjGBw8xz

Yes, life is good for Daniel, who joined the Bears this offseason, although he hasn?t exactly been stellar during preseason losses to the Baltimore Ravens and Cincinnati Bengals.

The 31-year-old completed 8 of 16 passes for 53 yards with one touchdown and two interceptions in last week?s Hall of Fame Game, and then went 8-for-12 for 76 yards with an interception Thursday against the Bengals.

Daniel is known to be a great locker room guy, and you better believe his new teammates will remember who he is now so they don?t get duped again.