Editor's note & warning: This piece mentions accounts of alleged sexual assault that you may find disturbing and difficult to read. If you or someone you know is a survivor of sexual assault, contact the National Sexual Assault Hotline at 1-800-656-4673 or visit Rainn or Safe Horizon for free and confidential support. You are not alone.

The NFL's Week 13 is finally here, and whether we like it or not, that means the return of Cleveland's very own creep: Deshaun Watson. The Browns quarterback will be facing his former Houston Texans team after completing a weak, 11-game suspension. We will know soon enough how Watson's homecoming will be received, but  I'm expecting a roaring mingling of boos and cheers.

The suspension itself was met with a mixed bag of reactions, which is weird since it should be easy to stand against people accused of being sexual predators. Some felt Watson should have been removed from the game for the entire season, while others didn't believe the women who came forward and thought the Cleveland quarterback shouldn't have been suspended at all.

The only thing giving hope to many football fans in the days leading up to Watson's return is knowing that at least 10 of the women who said they were affected by Watson's punishable behavior will be attending the game. The accusers' display of bravery and resilience toward a league with an abhorrent history of going soft on sexual predators and abusers helps continue a necessary conversation about the imperative nature of holding men accountable -- no matter their profession.

Money, power and fame shouldn't give anyone a free pass. Yet we as a society continue, time and time again, to allow those accused of abuse to go on living their lives as if nothing happened -- like making millions playing professional football. Watson's reinstatement game will undoubtedly be a powerful snapshot of NFL fans' feelings regarding the controversial athlete. 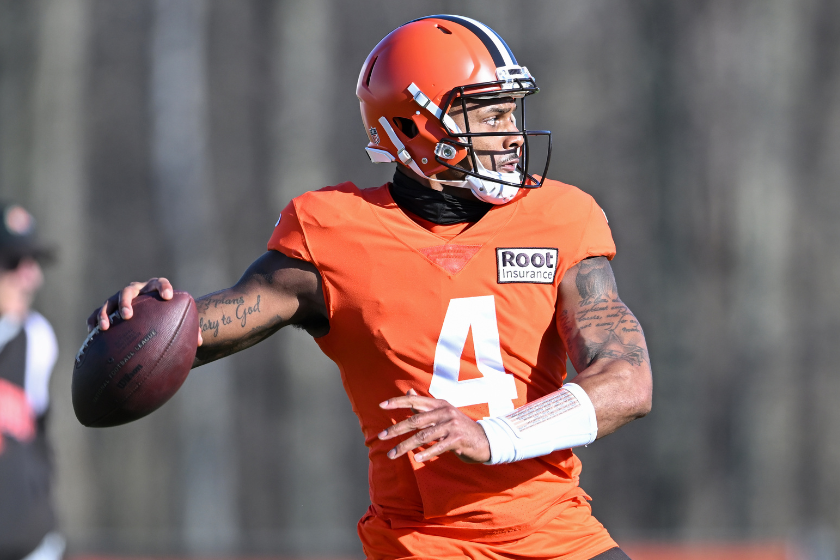 Houston attorney Tony Buzbee has represented many of the women accusing Watson, and his clients reached out to him about the possibility of attending Watson's controversial Week 13 restoration. The majority of women choosing to attend the quarterback's reemergence resolved their cases with confidential settlements, helping Watson avoid going to trial. The women want their presence to remind NFL fans that survivors' lives are important.

"They thought it important to make clear that they are still here and that they matter," Buzbee told USA Today Sports. "I was proud of them for that. I have made that opportunity available to them. I haven't been to a Texans game in over 10 years. But, because they are going I will go as well."

Buzbee supports the attending survivors' decision to bear witness to Watson's return. "I think it's important to note each of these women is different," Buzbee told USA Today. "You can't paint them with a broad brush. I would never encourage any of them to attend. Some never want to hear Watson's name again. Others have put it in the past. Some are still angry. Others are defiant. Makes me proud they want to stand up and be counted rather than quietly go away. Good on them!" 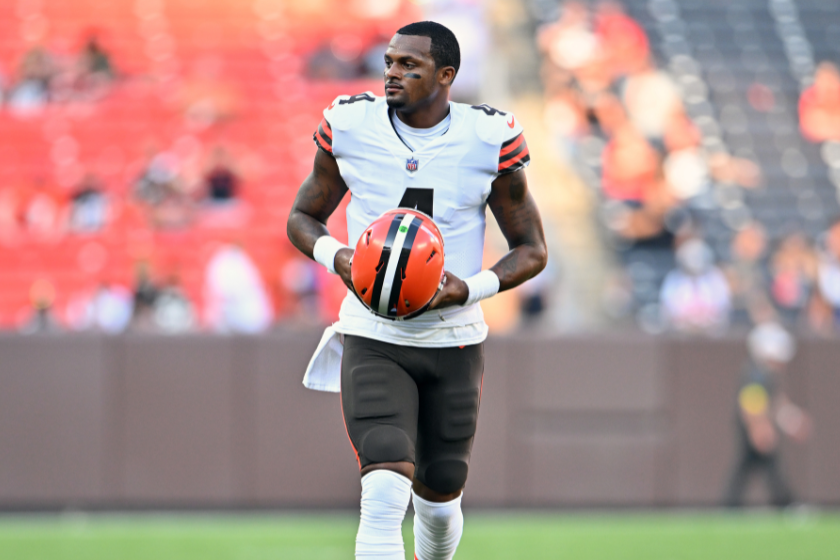 It's easy to lose focus on how we got here to begin with. The masseuse controversy resulted in the NFL handing down an 11-game suspension, $5 million fine and mandatory counseling. Watson hasn't suited up to play since the 2020 season, when he suited up as a Texan in his last regular-season game on Jan. 3, 2021.

Watson's performance Sunday will mark his Browns debut and first NFL game in 700 days since violating the NFL's personal code of conduct policy. To put it in humanity terms, this will be his first game back since being accused by over 20 women of sexual assault.

There is one team linked to Watson with some degree of morals when it comes to sexual assault allegations: the Houston Texans. His former team refused to play the quarterback for its entire 2021 season amid the more than two dozen lawsuits accusing sexual misconduct.

Lucky for Watson, the Browns had no problem inviting him to Cleveland. I wonder if they gave him a list of massage spots with his welcome wagon. How anyone can celebrate a person accused of being a predator coming into their city is beyond me. The women of Cleveland are arguably less safe thanks to Watson's presence and power. We are about to see just how forgiving Browns fans are -- and whether, once again, NFL fans can separate the man from the game.

What Will It Take? 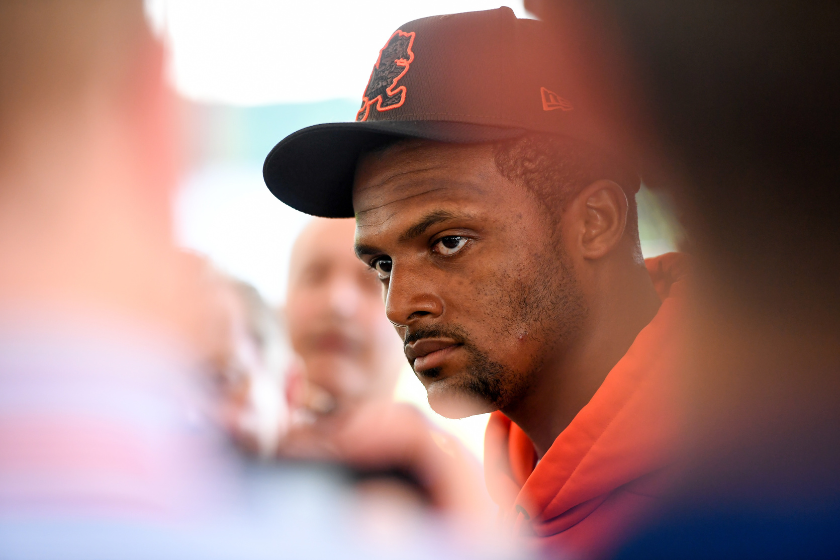 Untangling the man and the athlete has long been a messy puzzle for NFL fans. The league has a lengthy resumé of not only employing but then also handing down lax suspensions, fines and bans to players accused of engaging in domestic violence or sexual assault. This doesn't surprise many of us given the general statistics related to sexual assault in America.

According to Rainn, every 68 seconds, an American is sexually assaulted; and when it comes to rape, only 25 out of every 1,000 rapists will end up in prison. That leaves us with a depressing 2.5% of rapists serving time for their violent crime. With a stat like that so low, should we really expect the NFL to be some beacon of justice for sexual assault survivors?

It took the league until 2014 to update its player code of conduct policy to increase the severity of penalties for players who commit acts of domestic violence, sexual harassment and sexual assault. The league also added a personal conduct policy that would penalize players even if their transgressions did not result in criminal convictions -- and, let's be real, most sexual assault cases will never result in criminal convictions. I'm looking at you, Watson. It's a classic case of he said/she said (over two dozen times), and we all know how those kinds of cases turn out.  But, come on, the league making these changes in 2014 was the bare minimum, right?

Sports is a microcosm of the society we've created, so it's a harsh reality that the NFL will employ some men who abuse women. Men have long dominated the sports world, too. There's a rich, patriarchal system within not only football but everything that surrounds it. Women have been fighting for their right to take up space safely for decades -- from the All-American Girls Professional Baseball League to breakthrough female sportscasters, the fight for equal pay, the battle against poor women's college basketball playing conditions and speaking out against the heinous abuse in women's gymnastics. Men have had a leg up, hoarding power and sometimes wielding it violently, since the beginning.

This is why, when the Deshaun Watson news broke and our news cycle was bombarded with vile stories of his history of sexual abuse allegations, many of us sighed, believing once again the NFL would drop the ball. Sadly, it will require the very men benefiting from the system to change the system -- strong, brave, tenacious, outspoken men ready to end the cycle, ready to do the right thing.

When Watson Takes The Field, Remember This 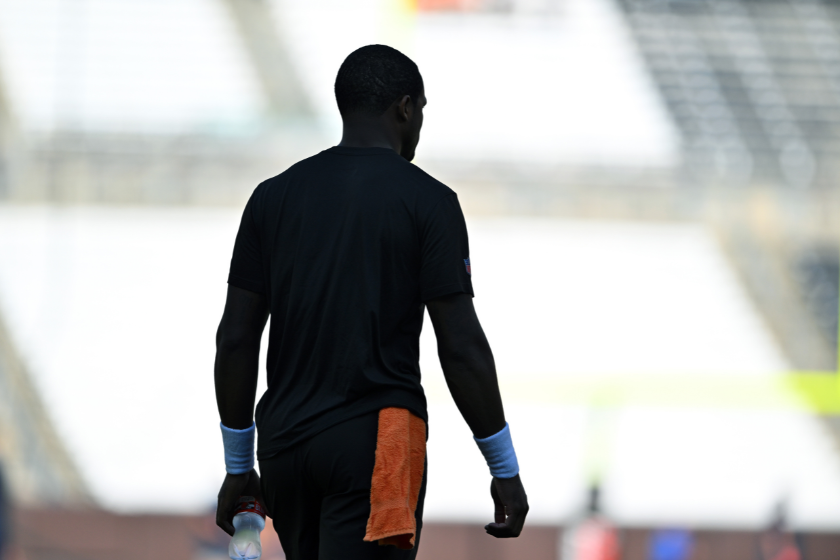 Since we've yet to find our fierce male allyship in the NFL, Watson will take the field Week 13. Some fans will cheer and some may boo, but he'll be given the spotlight on Sunday, once again getting the opportunity to play the game he loves. As you watch the game, or tune in to any of the Sunday action, I want you to remember a few things:

So no, the women accusing Watson of assault can't just get over it.

Watson is accused of seeking out multiple female masseuses across multiple cities and using sex as a weapon to overpower and degrade. Watson has been handed multiple civil lawsuits and settled many, including accusations of forced penetration.

Think of five women you know -- at least one of them has experienced sexual violence. If you're reading this and are thinking to yourself, "These stats can't be right; I don't know any women who have experienced sexual assault," I've got news for you: The women around you just don't feel safe enough or comfortable enough to talk with you about it.

Meanwhile, we're waiting for the NFL to seize the opportunity to make an example out of those accused of sexual abuse, because the harsh truth that many aren't willing to accept is that only 2% to 10% of allegations are false. In this case, the likelihood that 26 women from across the country got together to drag Watson's name and open themselves up to harsh criticism or attacks is downright laughable. This is why so few victims come forward -- they fear not being believed and know they'll likely face backlash for speaking up.

The bottom line is: One survivor should be enough to change the system. One. In this instance, we have over two dozen. So as Browns fans cheer for Watson's debut in brown and orange, and NFL fans celebrate the quarterback's return, look around before you join in the jubilation -- women you love and care about are watching. We see you. We see you celebrating the attempted redemption song of someone facing numerous allegations of abuse. We're asking you to be better. We're asking you to stand with survivors and believe women. As a survivor myself, I hope we can all band together to stop giving power and fame to men who harm women -- and the NFL could be a meaningful start.