You wouldn't be alone if you needed some time Tuesday night to come back down to Earth after the roller coaster ride the US Men's National Team took us on in their final group stage match against Iran in the 2022 FIFA World Cup in Qatar. It's likely you got caught up in the euphoria of the 38th minute goal from Christian Pulisic, followed immediately by concern for the injury he picked up while burying it in the back of the net.

That was then replaced by the nerves rolling around in the pit of your stomach throughout the second half as Iran stepped up its pressure in search of an equalizer that would send them through to the knockout round. The intensity skyrocketed with every second that ticked off from the nine minutes of added time, until finally a giant exhalation when the final whistle was blown. 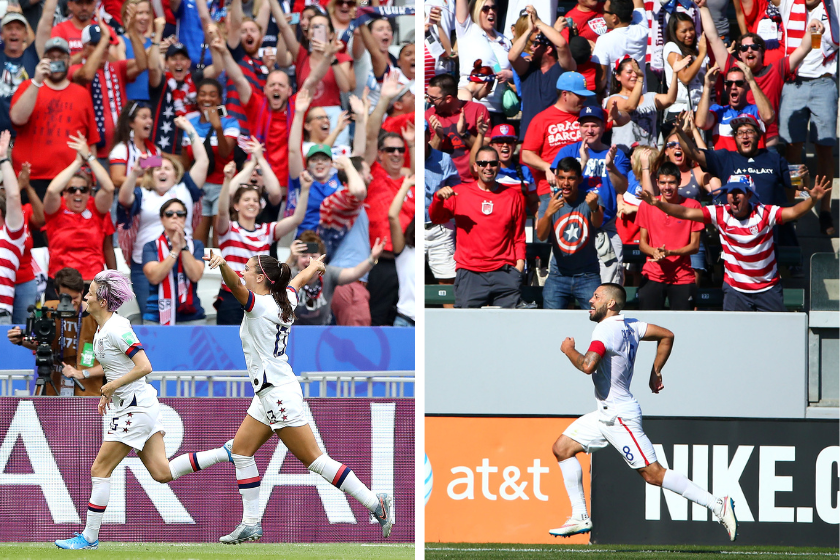 RELATED: Landon Donovan: The USMNT Star with No Home

After it sunk in, you no doubt partied with anyone and everyone you could find, celebrating the achievement this young squad managed by finishing second in the group and advancing to face the Netherlands in the knockout round. What you may not have heard about through all the celebrations was the fact that, as a result of the victory, the USWNT will share $13 million in prize money with the men, thanks to the equal pay settlement between the USSF and the USWNT back in February.

For years, players like Megan Rapinoe, Alex Morgan, and Cristen Press have been dominating on the pitch wearing the jersey of the United States. They have helped grow the popularity of the sport in this country for decades. World Cup Champions, Olympic Champions, the list goes on and on of their achievements--yet for all their success, they were fighting for equal pay with the men. The $6.5 million they'll receive as a result of the USMNT advancement (which will grow should the men's team defeat the Netherlands to advance further in Qatar) is more than the USWNT made for winning the 2015 and 2019 World Cups combined ($6 million). It's a big step forward in the ongoing battle for pay equity around the world. Like the USMNT looking to advance in Qatar, this battle continues as well. Let's hope that forward progress continues on both fronts.

MORE: Brandi Chastain Helped Put US Women's Soccer on the Map, But Where is She Now?