When the Philadelphia Eagles drafted DeVonta Smith with the 10th overall pick in the 2021, they hoped for big things. The former Alabama wide receiver was being reunited with college quarterback Jalen Hurts. Philly is hoping that duo brings them back to glory. And they could absolutely do that, and be good for a long, long time.

Cut to today, and the 23-year old wideout is going OFF in Washington. Sure, this Commanders team is probably subpar at best, but the first half of this game they are getting absolutely destroyed. Smith had seven catches for 156 yards and a beautiful touchdown.

However it was the lead up to the touchdown that may be his best grab of the day.

Smith Climbs The Ladder For An Unreal Grab

RELATED: DeVonta Smith Cemented Himself as Alabama's Best WR Ever

On a first-and-10 from the Washington 45-yard line, Jalen Hurts lined up in the shotgun. There were 37 seconds to go, and the Eagles had one timeout remaining. The ball was snapped, Hurts dropped back to his own 45-yard line and unleashed a bomb over the numbers.

DeVonta Smith was very clearly double covered, but the kid has some serious ups. He went up for the grab over Kendall Fuller and somehow pulled in yet another miraculous catch.

Moments later, Smith found his way into the corner of the end zone, and hauled in his first touchdown of this very young season. Roll Tide in Washington? Roll.

DeVonta Smith and the Eagles are Legitimate Super Bowl Contenders 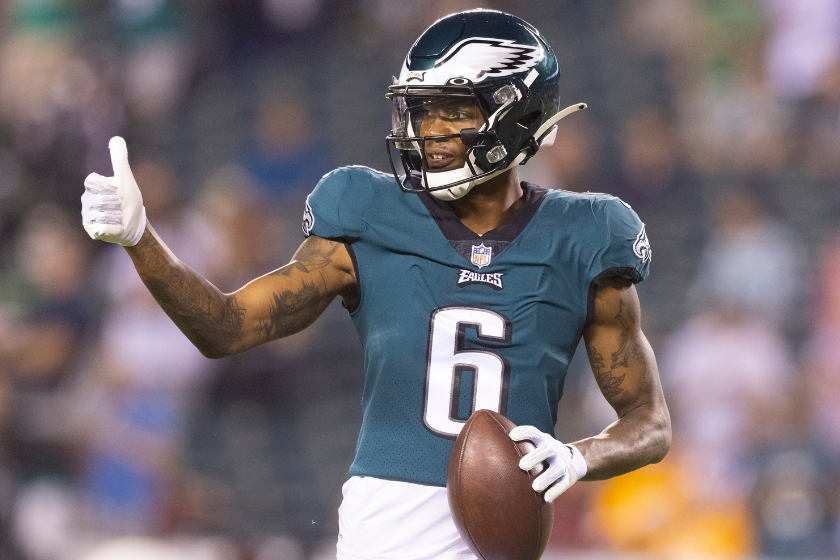 It clearly is a positive that Hurts and Smith have been familiar with each other for years now. This will make Smith's adjustment to the NFL at lot more smooth. And, in his second season, looks like he can help to carry this Eagles team deep into the playoffs. It's been a minute since they've had the opportunity to feel confident in their short and long term futures. And this pair from Alabama is giving Philadelphia reason to believe.