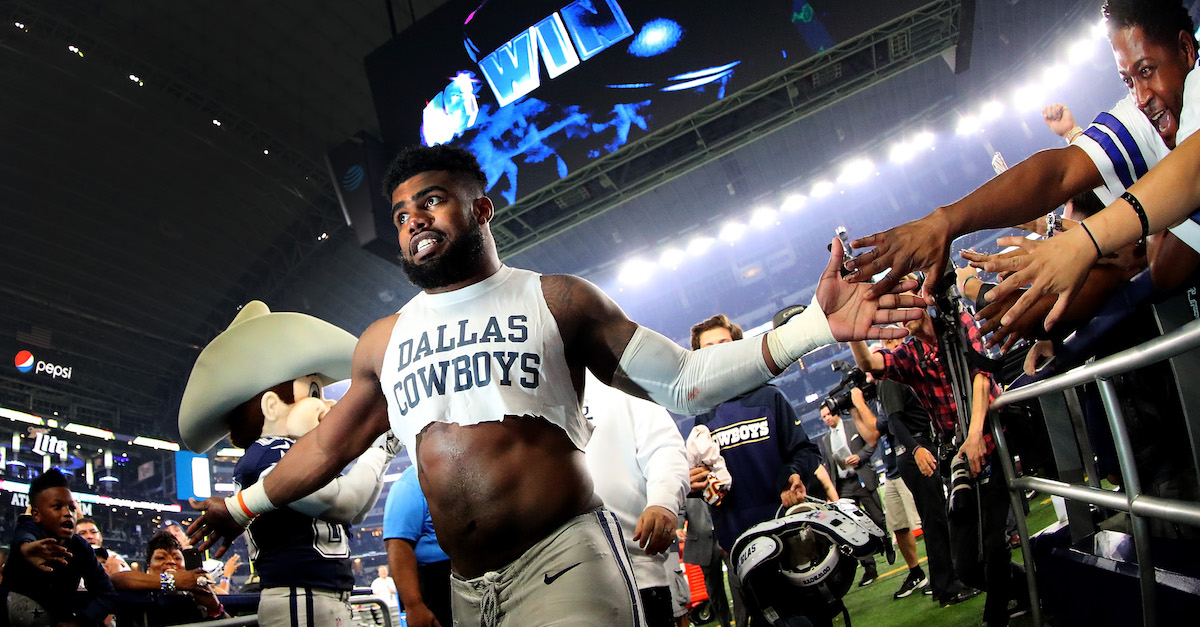 Dallas Cowboys running back Ezekiel Elliott is one of the NFL’s most eclectic personalities. He jumps into giant red kettles and tries convincing everyone he’s not fat, but more than anything, he’s one of the games most dominant ball carriers. Since entering the league in 2016, no player has more carries (868) or rushing yards (4,048) than Zeke, and he’s only played 40 out of a possible 48 regular season games over that span.

The 23-year-old running back is a two-time All-Pro in his young career, so naturally he’s going to be a little bit cocky. But how cocky do you have to be to get your face tattooed on yourself? Apparently, Elliott answered that question for all of us.

On the outside of his right calf is Zeke’s own face, complete with a crown and zombie eyes, just in case anyone wondered what his face might look like if he suddenly became The Night King.

RELATED: This Alabama Fan Forever Has a Giant Nick Saban Tattoo on His Back

Elliott certainly isn’t the first person, nor the last, to tattoo themselves on themselves.

Legendary stuntman and comedian Steve-O ran into a TMZ reporter who asked what the famed “Jackass” actor thought of Elliott’s new ink. I mean, there’s no one better to critique it since Steve-O’s entire back is a portrait of his own face.

“I think that it’s perceived as kind of a douchey thing to do, but that’s why it’s funny,” Steve-O laughed. “Everybody’s favorite topic of conversation is themselves. So, why not just celebrate that?”

The fourth overall pick in the 2016 NFL Draft and former Ohio State Buckeye has plenty of reasons to feel good about getting a new tattoo of his own face. Dallas picked up the fifth-year option on Zeke’s rookie contract this offseason, which will pay him over $9 million in 2020. Alongside quarterback Dak Prescott, Dallas is coming off an NFC East division title last year and are poised to make another run in the 2019 season.

If Elliott gets his own mug tatted on himself after a season like that, imagine what would happen if Dallas goes out and wins the franchise’s sixth Super Bowl title?