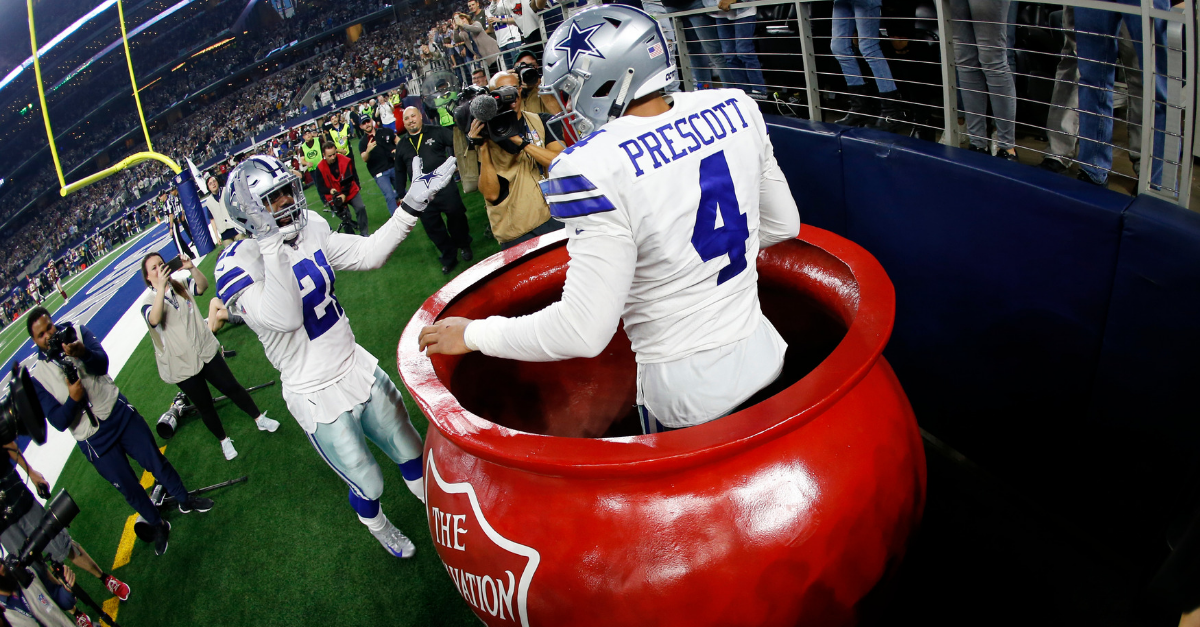 Just when you thought the National Football League, and power-hungry commissioner Roger Goodell, couldn’t do anything more to tick off its fan base, the most powerful professional sports league in North America went ahead and did just that.

After tossing $21 and his quarterback into a giant Salvation Army kettle that rests behind the end zone at AT&T Stadium, Dallas Cowboys running back Ezekiel Elliott was fined $13,369 by the NFL for the harmless stunt. As you can expect, Elliott was baffled about the fine because the intention was to raise awareness to an amazing cause. Apparently, the NFL doesn’t share that same idea of charitable fun.

It was Thanksgiving in Arlington. Dallas, as is tradition, was playing on an afternoon filled with family, friends, spatch-cocked turkey and football. All that said, the Grinch of the NFL watched from atop Mount Crumpit hoping to stir up controversy wherever it could be found.

Elliott was enjoying one of his best games of the NFL season, as he racked up 121 rushing yards and a touchdown during the Cowboys’ 31-23 win over their division rival, the Washington Redskins. In harmless fun, Elliott tossed $21 in cash, representative of his jersey number, into the giant Salvation Army kettle after his 16-yard touchdown run in the first quarter.

Later in the game, after Cowboys quarterback Dak Prescott scored on a 5-yard touchdown run of his own, Elliott hoisted his teammate up and threw HIM into the iconic kettle.

Back in 2016, Zeke himself jumped into that same red kettle after scoring against the Tampa Bay Buccaneers. He was flagged for an unsportsmanlike conduct penalty, but the NFL decided he would not be fined for the hilarious celebration.

Well, in classic backtracking, unpredictable NFL fashion, the league decided to fine Elliott this time around for the exact same thing, and the All-Pro running back is just as baffled as we are.

“I mean, I didn?t really expect a fine. Really don?t care about the fine. It?s all for a good cause. We?re trying to bring awareness to the Salvation Army. If the NFL doesn?t like that, then, that?s on them. I?ll pay their little fine.”

“A lot of things they do define ridiculous.” — Ezekiel Elliott, per Yahoo! Sports

Elliott plans to appeal the fine. Both he and Prescott, the latter of whom was selected as Dallas’ nominee for the 2018 Walter Payton NFL Man of the Year, made $21,000 donations to the Salvation Army after the Thanksgiving Day game.

Together with the Dallas organization, the trio plans to match every $21 donation that is made to the Salvation Army to capitalize on the superstars’ harmless in-game stunt.

Join @EzekielElliott, @dallascowboys, and @dak in the #FightForGood. They will match your $21 donation and quadruple the value to help your neighbors in need. Visit https://t.co/ijpOjF7eIQ and turn $21 into $84 today! pic.twitter.com/f3Ghc6Y3ir

For the NFL to reprimand a touchdown celebration by a player with all the best intentions, and is one of the league’s biggest young stars, is exactly what’s wrong with this league. The NFL is in the midst of more domestic violence and abuse issues surrounding Reuben Foster and Kareem Hunt, but they just can’t keep themselves from playing the “fine police” and calling out every stunt they don’t like.

Of course, league decision makers didn’t fine any of their officials who absolutely blew multiple calls in Dallas’ game the following week. I mean, why would they want to improve their product by casting discipline where it’s actually needed?

The NFL should be ashamed of itself for a fine like this. Celebrations rules or not, this was a harmless act that bothered nobody outside of league headquarters. They felt the need to make an example out of Elliott’s harmless stunt, and they made themselves into the villain once again.

If the league had any semblance of sense, Elliott’s fine money would go to the Salvation Army’s cause, but that’s likely not going to happen either.