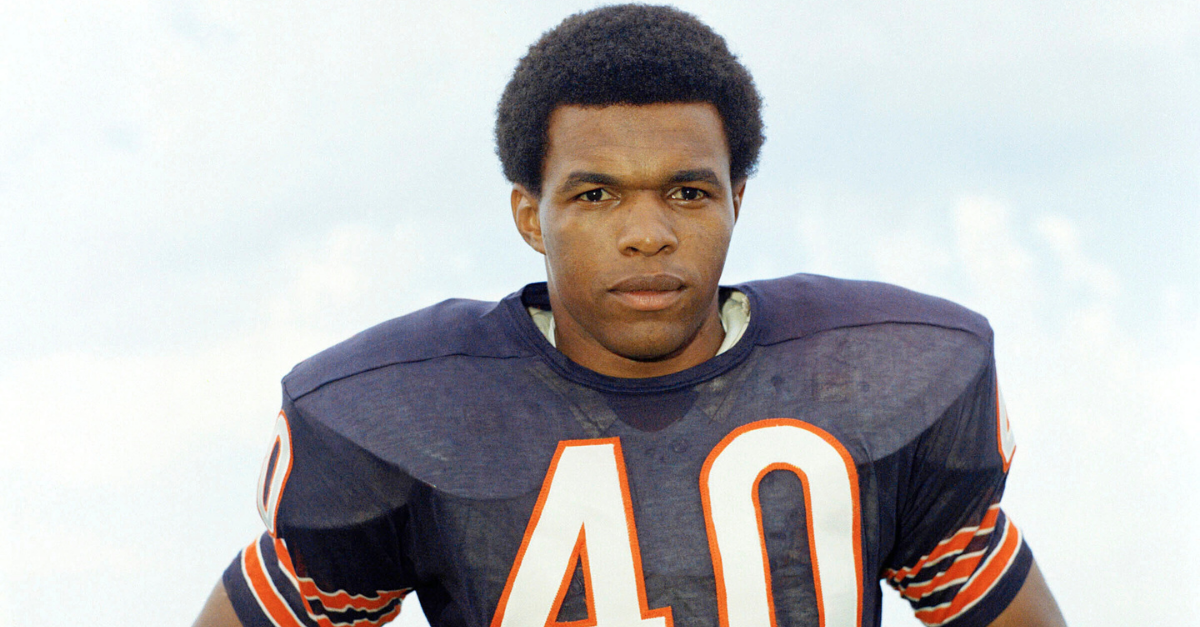 In the National Football League, players get injured all of the time, but few are more of a “What If” story than halfback Gale Sayers.

One of the most explosive and talented football players in professional football history, Sayers was limited to just seven seasons with the Chicago Bears due to injuries and barely even played in the final two.

Hall of Famer and @ChicagoBears Legend Gale Sayers has passed away at the age of 77.

Sayers was great. Better yet, he was special, and left a lasting impact in a short time. Sadly, after living with dementia, Sayers passed away in September 2020. He was 77.

“All those who love the game of football mourn the loss of one of the greatest to ever play this game with the passing of Chicago Bears legend Gale Sayers,” Hall of Fame president and CEO David Baker said in a statement. “He was the very essence of a team player — quiet, unassuming and always ready to compliment a teammate for a key block. Gale was an extraordinary man who overcame a great deal of adversity during his NFL career and life.”

Let’s take a look back at his incredible life:

RELATED: Barry Sanders Retired in His Prime. What Made Him Do It?

As a member of the Kansas Jayhawks, Sayers — known as the Kansas Comet — was great as a two-time Consensus All-American. He rushed for 2,675 yards and 18 touchdowns in three seasons, averaging 6.5 yards per carry. He was inducted into the College Football Hall of Fame in 1977.

Sayers’ playmaking ability immediately translated to the NFL after being selected in the first round with the fourth overall pick in the 1965 NFL Draft by the Chicago Bears. He was picked right after fellow Bears legendary linebacker Dick Butkus — the third overall pick.

The 6-foot, 200-pounder was also selected fifth overall by the Kansas City Chiefs in the 1965 AFL Draft.

Sayers could have stayed close to home with the Chiefs, which would have made sense because he was born in Wichita, Kansas and attended college at the University of Kansas. However, the All-America halfback would sign with the Bears and play his home games in Chicago, Illinois at Wrigley Field.

In his rookie season, Sayers had one of the best debuts in NFL history. He rushed for 867 yards and 14 touchdowns, caught 29 passes for 507 yards and six touchdowns, and had a punt return and kickoff return for touchdowns.

The best game of his career came against the San Francisco 49ers when Sayers matched an NFL record with six touchdowns. He rushed for 113 yards and four touchdowns on nine attempts, caught two passes for 89 yards and a score, and also returned five punts for 134 yards and a touchdown.

His 22 touchdowns as a rookie were an NFL record and wouldn’t be topped for another 10 years. He was obviously awarded the NFL Rookie of the Year award for his great play.

Sayers then would follow that up with his best regular season on the ground in his pro career the very next season, rushing for 1,231 yards and eight touchdowns, while also catching 34 passes for 447 yards and two touchdowns. He also returned two kickoffs for touchdowns.

What made Sayers so great was not just his ability to run the ball from the backfield, but he could also destroy a team in different ways. He was one of the most dangerous kick-returners of all time and also being extremely talented catching the ball out of the backfield.

In 1967, Sayers missed just one game of the season, but was still selected to the Pro Bowl and as an All-Pro. In 1968, the first season after head coach George Halas left the team, he missed the final five games due to a right knee injury, but he had a career-high in yards-per-game at 95.1.

In 1969, He played in all 14 games and rushed for an NFL-high 1,032 yards and eight touchdowns. This great season earned him his fourth Pro Bowl selection and fifth First-Team All-Pro selection as well as the NFL’s Comeback Player of the Year.

Unfortunately, that would be his last great season.

Due to left knee injury in the preseason, Sayers would only play in two games during the 1970 season and then just another two games in 1971 before retiring.

This time period is also when his friendship with teammate Brian Piccolo became known and was portrayed by Billy Dee Williams in the TV movie, Brian’s Song. It was also detailed in his autobiography “I Am Third.”

How Great Could He Have Been?

Gale Sayers was one of the shiftiest dudes to ever lace 'em up 💯 @ChicagoBears pic.twitter.com/FwiSYZdJsL

Sayers played in just 68 games throughout his NFL career. For comparison, Emmitt Smith played in 226 and Walter Payton played in 190. Even Barry Sanders, who retired early from the NFL, played in 153 games.

Only seven players have averaged more rushing yards per attempt during a career than Sayers’ 5.0 average. Three of those are quarterbacks.

If we could take away those final two years of injured seasons and got 10 healthy, or at least decently healthy, seasons from Sayers where he played 128 games — twice as many as he played in his first five — he would have rushed for 9,732 yards if he continued to average about 76 yards per game like he did in those All-Pro seasons.

Even though that number would have been just 32nd on the NFL’s All-Time Rushing List, his rushing stats aren’t the only thing that made him great. He was a really good receiver, too, and great return specialist. With another 60-plus games, what damage could he have done if his body held up?

In five seasons, he had 9,435 all-purpose yards, which is 178th on the all-time list. His 6,263 yards from scrimmage don’t rank very high in NFL history, but even just two more seasons would probably have him in the top-200.

If you take his rushing yards per game average and multiply it by 226 — the number of games Smith played in — Sayers would have finished with 17,183 yards, over 400 yards more than Payton finished his career with. Now, obviously, if Sayers played more than 10 seasons, his body would have definitely been beat up and he wouldn’t have been averaging as many yards per game, but he was also averaging five-less rushing attempts per game than Smith did throughout his career and never made the playoffs, reducing the mileage on his legs.

There is a serious case to be made that if Gale Sayers was even remotely healthy for double-digit seasons, he would be seen in a much different way, possibly as one of the best running backs and all-around players in NFL History.

He was a Pro Football Hall of Fame inductee in 1977, the youngest player to ever be inducted. He was also inducted into the Bears Hall of Fame.

However, over a half-century later, it is easy to forget his greatness in conversations about the best backs of all time.

As if the coronavirus pandemic and COVID-19 outbreak wasn’t already tough, losing Hall of Famer Gale Sayers is another sad moment.

After football, Sayers worked in the athletic department at the University of Kansas before he became the athletic director at Southern Illinois University Carbondale. He founded Crest Computer Supply Co, and he and his wife, Ardythe, were philanthropists in the Chicago area.

This post was originally published on July 12, 2019 and updated after the news of his death.