Walter Payton Died 20 Years Ago, But ‘Sweetness’ Will Live Forever 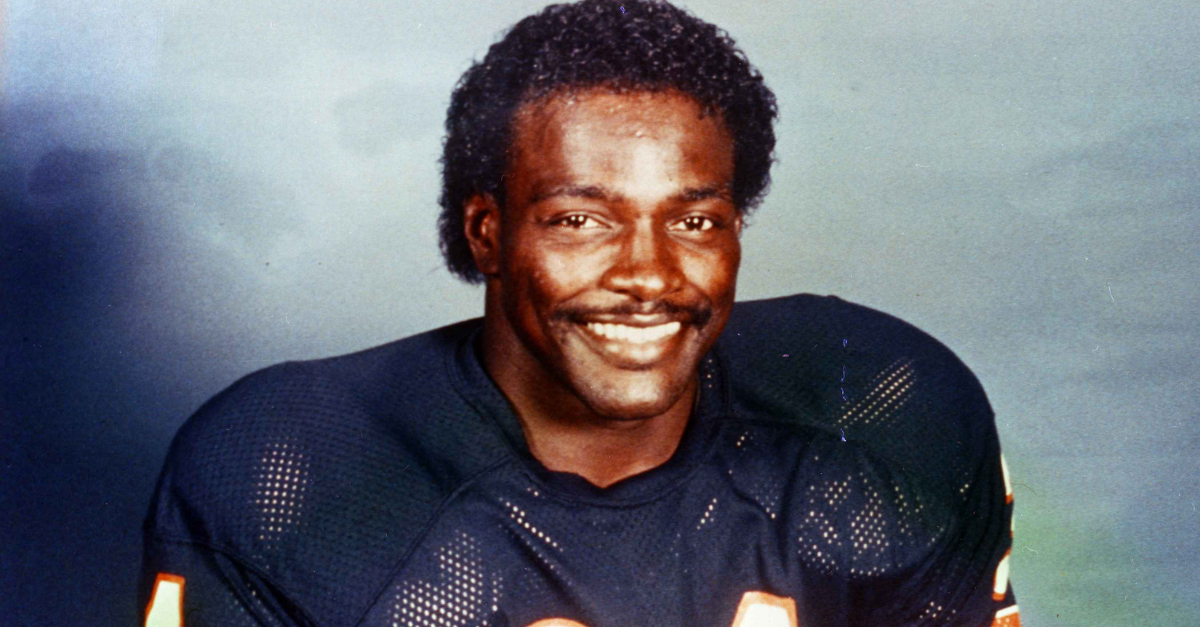 It’s been 20 years since iconic Chicago Bears running back Walter Payton passed away, but the historic man still lives on in so many ways, both on and off the field.

Payton died of Cholangiocarcinoma (bile duct cancer) on November 1, 1999 after a battle with the rare liver disease, Primary sclerosing cholangitis. Despite his unfortunate death, multiple rushing records, buildings and awards named in his honor will never allow ‘Sweetness’ to be forgotten.

Walter Jerry Payton, known as Sweetness, is one of the best all-around players in the history of the National Football League. The Chicago Bears legend played 13 seasons with the team and retired as the league’s all-time leader in rusher yards and all-purpose yards.

But Payton wasn’t just a great player on the field; he also did incredible things to improve the world around him. After announcing his sickness, Payton became an advocate for organ transplants, even though a liver transplant wasn’t an option for him.

To speak up for a cause that couldn’t help him while he had limited time left is truly a great act of a wonderful person.

Thank you for helping our family keep my father’s legacy alive. Pound for pound, he’s the best I’ve ever seen. The true definition of a football player. @DJTRACKADDICT, your beat makes the highlights so much better! 🙏🏽#HBDSweetness @walterpayton pic.twitter.com/atUjch6kmm

His advocacy for organ transplants led to a rise in organ donations and helped raise awareness in Illinois, as well as the entire country. But helping increase organ transplants wasn’t the only charitable work he did.

Payton also began a charity organization named The Walter and Connie Payton Foundation that helps give toys to underprivileged families during Christmas, help gather back-to-school materials for children in Illinois, as well as hosting events and projects throughout the year. After Payton’s death, his family also started the Walter Payton Cancer Fund in 2002.

The work Payton did in the community, and the impact his work still has today, is the reason the NFL now gives the Walter Payton NFL Man of the Year Award to the player who best embodied the legacy of Payton with charity and volunteer work. It was originally called the NFL Man of the Year Award until 1999 when the league decided to honor the 1977 winner of the award forever.

Payton also has an award with his name for his play on the field. Since he played college football at Jackson State University ? an FCS-level school ? the Walter Payton Award goes to the best offensive player in Division I FCS. He chose to follow his brother Eddie to the historically black college after not being recruited by major programs, even though he was one of the best high school running backs in Mississippi.

In four collegiate seasons, he rushed for 3,600 yards and 63 touchdowns. Those numbers earned Payton induction to the College Football Hall of Fame. Jackson State’s wellness center was renamed the Walter Payton Recreation and Wellness Center and is located at 34 Walter Payton Drive, Jackson, Mississippi.

He was an All-American in 1974 before being selected by the Bears with the fourth-overall pick in the 1975 NFL Draft.

One of the greatest football players we've ever seen.

RELATED: Emmitt Smith?s Net Worth: How The NFL?s Rushing King Racked Up Millions

More than anything, Sweetness will always be remembered most for his dominant play and evading tacklers for the Chicago Bears. During his 13-year career, Payton rushed for a then-NFL record 16,726 yards and 110 touchdowns, breaking records previously held by Jim Brown. He also caught nearly 500 passes for 4,538 yards and 15 touchdowns. He set the single-game rushing record in 1977 against the Minnesota Vikings, running for 275 yards on 40 carries, even though he had a fever of 101 degrees.

Though it was the defense and head coach Mike Ditka that led the 1985 Bears to a Super Bowl, Payton was still vital. Against the New York Giants, St. Louis Rams, and New England Patriots, Payton rushed for a combined 186 yards on 67 carries. Chicago won those three playoff games by a combined score of 91-10, including a 46-10 victory over the Patriots in the Super Bowl.

He was enshrined in Canton forever when he was voted into the Pro Football Hall of Fame as part of the Class of 1993. Payton was named to the NFL’s All-Decade team for both the 70’s and 80’s as well as the NFL 75th Anniversary All-Time Team.

Payton almost played a role in bringing an NFL team to St. Louis, too. He was part of a group that was trying to buy an expansion team and make Payton the first minority owner in NFL history, but it fell through. The Los Angeles Rams did eventually move to St. Louis though.

Bears founder George Halas and running back Walter Payton will be the first former players commemorated with a statue at Soldier Field. https://t.co/yZIMn4Y7Ax

He has been represented in the NFL by his daughter Brittney and son Jarrett, who wore his No. 34 while playing at the University of Miami from 1999 to 2003.

Though his rushing record may have been broken by Emmitt Smith, his influence in the game and off the field will always be remembered as a great person and great football player.

Payton may be gone, but Sweetness will live forever.

READ MORE: Did You Know ‘Apollo Creed’ Actually Played in the NFL?