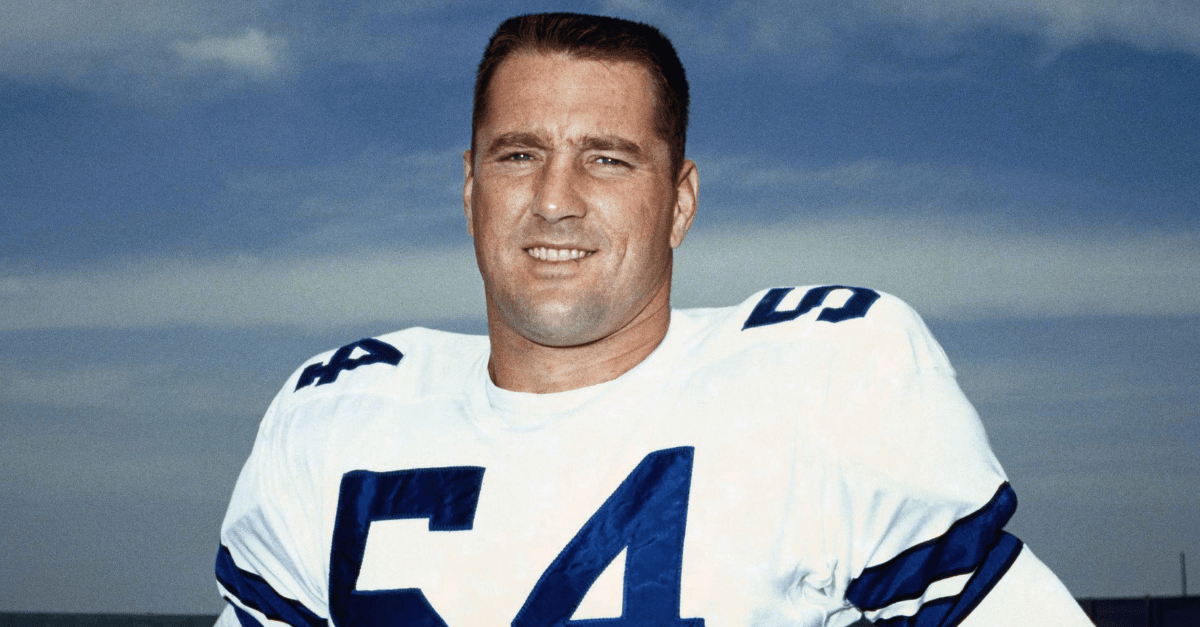 The Pro Football Hall of Fame is a monument to the greatest people in the history of the sport, but is also has its issues. Chuck Howley not being a member of the football players inducted into Canton is definitely one of them.

One of the first great Dallas Cowboys, Howley is still one of the best linebackers to ever play in the NFL and the fact he was never inducted into the Hall of Fame is ludicrous.

Who is your favorite Super Bowl MVP? pic.twitter.com/iG02l98jPi

RELATED: Does Pete Rose Belong in the Hall of Fame? Absolutely.

When a player does something for the first time, and it hasn’t happened since, that should almost be enough for the folks in Canton to recognize a player. However, Howley did more than just win the Super Bowl MVP on a losing team.

Did you know there has only been one Super Bowl MVP from the losing team in the big game? That man is former #WVU standout Chuck Howley #HailWV https://t.co/8ImEOKZ997

1. Chuck Howley.. There was a paper thin margin between he & Huff but I give the nod to Chuck. Recovering from a potential career ending knee injury in ‘60 to play 15years,become a SuperBowl MVP, 6x ProBowler (most ever by a Dallas LB), grab 25 INTs, 18 forced fumbles & 3 TDs…

After participating in multiple All-Star games, he was noticed by the Chicago Bears and selected with the seventh-overall pick in the first round of the 1958 NFL Draft. He played two seasons for the Bears before suffering what seemed to be a career-ending knee injury during training camp in 1959.

In 1961, Howley decided to make a comeback and the Bears traded his rights to head coach Tom Landry and the Dallas Cowboys, who were in just their second NFL season. Howley was one of the key pieces in Landry’s “Doomsday Defense.”

Throughout the next decade, Howley cemented himself as one of the best linebackers in the NFL as a six-time Pro Bowler with five All-Pro First Team selections. However, maybe his most impressive achievement came at the end of the 1970 season.

Who is your favorite Super Bowl MVP? pic.twitter.com/iG02l98jPi

After making the playoffs in the previous four seasons, the Cowboys appeared in the franchise’s first NFL championship game, Super Bowl V. Although Dallas would lose to the Baltimore Colts, 16-13, Howley would do something that had never been done at that point and has yet to be done again. He is the only player to be named Super Bowl MVP as a member of the losing team, thanks to an incredible performance with two interceptions.

And if that wasn’t enough, when the Cowboys returned in Super Bowl VI the following year, he was just as good when they beat the Miami Dolphins, 24-3. He had an interception, which he returned 41 yards, and also a fumble recovery. He didn’t win the MVP this time, though. The award went to quarterback Roger Staubach.

Another guy I can't believe is not in the Pro Football Hall of Fame is Chuck Howley. 6x Pro Bowl, 5x All-Pro, Super Bowl V MVP, Super Bowl VI Champion. One of the great athletes to ever play the LB position. He should be in Canton already. #DallasCowboys pic.twitter.com/msD4ZhGSxt

There are a few key things that stand out as to why Chuck Howley should be in the Pro Football Hall of Fame. First, he was so dominant in the Super Bowl that they named him the Most Valuable Player even though his team lost. It literally has never happened again.

He was an All-Pro linebacker five times. He has as many, or more All-Pro First Team selections than 230 members of the Pro Football Hall of Fame (194 members have four of those or less).

Of 37 players to win a Super Bowl MVP who are not currently active players, 22 have been inducted into the Hall of Fame. Peyton Manning will soon be inducted.

Howley was one of the best linebackers in coverage of all time, intercepting 25 passes and returning them for 399 yards and two touchdowns.

With a long and extremely successful career with many awards and honors, such being inducted into the Dallas Cowboys Ring of Honor, it is actually quite amazing that he didn’t get selected to be a Hall-of-Famer.