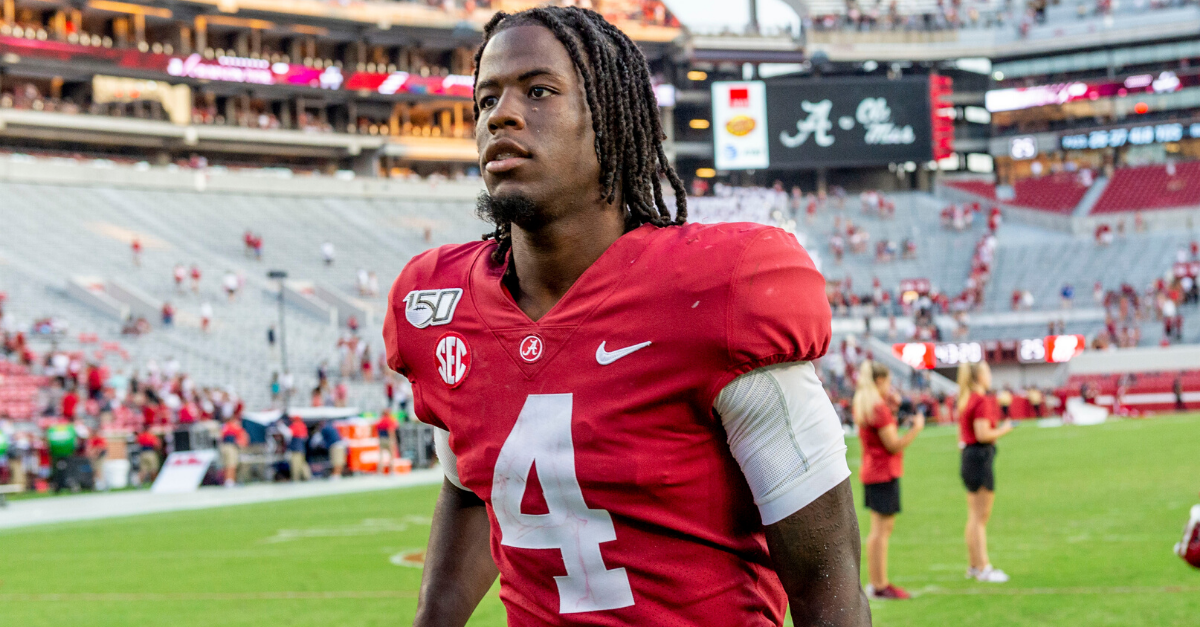 Jerry Jeudy is not who you think he is. Whereas most of the big-name wide receivers to emerge from Miami like the Antonio Browns and Chad Johnsons are flashy, arrogant and maintain an all-about-me attitude, Jeudy couldn’t be further from that depiction.

And yes, he cooked defensive backs and cornerbacks every weekend last season to cement himself as the best wide receiver in college football, which is why he’s a potential first-round pick in the 2020 NFL Draft. Mock drafts predict the route-running expert could be the first wideout off the board in a class full of superstar pass-catchers like Oklahoma’s CeeDee Lamb and Alabama’s own Henry Ruggs.

None of that happens without Jeudy’s mother, Marie.

There’s multiple layers to that statement. Marie struggled financially yet still provided for Jeudy and gave him everything possible to succeed on the gridiron. Jeudy returned the favor and balled out so he could one day provide for the woman who gave birth to him.

As the draft approaches, that’s exactly his intention.

Always Want That Smile On Her Face 🌎🐘‼️ pic.twitter.com/nfg6fVeTOm

They Ask Me Who I Do It For, Why I Shine, Why I Grind, The Way I Do it 🌎❤️. #happymothersday pic.twitter.com/c0q4VxlL68

Marie Jeudy was born in Haiti and headed for the United States when she was just 14. She didn’t know the first thing about American football but saw it as a dangerous sport she wanted to keep Jerry Jeudy, a scrawny boy growing up, away from.

Marie worked her butt off as a single mother following a divorce from Jeudy’s father. She made parachutes at an Army factory, served as a nurse at an assisted living facility and even sold blankets, jewelry, purses and lotions out of her car, according to Sports Illustrated. All so she could keep her four children fed.

She took her kids to Haiti every summer to humble them, Jeudy’s sister Diane told ESPN. The lesson learned: Be happy and make the most with what you have. Jeudy still carries the values she instilled to this day.

Jerry Jeudy’s plan all along was to give back to his mother. He just needed time.

Before he stepped foot on campus, he tweeted this in 2016:

As a high school junior in 2015, Jeudy thought similarly:

Even way back in 2014 when Jeudy was still focused on putting on weight, he was looking forward to his mother’s face when he finally made it. He won’t have to weight much longer.

By the time Jeudy’s days at Deerfield Beach High School were coming to a close, he was a five-star recruit. Plenty of NFL wideouts over the years have hailed from South Florida — Antonio Brown, Calvin Ridley, Phillip Dorsett, Amari Cooper, T.Y Hilton — but so many have flopped.

The 6-foot-1, 192-pound receiver tallied 100 receiving yards in five different games in 2019. The most eye-popping: six receptions for 204 yards in Alabama’s win over Michigan in the Citrus Bowl (without Tua Tagovailoa) to cap his junior season.

Three days later, Jeudy posted the announcement to his social media accounts. He was entering the 2020 NFL Draft. His work in Tuscaloosa was finished.

Jeudy turns 21 on April 24, a day after the first round of the NFL Draft will take place in a virtual format. However, he won’t be getting himself a gift. He plans on buying Marie her dream car when he receives money from his rookie contract: a white Range Rover.

?There?s so much more out there in life you can do, but that?s one of the main goals,? Jeudy told Sports Illustrated. ?Buy my mom a car, buy her a crib, tell her she gotta work no more ? that?s going to be one of the best feelings ever. I can feel it coming.?

Jerry Jeudy’s Sister Passed Away at 7

Jerry Jeudy’s draft day will be filled with smiles around the room, and another that will be looking down on him.

Jeudy’s yonger sister, Aaliyah, was born premature and diagnosed with a rare condition that doctors told Marie she had a 10-percent chance of even living to see her first birthday. For her entire life, she needed someone caring for her. Jeudy, being the good big brother he was, sometimes suctioned mucus from her breathing tube while still in football pads after games and practices, he told Sports Illustrated.

Aaliyah defied odds and lived for seven years. On the night she passed away in 2016, Jeudy had just helped lead Deerfield Beach to a a win in the Class 8A state quarterfinals. His brother, Terry, broke the news to him as he walked off the field.

“I love you sis, you in a better place now,” Jeudy tweeted. “I swear I’m going to make it for you and mommy. #RipAaliyah”

I love you sis, you in a better place now, I swear I'm going to make it for you and mommy 🙏🏾😢. #RipAaliyah pic.twitter.com/e2qMlYffXq

Now as the NFL Draft rolls around, Jeudy hasn’t forgotten his younger sister.

He caught flak for wearing a Star of David necklace at the NFL Combine, but he never meant for it to be controversial. Aaliyah’s picture sits in the middle of it as a reminder what he’s working for. In March, Jerry’s daughter was born. Her name? Journee Aaliyah Jeudy.

Come April 23, Jeudy will be surrounded by loved ones. His mother, Marie. His baby sister, Aaliyah. But just know he’s not finished making them proud yet.