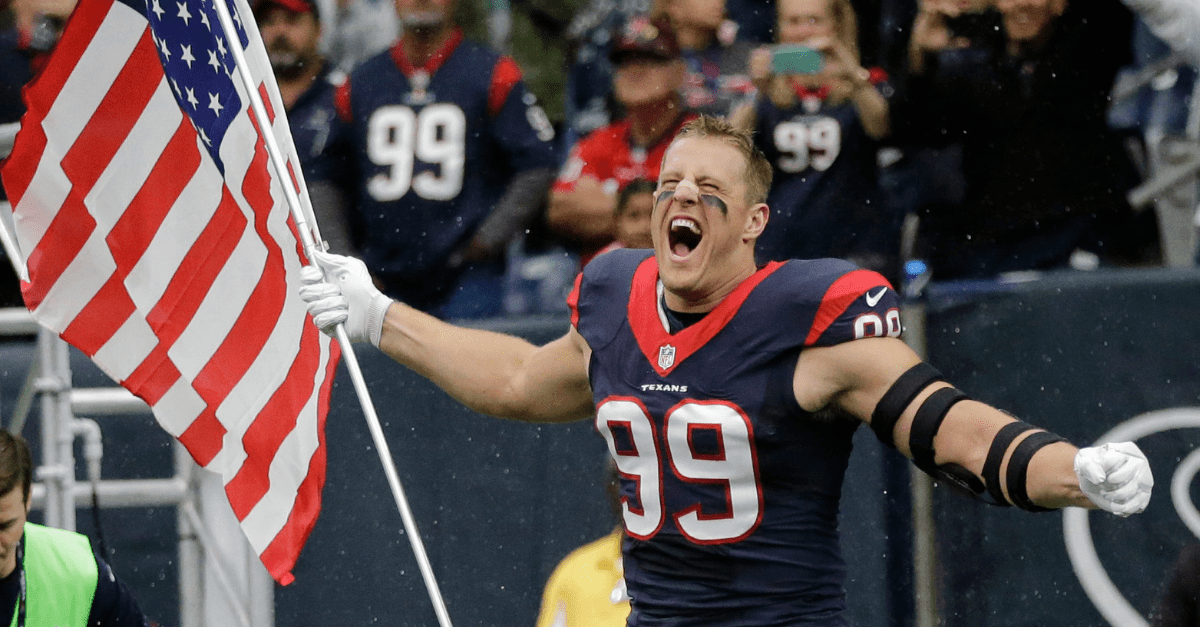 When you think of professional athletes coming out with their own signature shoes, a name like the NBA’s greatest of all time, Michael Jordan, probably comes to mind. After that, NBA All-Stars like LeBron James and Kawhi Leonard might follow suit. Heck, even Carolina Panthers quarterback Cam Newton has his own shoe through Under Armour.

When it comes to Houston Texans defensive end J.J. Watt, though, the first thing you likely think of is quarterback sacks and his unmatched philanthropy, right? Well, the three-time NFL Defensive Player of the Year actually has his own signature training shoes through a partnership with Reebok, and they should definitely be the next athletic shoe you own.

When Watt first signed his deal with Reebok, NFL players weren’t allowed to wear the brand on the field. The NFL relaxed its policies on footwear during pregame warmups in later years, although the NFL and Nike agreed to an eight-year deal in 2018 for the global brand to be the league’s exclusive provider of uniforms during games.

Players like Watt who have deals with companies outside Nike typically wear custom, unmarked shoes made specifically by their endorser during games.

Since you don’t need to worry about ridiculous NFL rules, do yourself a favor and get a pair of new kicks courtesy of a four-time All-Pro in the midst of a Hall of Fame career.

Watt’s first sneaker release came in 2016 when he dropped the Reebok JJ One. These sneakers come with a liquid foam insert adding support around the heel for a little extra cushion. You can get this mid-cut sneaker in black, white, sandstone or a sweet blue beam design like below.

In 2017, Watt upped the ante when he dropped the Reebok JJ II. This low-cut cross training shoe gives you everything you’d want for your weight room training needs. Whether you’re a crossfit fanatic or just looking to stay healthy, these make perfect running shoes with their Lenoweave design for maximum ventilation, plus they’re available in a ton of colors and styles.

Prior to the start of the 2018 season, after coming back from a tibial plateau fracture, Watt and Reebok released a special Clean Slate all-white edition of the JJ Watt II’s to welcome his fresh start. Inside the sock liner is a message that reads, “Never let a stumble in the road be the end of the journey.”

Despite all that, J.J. Watt still wasn’t done.

During the 2018 holiday season, Watt created his most important pair of JJ shoes to date. The new shoes, called the JJ II Valor Edition, were created for members of the Navy SEAL community after Watt met a group of Navy SEAL widows back in 2012 and they became lifelong friends. For every pair of JJ Watt shoes that were sold, an additional pair of free shoes would be donated to the Navy SEAL Foundation. Also, all of the personal gains that Watt made during that time were donated to the U.S. Navy SEAL Danny Dietz Foundation.

A patch inside that shoe reads, “Never Forget, June 28, 2005,” which coincides with Operation Red Wings, a mission that took place in the Korengal Valley of Afghanistan, where many of those Navy SEAL widows lost their husbands. Watt brought in a Navy SEAL to help design the shoe with him.

This pair is special. For so many reasons. For starters, for every pair purchased this holiday season, a pair of JJ’s will be donated to The Navy SEAL Foundation. In addition, all of my personal proceeds from this shoe will go to directly to The Navy SEAL Danny Dietz Foundation. In 2012 while attending a Memorial Day event, I met a group of Navy SEAL widows who have now become lifelong friends. They have since introduced me to many incredible people within the SEAL community and beyond. I wanted to create a shoe to honor that community and do it as authentically as possible. The best way I knew how to do that was to invite a Navy SEAL to work hand in hand with me on designing the shoe. If you watch the video, you’ll see all of the details and thought that went into creating this shoe. I am extremely excited about this shoe and I hope you’ll enjoy it just as much as I do. Thank you and all the best!! It will be available Tonight at midnight on Reebok.com

Watt and the Houston Texans secured another AFC South division title and playoff appearance in 2018, and you can best believe the only athletic footwear touching the feet of one of the NFL’s most formidable athletes that season, and every play after, will come courtesy of Reebok.

UPDATE: Leading up to Veterans Day 2019, Watt decided to release his JJ Watt Valor III in honor of his grandfather who served in the Korean War. The black shoe has a camouflage bottom, the Korean War stripes on the back, and “James Watt” and his grandpa’s military division, battalion and regiment stitched into the tongue.

“All of my proceeds go to the Honor Flight which takes war veterans on a trip to D.C. to visit the monuments and brings them back home to a proper Welcome Home.”

All of my proceeds go to the Honor Flight which takes war veterans on a trip to D.C. to visit the monuments and brings them back home to a proper Welcome Home.

A tribute to the service & sacrifice of our veterans. | Designed with @JJWatt, the new JJ III Valor pays homage to those that inspire him the most. https://t.co/SR8NqXU7hh #MadeOfMany #VeteransDay pic.twitter.com/8TDwUaJnMv