J.K. Dobbins’ Father Died In Prison Before He Starred At OSU 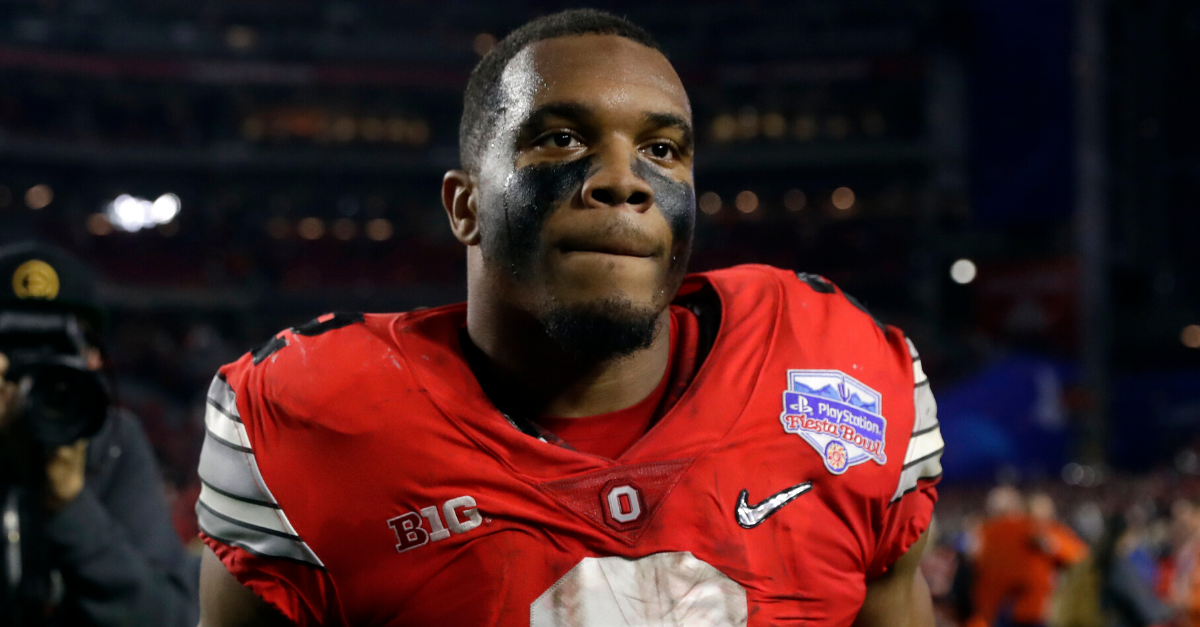 J.K Dobbins could’ve quit. He could’ve unstrapped his helmet, thrown his pads off and turned away from football forever after that devastating first carry his senior year at La Grange High School in La Grange, Texas.

Before he became the Ohio State Buckeyes All-American running back that rushed for more yards than Ezekiel Elliott and Eddie George, an uncertain Dobbins was sidelined his entire senior season in high school after breaking his leg and tearing ligaments in his ankle. The injury was potentially career-ending for the four-star recruit.

Dobbins could’ve easily walked away from the sport.

But quitting would’ve left Dobbins living with regret, just like his father did.

Lawrence Dobbins Was A Star Running Back, Too

Mya Grounds gave birth to J’Kaylin Dobbins when she was 18. His father, Lawrence Dobbins, happened to be the star running back at La Grange High School, the same school J.K. shined at. He was also an outstanding sprinter for the track and field team.

In a town of less than 5,000 people — about 1/20th of Ohio State’s football stadium’s capacity — Lawrence was the first Dobbins to turn heads on the gridiron. In 1997, he ran for a 70-yard and 74-yard touchdown in the Leopards’ state semifinal game in the Astrodome. They lost.

Lawrence’s speed took him to Lincoln University, a Division III HBCU in Philadelphia. There, he ran for the 4×100-meter relay team that nearly won a national championship in 1999. Running straight didn’t appeal to Lawrence like the thrill of football did, though.

Lawrence headed back to the Lone Star State and enrolled at Blinn College, a community college with a football program. He walked on the football team but didn’t see playing time initially.

“That was the worst thing for him, quitting the football program and not following through,” Mya Grounds, J.K. Dobbins’ mother, told Cleveland.com. “After football didn’t work, life was kind of over for him.”

Tragedy Struck When J.K. Was 15

Do you know the story of @OhioStateFB's J.K. Dobbins?@BTNJourney tells it and starts with his late father, who was a standout Texas high school football player. Part 1 of 3 … pic.twitter.com/xKvXCuwpZH

In love with the game and i thank God everyday for it. 🙏 #Crafting

Lawrence never got to see J.K. showcase his full potential on the football field.

When J.K. was 15 and set to follow in his father’s footsteps at La Grange High School, Lawrence passed away from a stroke while in Bartlett State Prison. He was 33.

Lawrence had reportedly been convicted for theft of property in 2012 and sentenced to two years in prison. Still, J.K. remained close with his father. Lawrence told him how he didn’t want his son to end up like him.

?That was probably the turning point in my life,? Dobbins told The Columbus Dispatch of his father’s death. ?I just had to grow up at a young age.?

Dobbins took after his mother’s work ethic. Mya Grounds had her son when she was just 18. She was an athlete herself, playing volleyball and basketball in high school. Motherhood got in the way of playing collegiately, however.

Grounds took classes at the University of Houston and graduated with a degree in finance. Now, she works as an accountant for the IRS to provide for J.K.’s two younger brothers.

After Lawrence’s death, Grounds said a flip switched for J.K.

He rushed for more than 5,000 yards and scored 80 touchdowns in three high school varsity seasons. He blossomed into a four-star recruit and top-50 overall recruit in the nation. The 5-foot-10 halfback fielded scholarship offers from more than 25 major NCAA schools, including Ohio State, Alabama, Florida, Oklahoma, Notre Dame, Texas, USC and Wisconsin.

He chose Urban Meyer’s OSU, where he formed a bond with Buckeyes assistant coach Tony Alford. Alford’s brother died around the same time J.K.’s father did.

?J.K. was really close with his dad,? Grounds told The Columbus Dispatch. ?The death of his dad just gave him that drive and discipline. He was competitive (before), but it seemed he was more focused and committed to being a good role model for his (two younger) brothers. He realized life is short, and let?s make the most of it. It made a big impact on the way he handled himself.?

Dobbins went on to rush for the second-most career rushing yards in Ohio State football history. He finished his senior season sixth in Heisman Trophy voting.

He announced his presence as a freshman in 2017 when he rushed for 181 yards against Indiana in his first game. Later that standout season, he turned in 174 rushing yards against Wisconsin in the Big Ten Championship Game, winning MVP honors. He wasn’t even supposed to start, but an injury to running back Mike Weber thrusted him into the role.

Now, Dobbins’ hard work is paying off. He’s likely to hear his name called in the second round of the NFL Draft as one of the best college football running backs available. Part of why he’s in this position is his late father.

“When my dad was alive he would tell me no matter what, have a smile on your face,” Dobbins told Cleveland.com. “No matter how you’re feeling, you’re living and you should be able to smile … It was not easy. I cried myself to sleep. It’s something you can’t explain to lose a parent, and I was close with my dad. I loved my dad. I have a positive outlook on life because I’m still living and I can appreciate more things in life. You’ll see me smiling. I might still be thinking about it, or in pain, but you will never know because I’m never gonna show it.”

J.K. Dobbins will most definitely smile when the young man’s drafted, and the story behind his smile will fuel him at the next level.