That's how long John Elway had waited for this moment. Fourteen years with the Denver Broncos, waiting for his moment to shine in the biggest game of the year.

Some legendary quarterbacks find success in their younger days. Tom Brady famously won his first Super Bowl in his second season in the NFL, as did Russell Wilson in 2013 with the Seahawks and Ben Roethlisberger in 2006 with the Pittsburgh Steelers. And while those names conjure visions of recent successes and NFL dominance, the opposite end of the spectrum is made up of longstanding legends.

Ahead of the 1998 NFL Season, Johnny Unitas was the oldest quarterback to win the Super Bowl, taking down the Dallas Cowboys in Super Bowl V. Historians of the game will also challenge this feat a bit, due to the fact that Unitas was pulled from the game after getting injured and throwing nine passes that included three completions, a touchdown and two interceptions before Earl Morrall replaced him. For those keeping score at home, Morrall was 36 years old at the time, falling a year short of Unitas.

But John Elway was looking to take that top spot, although the record was probably not on his mind at all. Instead, John Elway was four quarters away from winning the only piece of hardware that had eluded him his entire career: The Lombardi Trophy.

And the former No. 1 pick was going to sacrifice everything he could in order to lift it. 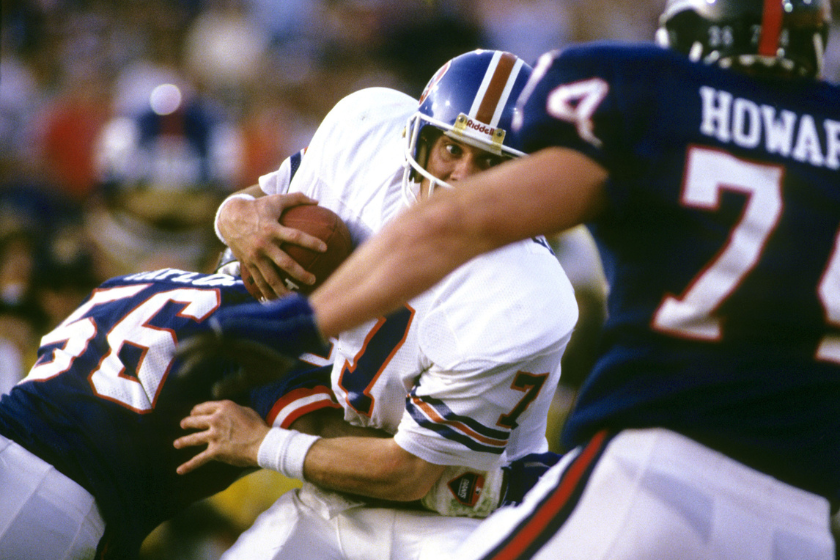 In his 15 years leading up to Super Bowl XXXII, John Elway had led the AFC's Denver Broncos to three Super Bowl losses in his early career.

In Super Bowl XXI, Elway's Broncos ran into the Big Blue Wrecking Crew, as the New York Giants torched the Broncos, 39-20. The next season, Elway brought Denver back, but the Broncos were dismantled even worse than the year before, as Washington sent them home packing, 42-10. But the worst was yet to come.

Two years later in Super Bowl XXIV, the Denver Broncos suffered the worst loss in Super Bowl history to the San Francisco 49ers, who were led by Hall of Famers Joe Montana and Jerry Rice, the latter of whom had seven catches for 148 yards and three touchdowns. With the final score of 55-10, the Broncos packed up their things and returned to Denver, exhausted. It would be eight long years between that brutal defeat and Super Bowl XXXII.

If reading all of that gave you a twinge of pain in your heart, I should remind you that this story has a happy ending. Without a worthy adversary, a hero's quest is nothing more than a boring story. But this one, the story of John Elway reaching his Holy Grail? This is one of the best of all time. 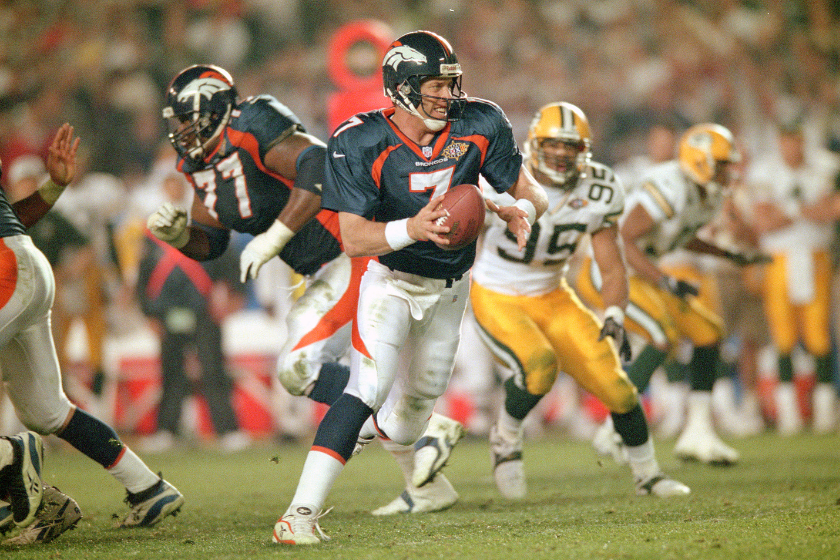 With the hopes of becoming the oldest quarterback to ever win his first Super Bowl and to scrub the dark mark of three Super Bowl defeats from his resume, John Elway took the field to put everything on the line to win Super Bowl XXXII against the NFC Champion Green Bay Packers. Brett Favre and his winter warriors from Lambeau Field made formidable opponents for Elway's Broncos. Entering the game as defending Super Bowl Champions after beating the New England Patriots in Super Bowl XXXI gave Favre and head coach Mike Holmgren a bit of an edge. They knew what it took to win the final game of the season.

But they didn't know just how far Elway was willing to go to leave San Diego a champion.

On a 3rd-and-6 from the Green Bay 13-yard line, Elway, setting up in a shotgun formation takes the snap. All night, Green Bay's secondary had been stifling the Broncos' aerial attack, and this play was no different. Seeing his options limited through the air, Elway took off, scrambling through the Packers' defensive front. As he gets to the 10-yard line, Elway tucks the ball under his arm, signaling to everyone he's going to run the ball into whatever stands in his way.

What was standing in his way were three Green Bay defenders ready to pounce.

In a split second, Elway leaps towards the end zone right as the three Green Bay defenders converge on him. Elway manages to stay above them all, but helicopters his way beyond them and down to the three-yard line for a Denver first down.

Up in the broadcast booth, longtime broadcasters Dick Enberg and Paul Maguire lose their minds. "Is he only 37?!" Enberg asks his fellow commentators. Maguire responds with, "How important is this football game? How badly does John Elway want to win this football game? When you see [other] quarterbacks go down, not Elway."

As he gets up and returns to the huddle after one of the greatest plays in football history, Elway is giving his teammates high fives and is yelling to his sideline. This is the moment that true leaders cement their legacies. In this moment, former NFL MVP John Elway is leading by example saying, "This is what I'm willing to do to win this thing. This isn't the playoffs. This is the Super Bowl. What are you willing to put on the line?"

While the game wasn't over, and Elway still had to complete a game-winning drive in the fourth quarter, it is this moment that sticks with football fans. When John Elway, the 37-year-old quarterback who spent his entire career with the Denver Broncos and was aching for a Super Bowl title, put his career on the line for his team, he cemented his legacy as a legend, win or lose.

John Elway needed a first down. "The Helicopter" happened next. ?

Before the game, Phil Simms, the quarterback of the New York Giants who defeated Elway in his first Super Bowl appearance, summed up why this moment was so important, a full three quarters before it took place.

"Denver has hope because of John Elway."

Not only did Denver have hope because of John Elway, but they also have two Super Bowl rings thanks to him: this one from Super Bowl XXXII and one from the following year in Super Bowl XXXIII. Pretty good for the then-oldest quarterback to win a Super Bowl in NFL History. After all, there's no better way to end a Hall of Fame career than with two back-to-back Super Bowl wins.