Jordy Nelson Retired Early, But Where is He Now? 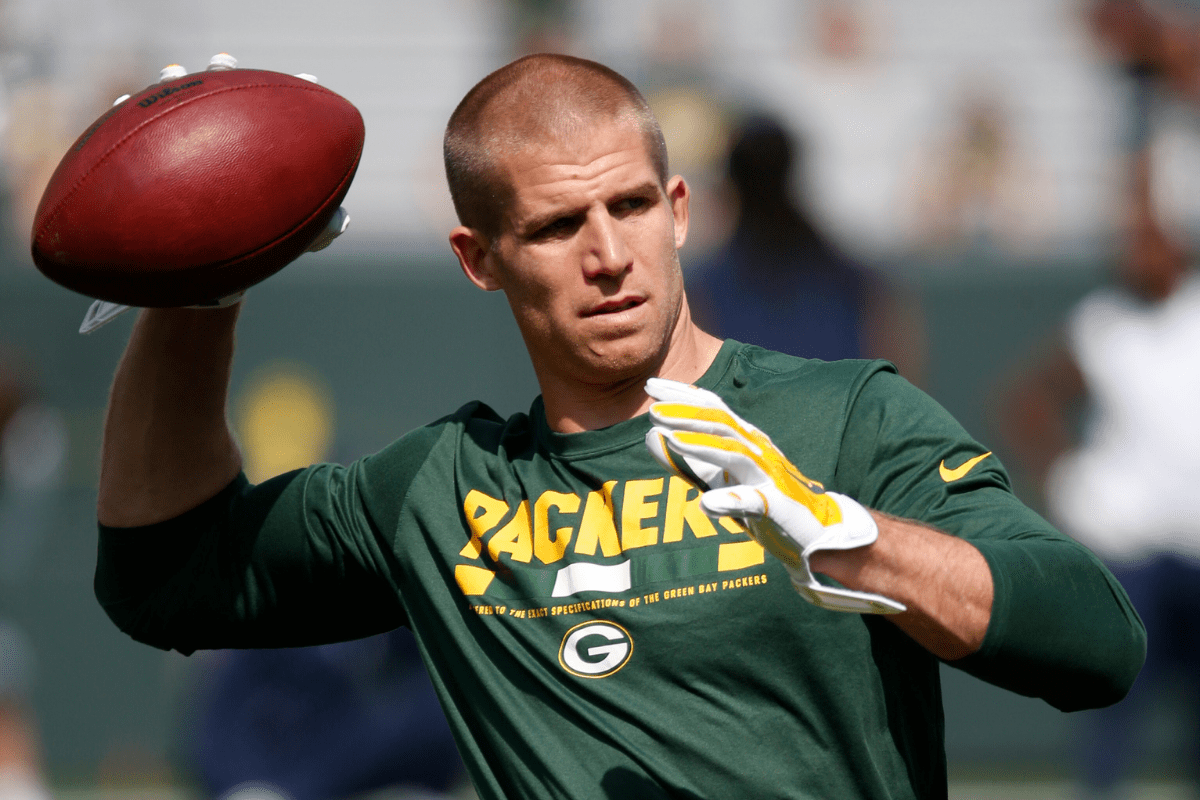 Some buddies just go better together.

Aaron and Jordy are two such buddies. Aaron is part-time Jeopardy! host and full-time Green Bay Packers quarterback Aaron Rodgers. Jordy is Jordy Nelson — Aaron’s best bud and No. 1 receiver. Well… that’s the way it used to be, at least.

Aaron may still be chasing rings, but Jordy hung the pads up for good. The dynamic duo started scoring in 2008. After a decade of receiving touchdowns, accolades, and a Super Bowl, the famous pair split.

After spending a season a Raider during his post-Pack break-up, Jordy Nelson needed closure. He signed a one-day contract with the Packers in 2018. Nelson reunited with Rodgers and retired from the NFL.

Rodgers kept playing and formed a new bromance with Davante Adams. Nelson has watched his old fling fling it to someone new from the sidelines since 2018, but Jordy’s not jealous.

Former Packers wide receiver Jordy Nelson retired at 33 and is living the dream in his native Kansas. Nelson was raised on a family farm; a family farm is where he intends to raise his own.

Early Life on the Farm

Jordy Nelson was born in Manhattan, Kansas, which is nowhere near as metropolitan as it sounds.

He was raised on a family farm. Teamwork is indispensable to farm life survival and Nelson was a team player from a young age. He played quarterback for his high school, as well as running back, wide receiver, basketball point guard, and track.

In his last year of high school ball, he rushed for more than 1,500 yards. While playing quarterback. Nelson has always had that farm boy strength.

But strength doesn’t equal scholarships. Nelson walked on at Kansas State University in 2003, but didn’t see any playing time until 2005. He had three solid regular seasons at K-State culminating in All-American honors his senior season.

Nelson’s development as a wide receiver earned him a higher draft pick than ESPN could have predicted when he walked on in ’03. After his last season, Nelson was selected by the Green Bay Packers in the second round of the 2008 NFL Draft.

It was time for the farm boy from Kansas to pack his bags and move to the big city. Green Bay, Wisconsin, was waiting for him.

Jordy Nelson has officially retired as a member of the @Packers.

Some of the WR’s BEST moments in the green & gold. ⬇️⬇️ pic.twitter.com/8NAlvhn4l4

RELATED: The Legendary Play That Put Jordy Nelson in My Hall of Fame

Jordy Nelson joined a Green Bay team in transition. Brett Favre retired just the year before, leaving the reigns to an exciting but inexperienced Aaron Rodgers.

Hopes were high, but Cheeseheads held their breath. Favre left large cleats to fill, and Aaron Rodgers was just some hippy from SoCal.

Nobody in Wisconsin was sure how the new look Packers would look.

Nelson made his rookie debut against the Minnesota Vikings, but it took a few seasons for Nelson and Rodgers to establish their connection.

By March 2011, they had already won Super Bowl XLV. Both players started in the championship win over the Pittsburgh Steelers. By 2013, Nelson was averaging more than 1,000 receiving yards per season. By 2014, Nelson was named to his first and only Pro Bowl.

Rodgers and Nelson describe their connection as automatic, unspoken, and subtle. They communicate the way any great duo does: often non-verbally, with just a look. The tandem was almost always on the same page and produced highlight reels week after week in the NFC.

Unfortunately for Nelson, those days came to an end during a pre-season game in 2015. With a silent twist and pop, Nelson tore his ACL. He missed the rest of the 2015 season recovering from his knee injury.

The Nelson-Rodgers (& Occasionally Randall Cobb) Connection came back with a vengeance the following season. Nelson caught 14 touchdowns and won NFL Comeback Player of the Year in 2016. The Pack performed and made a deep playoff run. Nelson sat the first round against the Dallas Cowboys due to an injury sustained against the Giants.

(Atlanta went on to blow a 28-3 lead against the Patriots in the resulting Super Bowl. It has nothing to do with Nelson, but it is a fact worth remembering.)

2017 was Nelson’s last year in Green Bay, to the joy of Chicago Bears fans everywhere. With his age rising and body in decline, the Packers released Nelson as a free agent. Rodgers was pissed, but the play call came from over his head. Nelson took the drop in stride and signed a two-year deal with the Oakland Raiders, a team so ominous they literally represent themselves with a Black Flag.

Nelson spent one so-so season a Raider before deciding to jet. New York wasn’t on Nelson’s mind, though he would eventually find his way back to Manhattan. He ignored offers from the Seattle Seahawks and Kansas City Chiefs because his heart was set on Green Bay. Nelson either wanted to sign with the Packers or retire. He ended up doing both.

Nelson signed a one-day training camp deal in 2019. He returned to Wisconsin and retired a Packer alongside the QB who had helped Nelson snag so many damn touchdown receptions.

The training-camp contract was ceremonial. Rumors swirled that Aaron wanted Jordy back for real, but the bromance was not meant to re-kindle.

Nelson retired in Green Bay and left the NFL behind for good.

Back on the Farm

Aside from growing up in the field, the Pro Bowler spent NFL offseasons lending a hand on his brother’s farm. For Nelson, farming is the dream. And my man Jordy is living it.

Nelson lives on a farm back home in Kansas with his wife and two sons. The receiver now passes life lessons along to his children about the value of hard work and responsibility. Nelson may be worth $25 million, but he still works his 12-hour farm shifts, just like everyone else.

Jordy occasionally makes it to K-State for home games and still spends quality time with his old teammates. While his old buddy Aaron may be busier than ever, Jordy Nelson has returned to his rural roots. And that’s just fine with Jordy. He remembers his connection with Rodgers fondly, but has no desire to re-ignite the flames that once burned between them.

Some bromances are meant to last and others to fizzle. Packers fans are just happy they witnessed the Rodgers-Nelson friendship at its very brightest, even if it was snuffed out too soon.

MORE: Nobody Rocks a Mustache Quite Like Aaron Rodgers