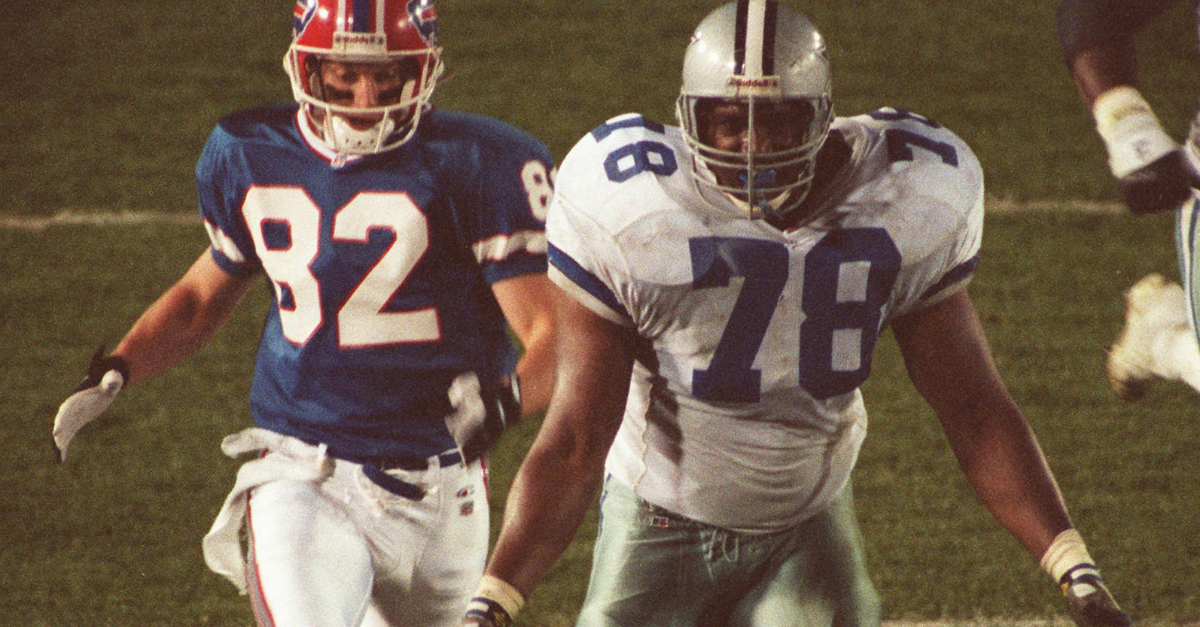 Super Bowl XXVII was a runaway. Dallas Cowboys quarterback Troy Aikman took home MVP honors when he torched the Buffalo Bills for 273 yards and four touchdowns. Garth Brooks sang the National Anthem, Michael Jackson shined during the halftime show, and the Cowboys forced a Super Bowl record nine turnovers. Dallas beat down Buffalo by the final score of 52-17, which started a run of three Super Bowl titles in four years.

The game is known as the official beginning of Dallas’ run of dominance in the 1990s behind Aikman, Emmitt Smith and Michael Irvin, but it’s infamously remembered for the funniest play in Super Bowl history. For that story, you have to meet defensive tackle Leon Lett.

Few players in NFL history have a story quite as ridiculous as Leon Lett. After being drafted in the seventh round of the 1991 NFL Draft, the Mobile, Alabama native blossomed into one of the biggest and most fearsome defenders in the NFL. He was hard to miss standing 6-foot-6 and weighing 290 pounds, but his agility and flexibility to play anywhere on the defensive front made him one the Cowboys’ key defensive weapons.

In 121 career games, Lett recorded 22.5 sacks, 128 quarterback pressures and seven fumble recoveries. He was also suspended multiple times for violating the NFL’s substance abuse policy, which included a 16-game ban split between the 1996 and 1997 seasons. Today, he works as a defensive line coach for the Cowboys under Jason Garrett.

Defensive tackles coach Leon Lett is returning to the #DallasCowboys staff with a new contract.

With a 35-point lead in the fourth quarter of Super Bowl 27, the disruptive force for Dallas’ defense had his chance to shine when Bills backup quarterback Frank Reich, who replaced injured starter Jim Kelly, fumbled the football right at Leon Lett’s feet. The big Cowboy scooped up the ball and “sped” 64 yards for what would have given Dallas the record for the most points in a Super Bowl.

Lett showboated on his way to score, and Bills receiver Don Beebe gave every young football player the prime example of what it means to never give up on a play. He knocked the ball loose, which rolled out of the end zone for a touchback, and Leon Lett stamped his way onto every highlight reel for the rest of time.

“Leon came to the sidelines, and I said, ‘Man what happened?’ He said he was watching the jumbotron, and he was trying to do “The Michael Irvin” where he put the ball out across the goal line. And he didn’t see Don Beebe. At the time it would’ve been a Super Bowl record for points. But 52 of ’em? It’s hard to be upset.”

You’d think after a huge, embarrassing blunder that Leon Lett’s days on the “Not Top Plays” list would be over, right?

Wrong. The very next season on Thanksgiving Day of 1993, the Cowboys met the Dolphins during a rare snow storm in Dallas. Late in the game, Dallas blocked a field goal that would have sealed the deal with the 14-13 lead. But wouldn’t you know it, big Leon Lett charged the ball trying to recover it, fell on his backside, and the Dolphins recovered. Miami’s Pete Stoyanovich would re-kick, and make, a game-winning field goal as time expired.

Somehow, Leon Lett once again found his way onto the list of the “Worst Plays in Sports History.”

25yrs ago today Leon Lett in the snow on #Thanksgiving pic.twitter.com/wIp69huhFx

While only one blunder cost his team the game, Leon Lett’s Super Bowl gaff remains one of the funniest moments in NFL history. The two-time Pro Bowl selection and three-time Super Bowl champion might have a few bad highlights on his resume, but in the words of Michael Irvin: It’s hard to be upset with three rings.