It's hard to forget Michael Oher's incredible life story. Born to Denise Oher and Michael Jerome Williams, "Big Mike" struggled in his early years just to survive--his mother battled drug addiction while his father was in and out of prison. Beginning around age 7, Oher starting bouncing between foster homes and even spent time homeless around Memphis, Tennessee.

Gaining admission to Briarcrest Christian School changed Oher's life. Head football coach Hugh Freeze saw Oher's massive size and potential, grooming him into one of the best offensive line prospects in the country. Not only that, but the kindness of the Tuohy family landed Oher a solid home and loving family.

Oher's journey was first chronicled in the book "The Blind Side: Evolution of a Game" by Michael Lewis but was popularized in the film "The Blind Side." Directed by John Lee Hancock and nominated for Best Picture at the Academy Awards, the 2009 hit starred Quinton Aaron as Michael Oher and brought in over $300 million at the box office.

The film ended as the Ole Miss Rebels standout was selected No. 23 overall by the Baltimore Ravens in the 2009 NFL Draft. But when the curtain closed, what happened to Michael Oher? 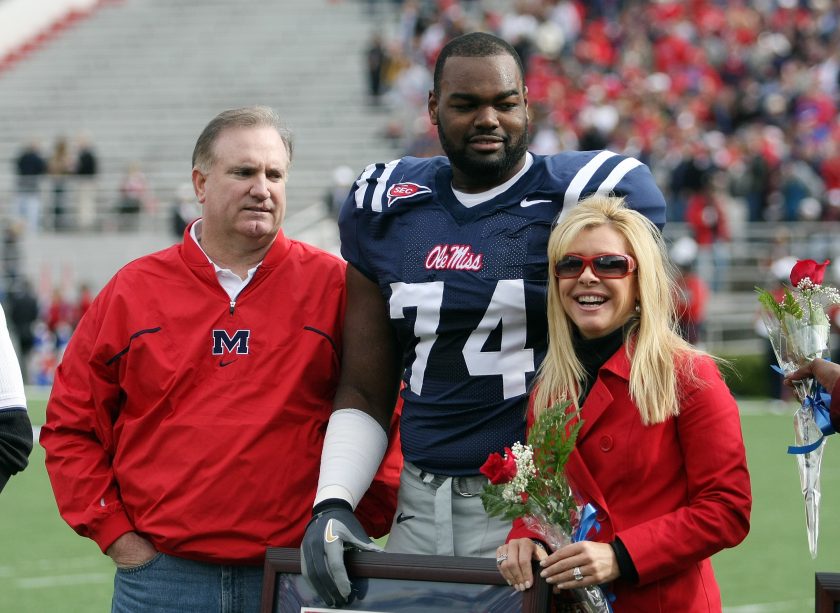 His God-given talent was obvious, but Oher's unstable upbringing put him behind the curve in the classroom. Eventually raising his GPA above the NCAA's minimum requirements, Oher chose to attend the University of Mississippi--the U.S. Army All-American was rated as a five-star prospect and the 38th-best high school football player in the country. Though recruited by current LSU head coach Ed Orgeron, Oher ultimately signed with the Rebels shortly after Hugh Freeze joined the Ole Miss football team's staff in 2005.

Oher made an immediate impact. He began as Ole Miss' starting guard and earned Freshman All-American honors before shifting to left tackle. Oher earned All-SEC honors in each of the next three years playing on teams with future National Football League standouts such as linebacker Patrick Willis, defensive end Greg Hardy and all-purpose star Dexter McCluster.

Oher earned Unanimous All-American honors during his senior year, was a finalist for the 2008 Outland Trophy as college football's best interior lineman and graduated with a degree in criminal justice from Ole Miss. 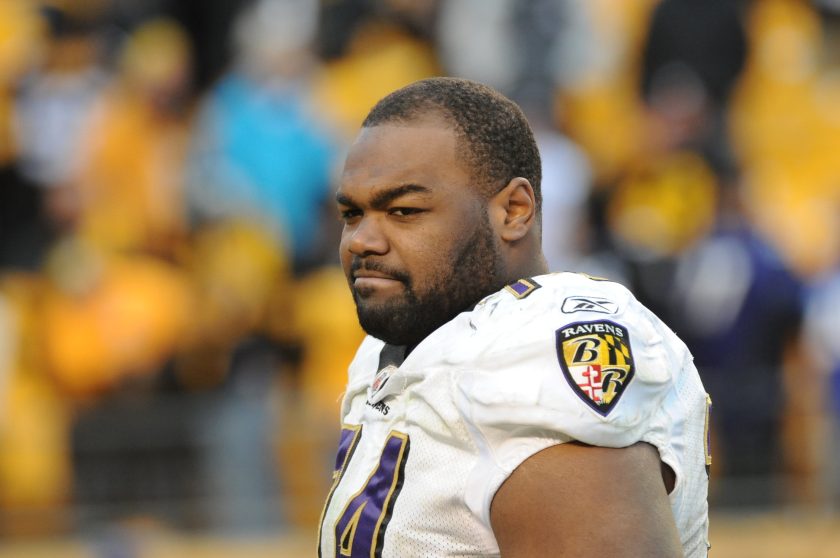 Oher heard his name called in the first round of the 2009 NFL Draft in New York City.

The first-round pick signed a five-year contract with the Ravens, started all 16 games as a rookie and finished second in the AP Offensive Rookie of the Year voting behind Minnesota's Percy Harvin. Oher's versatility allowed him to start at both left and right tackle for the Ravens, and in 2013, "The Blind Side" star won Super Bowl XLVII as Joe Flacco, Ray Lewis and company downed the San Francisco 49ers, 34-31.

Oher then signed a four-year, $20 million contract with the Tennessee Titans prior to the 2014 season. However, injuries and a drop in production ultimately forced the team to cut him the following spring.

As always, he persevered. Oher signed a two-year deal with Ron Rivera's Carolina Panthers to protect Cam Newton's blind side ahead of Superman's MVP season in 2015. Oher allowed a career-low four sacks and reached Super Bowl 50, which Carolina lost to the Denver Broncos. Oher signed a $21.6 million extension that offseason but appeared in just three games in 2016 and landed on injured reserve, this time due to a concussion.

Oher failed his physical prior to the 2017 campaign and was made a free agent for the final time. Oher started 110 games over eight NFL seasons as an offensive tackle, but the famous NFL player never reached a Pro Bowl.

He made more than $34 million in the NFL, per Spotrac.

How 'The Blind Side' Affected Oher's Career 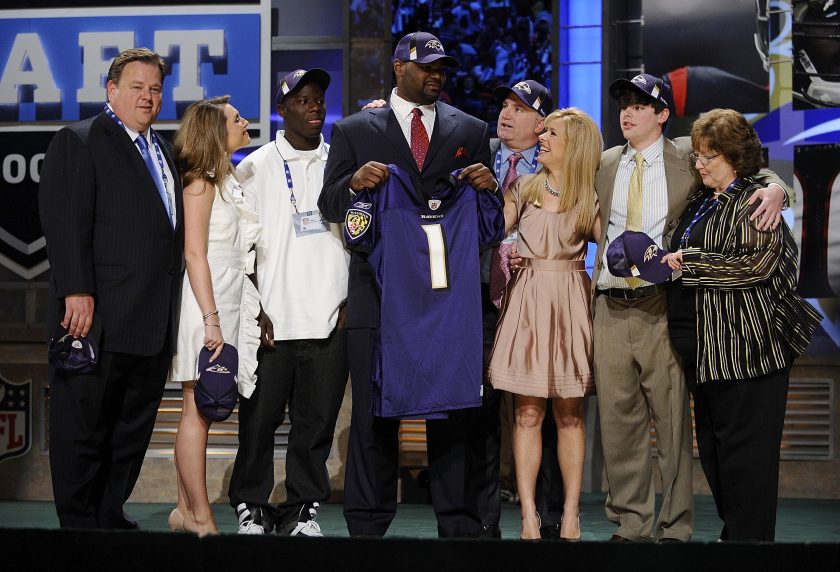 RELATED: Leigh Anne Tuohy From 'The Blind Side' is Worth Millions Today

In a 2015 interview, Oher stated that the movie's incredible reception ultimately hindered his development as a football player. Oher believed many people were overly-critical of his play and expected so much from him given the film's success.

"I'm not trying to prove anything. People look at me, and they take things away from me because of a movie. They don't really see the skills and the kind of player I am. That's why I get downgraded so much, because of something off the field.

"This stuff, calling me a bust, people saying if I can play or not ... that has nothing to do with football. It's something else off the field. That's why I don't like that movie."

Several details were exaggerated in the made-for-Hollywood movie (as with most films), which didn't exactly help the scrutiny Oher faced during his playing career.

Oher co-authored a book titled "I Beat the Odds: From Homelessness, to The Blind Side, and Beyond" with help from Don Yaeger. The former All-American opened up, in his own words, about surviving a rough childhood in foster care, the Tuohy family formally adopting him, and how important seeking role models was for his growth, not just as a football player but as a man.

Where Is Michael Oher Now?

Shortly after being placed in concussion protocol, Oher was arrested in May 2017 after allegedly attacking and biting an Uber driver following a night out in Nashville. The charges were eventually dismissed after an "agreement from the alleged victim," according to The Tennessean.

Today, Oher's NFL career may be over, but he's as active as ever in helping those in situations similar to his own.

Oher created the Good Deeds app in partnership with DevDigital LLC as a platform for anyone willing and able to give back. Users create a profile, post what and how much they are able to donate, and they are connected with those in need based on a profile match. The social networking app has a five-star review on Apple's App Store.

The inspiration for "The Blind Side" is very active on both Twitter and Instagram, offering motivational quotes, as well as shouting out members of his adoptive family, including parents Leigh Anne Tuohy and Sean Tuohy (played by Oscar-winner Sandra Bullock and Tim McGraw in the film) and siblings Collins Tuohy Smith and SJ Tuohy.

Today, Michael Oher's net worth is an estimated $16 million, according to Celebrity Net Worth.

Michael Oher's rise as an offensive lineman captured our attention, but it's real life after football where his true character and willingness to give back is shining brightest. 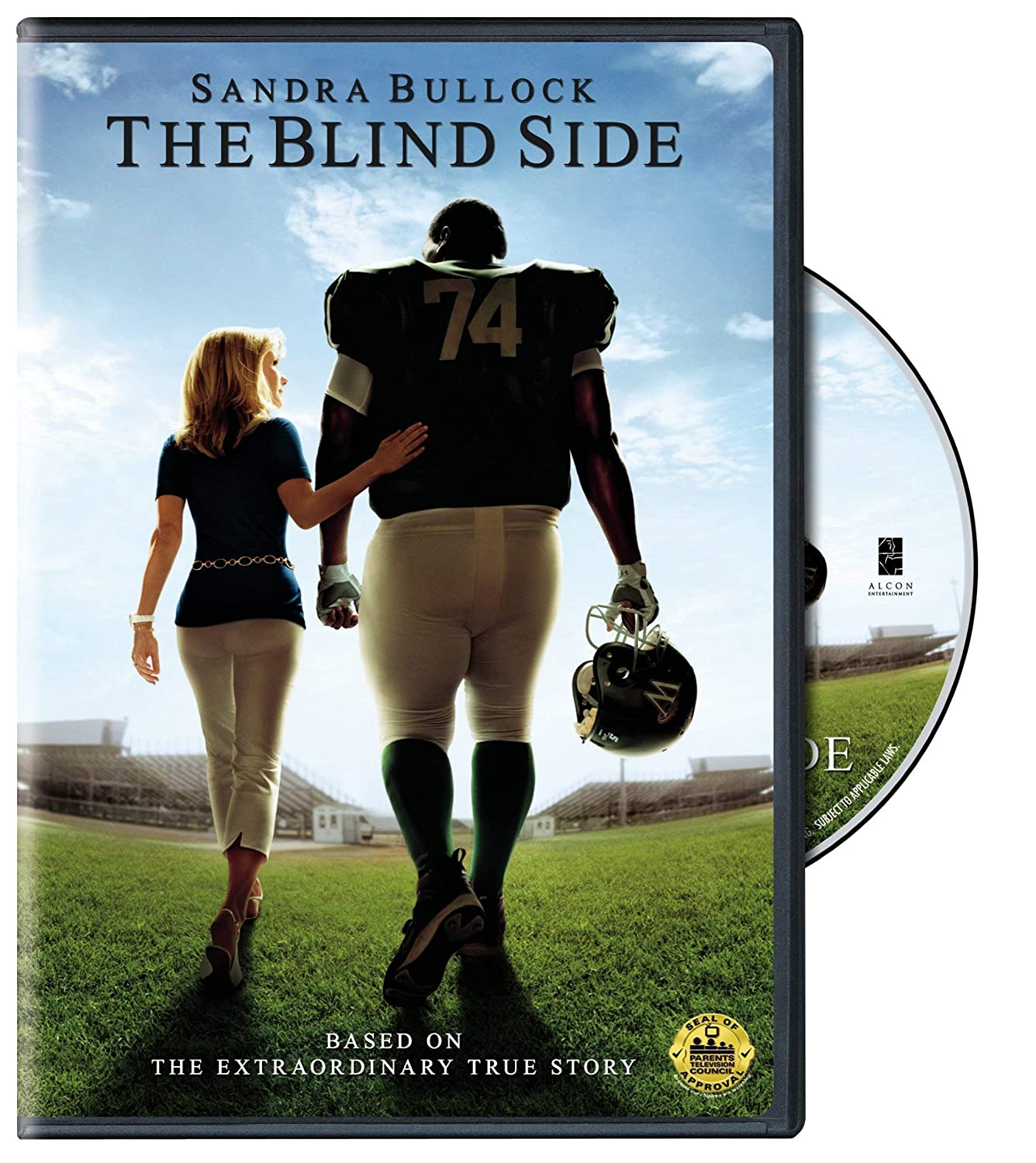 MORE: Collins Tuohy From 'The Blind Side' Married a College QB & Son of a Billionaire