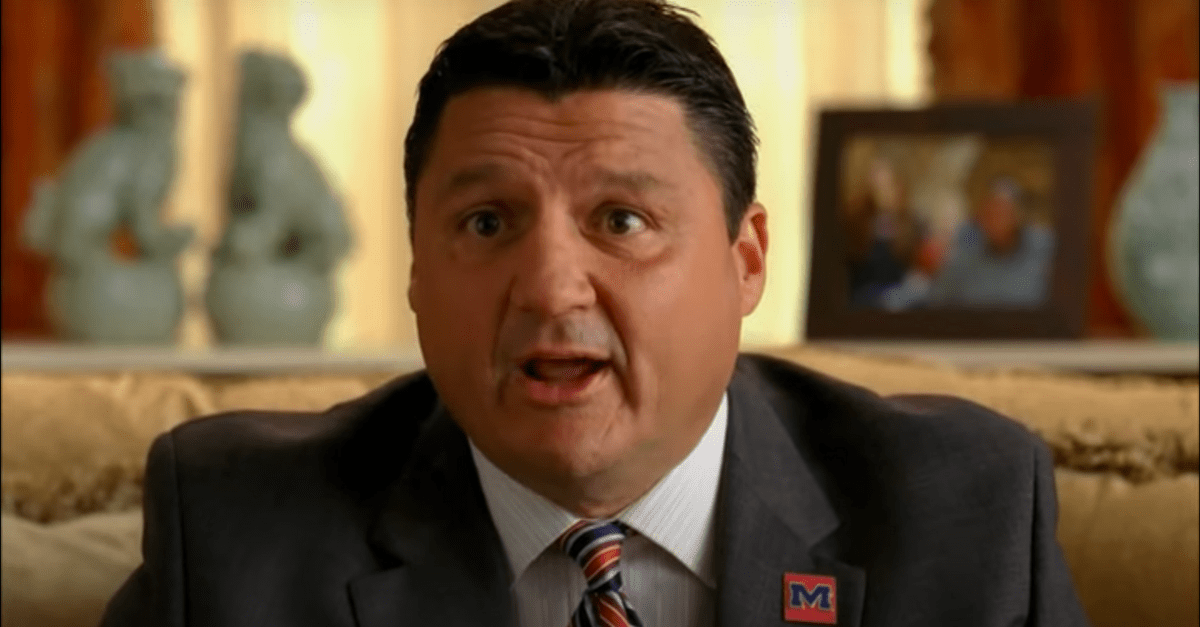 We now know and love LSU head coach Ed Orgeron for his Cajun background, his one-of-a-kind voice and passion for the game of football. He captivated all of our hearts during LSU’s 2019 national championship season and proved there aren’t many coaches in all of football quite like him.

Coach O is a lot of things. He’s a hell of a recruiter. He’s a national championship coach in the SEC, which is no easy feat. He’s a father to three children, who, by the way, all aspire to be like him.

But did you also know he’s a darn good actor who starred in an Academy Award-nominated movie?

Yes, before he took over at LSU, he starred in Hollywood in The Blind Side, the 2009 film based on the true story of Michael Oher and his path from a Memphis housing project to NCAA All-American and NFL star with the Baltimore Ravens.

Who Were The Coaches in The Blind Side?

Nick Saban refused to wear LSU clothes in “The Blind Side” because he was then Bama’s coach. He lost Michael Oher to Ed Orgeron & Ole Miss. pic.twitter.com/JX2HvY80mH

Even Hugh Freeze, who coached Oher in high school and took him in, makes an appearance, just not as himself.

Orgeron, however, stole the show.

Ed Orgeron?s Role in The Blind Side

Orgeron is welcomed in to the Tuohy family home by Leigh Anne. He’s tasked with convincing Oher (Quinton Aaron) and the Tuohys’ young son, Sean Jr., to come play for the Ole Miss Rebels football team after becoming a top recruit at Briarcrest Christian School.

Leigh Anne tells him LSU is out because everyone knows Saban is heading to the NFL. She then tells Coach O that on Oher’s first two recruiting trips “someone took him to a titty bar,” despite still being in high school.

Orgeron then tells her he heard Sean Jr. can “really pepper the gumbo” because he’s quite the negotiator. That line is so Coach O.

“You can go to a gas station to get the best barbecue you’ve ever gotten in your life. It’s a wonderful place to live,” he tells Oher of Mississippi during his pitch. “Fried catfish, all the good food that we love to eat in the South…you’re gonna have it there. I promise you.”

Hm, that sounds a lot like Orgeron’s shrimp story with Joe Burrow. Orgeron then goes back and forth with Sean Jr., who tells him Tennessee has already offered him to run onto the field and flip the coin. Orgeron then gives a look of disgust.

RELATED: Ed Orgeron Once Secured a Top Recruit By Visiting Him at 4 A.M.

Bravo, Coach O. In my opinion, he deserved an Academy Award or an Oscar or Golden Globe or something. Not Sandra Bullock.

What’s funny is that Orgeron said people would approach him afterward and recognize him for his role in the movie, not for anything football-related.

The Blind Side was released in 2009 but was based off a story that took place years prior. The movie came a few years after Michael Lewis’ 2006 novel, “The Blind Side: Evolution of a Game.”

Obviously, not every coach was still in the same position at the time as they were when the real events took place. Orgeron was fired from Ole Miss in 2007 and had been an assistant coach at Tennessee at the time. Nick Saban, for example, left the NCAA for the NFL’s Miami Dolphins but by 2009 was already Alabama’s head coach. Yet his office in the movie was plastered with LSU memorabilia.

I like Ed Orgeron because I've seen The Blind Side. pic.twitter.com/QkOYeHTS6B

It wasn’t just fans who gawked over the coach who was still in his 40s at the time.

Director John Lee Hancock, who directed movies like “The Alamo” and “The Rookie”, first contacted Orgeron about playing the role. Orgeron was actually Oher’s coach at Ole Miss from 2005-07 and won the offensive lineman’s services over many other SEC schools.

Orgeron filmed some lines for Hancock initially and he fell love with Orgeron’s enthusiasm.

“Ed put himself on tape and was fantastic,” Hancock told ESPN. “Once you get one, you’re committed to all of them playing themselves.”

Watching The Blind Side and I completely forgot Ed Orgeron was in it and now it’s officially the greatest movie of all-time. pic.twitter.com/QZ1ZviFW9v

Coach O is a real impressionable guy, and he had that same affect on the real life Leigh Anne Tuohy.

She told the Deseret News that she was happy to see Orgeron win a national championship at LSU years after coaching Oher at Ole Miss.

“It was a tough call for us because (Clemson head coach) Dabo (Swinney) is a dear family friend, but so are Ed and Kelly (Orgeron?s wife). So we cheered for both of them but I was very happy for Ed. He has spent ?a lot of time in the gym,? as we say in our family. He has done a lot of Xs and Os in his lifetime and worked very hard for that. So I was excited for the family. He?s got bright kids, a wonderful wife and he?s just a good guy. His antics and personality are not typical of everyone, but he has stayed true to that. That?s how he was when he coached Michael for three years and that?s how he is now. You don?t have to like him but that?s who he is. I love that he has stayed true to that and not changed who he was and how he is for the system or for people or anyone else. I just think that?s awesome.”

I mean, what can’t Ed Orgeron do?