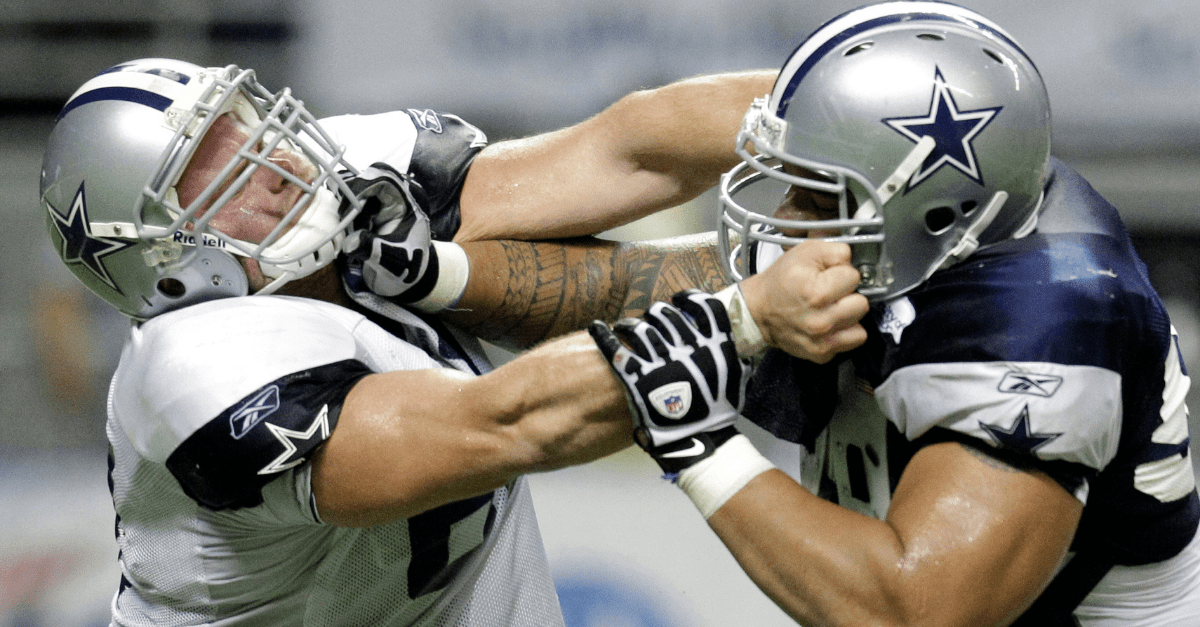 Football is changing. The game you grew up watching and playing is a shell of what it used to be. Full-contact drills that helped teach me and all my friends growing up how to make, and take, hits are becoming a thing of the past. Now, rolling tackles using padded dummies and low-impact practices are taking over to help save the game for future football players.

As the National Football League spearheads changes to how the game is taught, the league and NFL coaches have come together to eliminate three iconic drills prior to the start of 2019 training camps. While the decision is meant to decrease concussions and save NFL players’ brains, it’s making the league look softer than double-ply Charmin toilet paper.

According to multiple sources, the NFL decided that the Oklahoma drill, the Bull in the Ring (you might’ve called it King of the Circle), and the half-line drill will no longer be part of practices moving forward. The decision was reached by multiple football coaches, as well as NFL league offices.

The NFL is outlawing 4 drills, including, Oklahoma and Bull in the Ring. Was a result of a forum the league held on 4/17 to discuss training camp drills for linemen.

Among those in Atlanta for that forum last month. ⬇️ pic.twitter.com/Um90knmTdC

Easily the most iconic of these bans is the Oklahoma drill. Invented by famed Oklahoma Sooners head coach Bud Wilkinson, a three-time college football national champion in the 1950s, the drill has multiple variations, but traditionally puts two players against each other within a small, confined space. The objective is for the offensive lineman to open a lane for the ball carrier behind him, while a defensive lineman tries to tackle the running back.

Rather than adapt the old school drill, like Detroit Lions head coach Matt Patricia did, the NFL tossed it in the trash.

The half-line drill is pretty self explanatory; only half of the offensive and defensive lines are on the field, which helps players learn to pick up blocks and running backs see these plays develop at full speed.

The Bull in the Ring drill is super popular and was one of my high school football team’s favorite drills to help build team chemistry. Two players, usually ones who are in position battles against each other, go head-to-head trying to push the other out of the circle.

I get it. NFL teams are trying to save their brand. But this isn’t old school football that I grew up loving anymore. The NFL is putting player safety and head injuries as its highest priority, and rightfully so; Without players, there’s no product to put on the field. But banning tackling drills that build character and grit, especially in youth football, feels wrong since this is the purest form of America’s favorite sport

These drills are about toughness, but the NFL doesn’t want “tough” anymore.